by Francesca Re Manning 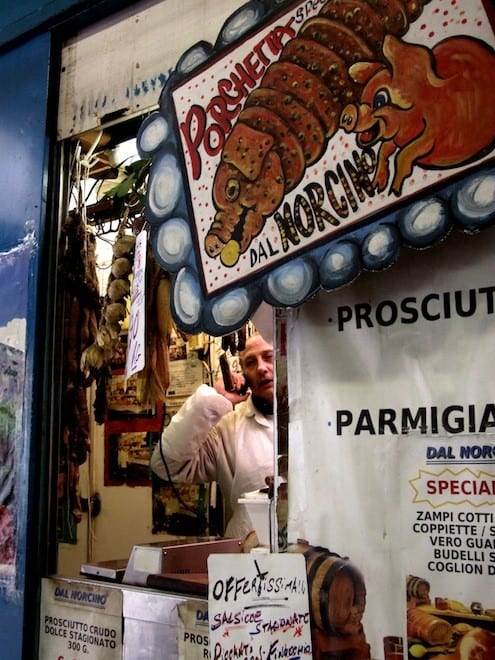 Francesca Re Manning is a food lawyer, food writer and…

Rome is famous for many things and I don’t need to list them. But one thing some people might not be familiar with is its offals, also called “quinto quarto”, the fifth part left from the four parts of the animal thus everything else other than the front and the back. These include tripe, lungs, hearts, liver, tail, brain and tongue.

The traditional ways  of cooking those “delicacies” listed above are either stewed in tomato sauce or fried. I adore them when they are fried but probably because, as my grand-father used to say, “even a shoe sole would taste good if fried”. Romans though don’t  fry simply offals. They fry almost anything!

Two surprises awaited me last time I visited the Capitol: scamorzine fritte in mortadella and ricotta fritta. The first ones are simply small chunks of scamorza (a stringy sheep cheese often smoked) wrapped in mortadella and then coated in a very light batter and fried. They had been previously fried and didn’t need to be fried again when we order them – simply warmed up in the oven and “ecco!” ready to be slurped up in one bite! Divine.

The other ones are small balls of ricotta (half fresh and half stagionata) coated in the same batter and fried. I was told you can also use “smoked ricotta” to give it that extra dimensional flavour. Not to be missed! You can find them both almost anywhere but I would recommend Volpetti in Testaccio, the old abbatoir area of Rome where still now one can eat the best meat (and offals) of the city.

The second surprise was “trapizzini“, something in between a tramezzino (soft bread triangular shape sandwich) and a pizza. The idea is to have a pizza dough triangular piece of bread which gets cut on one side and stuffed according to your choice – no vegetarian option here I’m afraid! We tried “salsa verde and tongue” (a sauce made of parsley, hence “green”, olive oil, capers, anchovies and a touch of salt) and “coda alla vaccinara” (ox tail stewed in tomato sauce, chilli and black pepper). 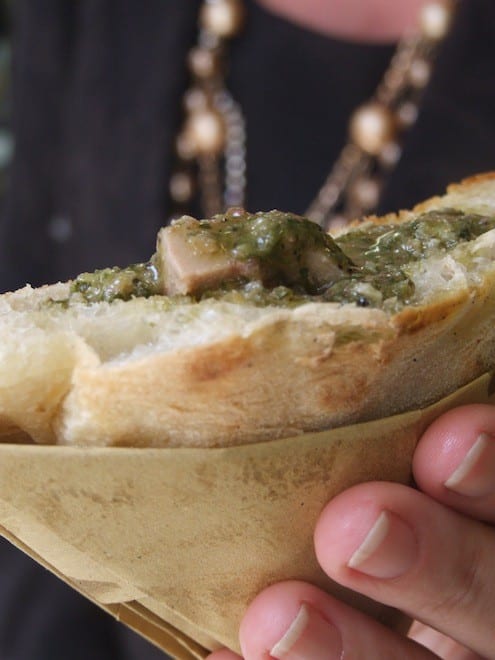 The hole in the wall where you can try these funny little fellows is on the parallel road to the square where the main market in Testaccio takes place every day (which also happens to be the perfect place to buy artichokes, courgette flowers and green cauliflower – very unique to this area).

I was told the secret for the perfect “salsa verde”. See the recipe below.

You will find many variations around salsa verde – boiled potatoes, eggs, anchovies and even gherkins! However, the authentic salsa is very simple and should not have too many flavours in it to make it as adaptable as possible. My mother used to immerse anchovies in this sauce and the fact that it wasn’t too strong in flavour meant that the final result wasn’t too salty.

It can be kept in the fridge up to a few months – not much longer as the oil might acquire a rancid taste.

Francesca Re Manning is a food lawyer, food writer and photographer with a big passion for any culinary tradition. She is Italian and lived great part of her life in Siena, Tuscany. After a few years of meandering around the world, she has made Cambridge, England, her home even though her job takes her constantly around the globe.

A Dinner of Eights: Eit Restaurant in Rome, Italy