Pasta is a well-known symbol of Italian cuisine. Discover its history and how to best enjoy it, just like an Italian would. 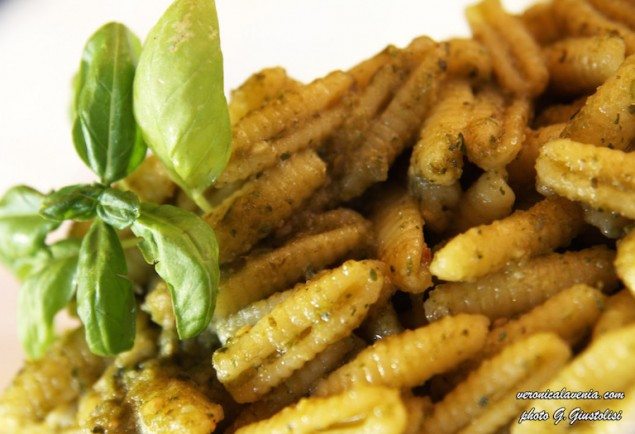 all photos by G. Giustolisi

My love for food started from a pasta dish. I watched while my mother, an excellent cook from whom I inherited the passion for cooking, as she prepared delicious meals. They were always different, and she paid great attention and the care to cook even the most seemingly simple dishes, such as pasta, and I learned by observing and memorizing her gestures.

I especially liked to wait for the water to boil, and then, while the pasta was cooking, I stared at the pot, contemplating the delicious dish to come. Trying stray noodles was another inevitable rite to make sure the pasta was al dente. The fact that my mother would take my advice on doneness, when I was only a child, meant a lot. Growing up, I realized she wanted, slowly, to involve me in the kitchen. A world that becomes, more or less indirectly, an important space for everyone because one eats each day and the “independence” of an individual begins in being able to prepare a meal to be able to feed yourself. Tasting the pasta was a sort of initiation and has been one of the most important lessons.

“You mustn’t be distracted. You have to follow the cooking because even a minute longer can be enough to overcook pasta” said my mother “if pasta is overcooked it will taste like glue and even the best seasoning will not give flavor to the dish.”

Al dente is the term for the perfect pasta cooking and is also the word that my mother often said to make sure I did not forget this first basic rule.

But even before the cooking is the choice of pasta to make a difference. In Italy, there is are many shapes, sizes and brands. There are national brands and those products within each Italian region. The quality is top-notch but there is always one brand better than another. The quality of grain (in Italy, pasta is only made with durum wheat) and water are the two most important factors by which one has to judge the excellence of pasta. Sometimes, it is difficult even for Italians to choose between the shelves of supermarkets offering dozens and dozens of types of pasta. My mother has always had very clear ideas on her favorites and I was educated to choose with critical eyes. Even as a child I was used to eating organic durum wheat pasta, whole wheat pasta, Kamut and Farro pasta. As an adult, I also discovered corn, rice and buckwheat pasta, naturally gluten-free, which I appreciate for its high digestibility. I often propose gluten free pasta in my summer recipes for a light, easily dishes.

Pasta is the best known symbol of Italian cuisine. Abroad, it is customary to believe that fresh pasta is the most consumed product by Italians. In truth, it is not so. The typical and the most consumed, for excellence, is the dry pasta (according to the latest statistics, 99% of Italians consume pasta. Every Italian eats, on average, 28 KG-pounds- of pasta per year). Rigorously prepared with durum wheat, dried pasta, cooked al dente, and combined with not too elaborate sauces is one of the signature dishes of the Mediterranean Diet (UNESCO Intangible Heritage), a dish that Italians consume daily. The common belief of foreigners, is that pasta (like pizza) makes you fat. However, many Italians eat a plate of pasta once a day and are among the longest-lived people in the world (along with the Japanese) and are some of the less obese in the world. The pasta’s condiments of the Mediterranean Diet are also fresh and seasonal, proving to be a healthy and simply option for a meal. 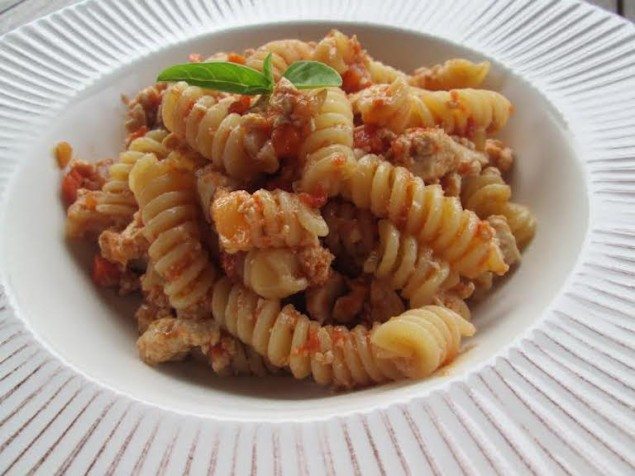 A SHAPE FOR EACH SAUCE
The most common types of dried pasta in the world are “rigatoni”, “penne”, “fusilli” and “spaghetti” but in Italy there are endless amounts of forms of dry pasta Below is a list of the most common shapes with which you can create as many tasty recipes.

SHORT PASTAS (Pasta corta)
Anelletti: “small rings” are often used for soup or, especially in Sicily, for oven baked pasta.
Calamarata: these “rings” are perfect for every kind of sauce.
Conchiglie: “shells pasta” are excellent with sauce, vegetables and cheese.
Cellentani: small tubed pasta shape, ideal for sauces or bake.
Ditali (or ditalini): these short tube of pasta can be served with soup or legumes.
Farfalle: known also as “bow tie pasta”, they are used for salads but they are also great with sauce such as simple tomato.
Fusilli: the sauce fits perfectly in the spiral of these delicious pasta.
Malloreddus: or “Sardinian gnocchi”, are the traditional pasta of Sardinia Island. The name, “Malloreddu”, which means “bull” in Southern Sardinia (so the plural, “malloreddus”, means “calves”) comes from the shape and texture of dense pasta made with durum wheat semolina.
Paccheri: they are a big size pasta perfect for strong sauces, such as ragu.
Penne: smooth (“lisce”) or ridged (“rigate”), penne absorb more sauce and can be used also with salad.
Radiatori:“Radiators” are perfect for salads and for vegetable sauces.
Rigatoni: Rigatoni are ridged tubes of pasta, perfect for every sauce.
Ruote: “Wagon wheels” are ideal for salads.
Sedanini: “Little celery stalks” are perfect for all tomato sauces.

LONG PASTAS (pasta lunga)
Bucatini: their names means “buco”, hole, and has a particular function. The hole allows pasta to cook perfectly. Water enters as the pasta boils and reduce the cooking time.
Busiati trapanesi: Sicilian pasta shape with trapanese pesto.
Linguine: “Little tongues” are generally used with seafood and tomato sauce.
Reginette:“Little queen” also known as “Mafaldine” (Little Mafalda), they were created to celebrate the birth of Princess Mafalda di Savoia, born in 1902 to Vittorio Emanuele III, the last King of Italy.
Spaghetti: the most famous type of pasta is perfect for every kind of sauce.

THE ORIGINS OF DRIED PASTA: A SHORT INTRO

Arabs introduced the use of dried pasta to Western Sicily, although pasta had been eaten since the Greeks and Romans under the name of “Lagana”, similar to the current lasagna.

Over the centuries, Sicily and Liguria regions have given rise to the spread of dried pasta in Italy. Both Sicilians and Ligurians moved to sea and had the need for supplies that lasted a long time, occupied little space and had a high energy input. The drying process in these regions has been favored by a perfect Mediterranean climate. At that time, pasta was made with semolina flour. The producer sat down on a bench and used his feet to mix and knead the dough. Naples was one of the cities that first imported pasta from Sicily and it also was the city that, in 1600, marked a turning point for the production of dried pasta (in Italian: “Pasta secca”) as a typical product of Italian culture.

In Naples, pasta was lying in the reeds exposed to sunlight or fresh air. Soon, Gragnano, a small town near Naples, became famous, first in Italy and then all over the world, for its high quality pasta, thanks to perfect weather (sun, wind and the right humidity). In the past, the main streets of this small city were designed specifically to be best used for the natural drying of pasta, with special exposure to the sun. Gragnano pasta (nowadays exported all over the world and sold in supermarkets and shops of the best Italian food) is obtained by grinding the wheat grown in specially demarcated areas and reduce it to flour. Flour is mixed with water from the springs of the valley and made her lie down on wooden frames. Then, the dough is cut with a knife from the “cutters”, according to the desired size and dried with advanced machinery.

Until the end of the eighteenth century, pasta was consumed without any seasoning or only with cheese. With the discovery of Americas, tomatoes (that in the Mediterranean Countries found soon fertile soil) slowly were used as a sauce for pasta. The first tomato sauce (with salt and basil), was invented in Southern Italy to flavor “macaroni”.

Today, the industry of pasta is one of the leading sectors of Made in Italy products with an ever expanding International market. It is considered a complete food, with a low calorie intake, since it is composed of highly digestible carbohydrates and a good source of iron and B vitamins.

In Italy, dried pasta is only made with durum wheat, while other Countries allowed the use of wheat. The Italian durum wheat holds, in fact, optimal cooking. Italy is a precious puzzle of gourmet foods where each type of pasta and sauces represents different traditions of each city. 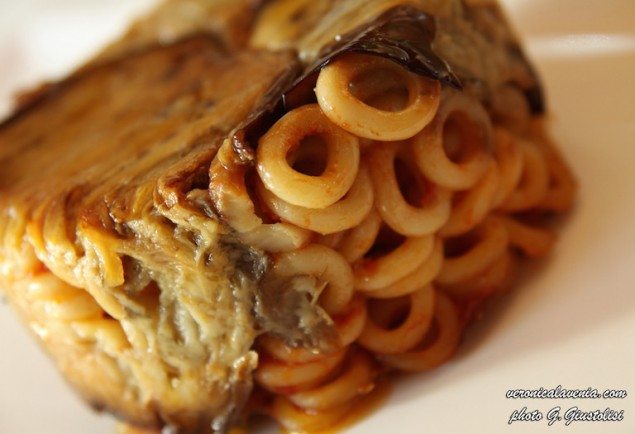 TOMATO: a good quality of tomato makes special a simple salad or a pasta recipe. In Italy, there are many tomatoes varieties for salads and sauces. The most famous for sauces are “San Marzano” and “Cherry tomatoes” from Pachino. “San Marzano” has an elongated shape, the firm flesh, few seeds, little water and, for this, is used to prepare sauces and tomato puree. The variety produced in Naples and all Campania Region has the EU DOP label (Protected Designation of Origin). “Cherry tomato”, for its small size, is ideal for quick sauces and cold pasta salads. It is produced in Sicily (EU Label DOP) and is a variety of the well-known and valuable “Pachino tomato”, so named from the Sicilian town where it is grown.

CHEESES: In Italy, there are over 400 varieties of cheeses, many of which have the European label DOP. Here a short list of only best-known cheeses (available in the best supermarket all over the world):
Fontina: PDO cheese, produced exclusively in the Valle d’Aosta (Northen Italy) from cow’s milk cooked. It has a delicate but intense flavor and is suitable for fondue.
Gorgonzola: The town of Gorgonzola in Lombardy (North of Italy) is famous for its ancient cheese. Gorgonzola is produced both in Lombardy and Piedmont regions. Milan, Como, Pavia and Novara are the main production area of Gorgonzola. Gorgonzola is one of the most exported Italian cheese. It is a soft cheese with greenish streaks deriving from a process called “erborinatura”, that is the creation of molds. It is slightly spicy and its typical taste is very difficult to imitate.
Grana Padano: PDO hard cheese with a grany texture, similar to ParmigianoReggiano, is produced in the North of Italy.
ParmigianoReggiano: It is a PDO hard cheese, which can be aged 1 to 3 years. Parmigiano Reggiano must be produced using a specific recipe and production method within the provinces of Parma, Reggio-Emilia, Modena, and specific regions in the provinces of Bologna and Mantua. “Parmesan” is not the English translation of the word Parmigiano-Reggiano but it is an imitation of Parmigiano Reggiano, without PDO.
Pecorino: the name “sheep” only indicates the origin of the milk. The best known is “Pecorino romano” PDO cheese, produced in Lazio and Sardinia, famous for its spicy aroma. Other varieties are “Sicilian” and “Tuscan” Pecorino.
Ricotta: it is not considered a cheese as it gets from the whey and not from the milk. Its name means “twice-cooked” and it has a sweet and delicate flavor. “Ricotta salata”, or seasoned, is a variety of ricotta cheese produced and appreciated in particular in Sicily and is different from fresh ricotta because it has a more pronounced salty flavor and texture. Perfect to be grated as a condiment for pasta.
Robiola: Soft cheese produced in various parts of Italy in different variations.
Taleggio: It is a soft cheese, slightly stringy, buttery flavor and is produced in Lombardy (Northern Italy). 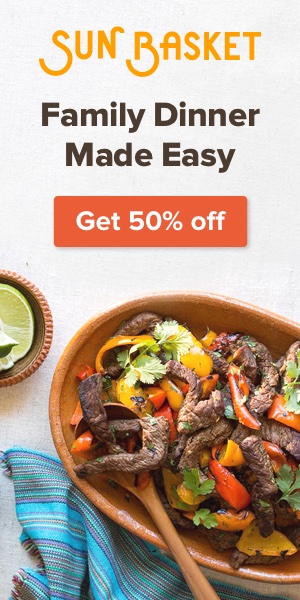