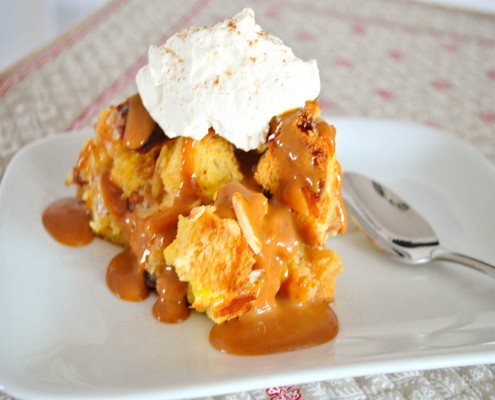 Stephanie Russell is a personal chef and author of the…

For me, panettone elicits fond memories of family and joy. Come holiday time, we would gather around the table after dinner to enjoy a slice (or two) of buttered panettone along with a cup of either hot tea or hot chocolate. It was a standing tradition I shared with my parents, grandparents, and sister and one I was eager to continue with my own family.

Last year when balsam wreaths, mulled wine, and perfectly-studded boxes of panettone signaled the arrival of Christmas season I started toying with the idea of baking the iconic Italian sweetbread from scratch. The journey to making homemade panettone was not easy; I’ll be honest. It took three batches — each batch producing three decent-sized panettone loaves — until I was satisfied with how they turned out. When the (flour) dust settled, I had sitting before me nine loaves of panettone and not a one clue of what to do with them all.

After the nostalgia of eating a slice with my evening tea wore off — and it did, after the sixth day — I began to ponder an alternate way to use the panettone. Drawing back from my family, I remembered a recipe for bread pudding my grandpa would make whenever we had leftover slices of regular white sandwich bread. By tweaking a few things and adding some surprise ingredients to the bread pudding I was able to use up the last remaining loaves of panettone and make a delicious variation on the sticky sweet dessert.

This recipe for panettone bread pudding is fairly simple and straight-forward but requires some planning ahead of time. Most bread puddings benefit from sitting in the fridge overnight to give the bread a chance to soak in all that yummy spiced custard (the same is true for french toast) and this recipe calls for just that. Prepared this way, it was super easy to pull out and bake first thing in the morning for a warm breakfast treat. Also, this bread pudding is no soloist — he works in concerto with a menagerie of performers — notably, the dulce de leche* sauce and homemade whipped cream, both of which can be made the day before with no consequence.

*Dulce de leche is sweetened condensed milk that has been gently cooked down to create a rich, golden caramel, often used in South American desserts. You can find prepared canned dulce de leche in most international food aisles at major supermarkets or at your local Latin American market. Alternatively, you can make dulce de leche from scratch.

Stephanie Russell is a personal chef and author of the food blog okie dokie artichokie. She is an advocate for all things gorgeous, sexy, and delicious -- the naughtier the better. Her vices include cold butter, sardines, cheap wine, and old mix tapes. She currently resides in Ann Arbor, Michigan.

3 Ways to Use Leftover Pizza