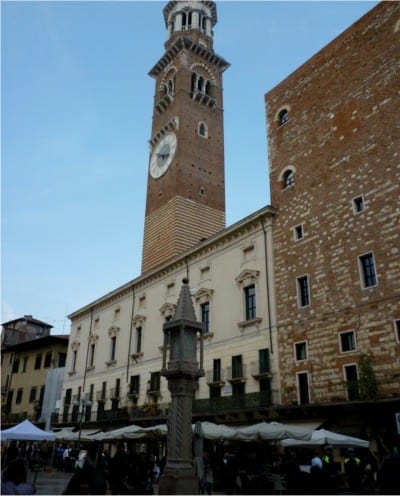 Kathy Becthel takes us on a culinary trip through the second largest city in the Veneto region, Verona.
By Kathy Bechtel

Verona is one of the most beautiful cities in the Veneto, the second largest city in the region and the third in northeast Italy.  Often overlooked beside neighboring Venice, it possesses an impressive artistic heritage and many cultural diversions. Verona hosts several annual fairs, shows, and operas, such as the renowned lyrical season in the Arena, the ancient amphitheater built by the Romans. It also boasts an enviable location, right in the heart of the Valpolicella wine zone, so we stop here on many of our Bike the Wine Roads tours. 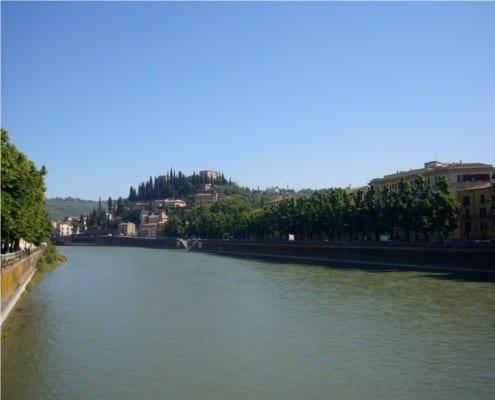 The precise details of Verona’s early history remain a mystery. The city always played a crucial role in the history of the region, due to its strategic location at the intersection of several roads, and like many areas in Italy, saw many different rulers over the years. From a Roman colony, to being ruled by the Goths, Lombards, a free state under the Scaligari family, to Emperor Maximillian, Milan, and finally ending up as part of the Venetian republic, who began building fortifications to make Verona their primary stronghold on the mainland. During this last relatively peaceful period, the city was beautified by a great number of churches and palaces.

Later history saw Verona become part of the Austrian empire, and Napoleon’s Kingdom of Italy. It finally became part of Italy in 1866, during the Risorgimento that unified the many regions into the country we recognize today.

During World War II, Verona was part of Mussolini’s Republic of Salo, and was the most bombed city in the region, suffering heavy damage. Today, the city still enjoys its strategic location at the intersection of north-south and east-west transportation pathways, and is a major industrial and agricultural center. Manufacturers of paper, textile and metal products, as well as agriculture and wine making are important industries in the region.

Verona has been named a UNESCO World Heritage Site, due to the importance and value of its many historical edifices. Visitors to the city can visit the Arena, the third largest Roman amphitheater in Italy, located in the Piazza Bra. While only a small portion of the original outer perimeter wall remains, the interior is virtually intact, and is still used today for fairs, theater and the famous summer opera series.

Piazza delle Erbe was the sight of the forum during the Roman Empire. Surrounded by Torre dei Lamberti, the ancient town hall, the Judges Hall, Casa dei Giudici, and various Palazzos. A white marble column in the Piazza itself holds St. Marks’ Lion, the symbol of the Republic of Venice.

A variety of other Roman monuments are found throughout the town – the Roman theater, the Ponte di Pietra (Stone Wall Bridge) and the Arco dei Gavi (Gavi Arch), both dating from the 1st century AD. Also standing are several of the original Roman city gates, Porta Leoni and Porta Borsari. Numerous beautiful churches, basilicas, the Duomo, the Museum at Castelvecchio, so many wonderful sights make Verona well worth a visit!

Of course, a city the size of Verona has many options for dining. Both Piazza Bra and Piazza della Erba are lined with various eating establishments that offer outside seating during the warmer months – wonderful for soaking up the street scene as you dine. Many of these offer the typical menu turistico, which is usually a wide range of options designed to appeal to all. I prefer to dine at places that offer a more traditional regional dining experience.

Off the beaten path you will find Trattoria all’Isolo, featuring local Veronese cuisine. I enjoyed a Sunday lunch there recently, with fettuccine with black truffles as my primi – fresh noodles, and wonderfully prepared. I followed this with a classic Veronese dish, Bollita Mista with Peara sauce. This was several pieces of various meats, boiled and served with a peara sauce, a ‘peppered’ sauce thickened with polenta. A place popular with locales, and for those interested in an authentic Veronese meal.

For those that enjoy sampling the local cured meats, the place to visit is Trattoria al Pompiere. A reservation is suggested, as it is quite popular. They offer a wonderful selection of local meats and cheese, with tasty jams and sauces to accompany. Excellent wines and grappas. It is very centrally located, just off of Piazza della Erbe, very near Juliet’s Balcony.

Another Slow Foods recommendation is Trattoria Al Bersagliere. A bit out of the way, near the Castelvecchio, it has a magnificent selection of wines to accompany its traditional menu. Featuring dishes such as red wine risotto and bigoli with duck ragu, the pricing here is very reasonable. Another spot recognized for its traditional Veronese cuisine.

If you are looking for a place to enjoy a glass of the local wines, stop by Antica Bottega del Vino and choose a wine from the selection on the chalk board. Food is available as well, from small snacks to dinners.

Verona is located right in the heart of the Valpolicella wine zone. Vineyards surround the city on all sides, so finding a nice local wine to enjoy is easy – the problem is deciding which ones. White wine lovers should try out the Soave wines; this DOC region is just to the east, producing marvelous whites from the native Garganega grape. These are very refreshing, crisp, dry whites that range from floral to mineral, depending upon the terroir. Sweet versions are made as well, called Recioto di Soave wines, referring to the drying process employed to sweeten the grapes. Producers of note here include Pieropan, Coffele, Ca’ Rugate.

Aficionados of red wines have a wide selection to choose from, all made from a blend of local grapes, including Corvina, Rondinella, Molinara and Negrara. The range of wines that are made with these same grapes is astonishing. Starting on the lighter side would be a Valpolicella, with it’s distinctive tart cherry palate, is a great all occasion wine. The additional designation “Classico” on your bottle indicates that the grapes were grown on the original vineyards of this zone, and not from fields that were included at a later date, and these are usually a bit higher in quality. If you prefer something a bit more robust, the Superiore designation signifies that the wine has been aged at least 12 months. And of course, a Classico Superiore indicates both.

Something with even more heft would be a Ripasso wine, this term is evidence of the use of the ripasso process in the production of these particular Valpolicellas. For a Valpolicella Ripasso, the pressed grape juice is combined with the leftover grape skins and seeds from the production of Amarone wines, and allowed to macerate for an extended period of time. These Ripasso wines are fuller-bodied and have a higher alcohol content.

Finally, the BIG red of the region is the renowned Amarone. Treat yourself here; these go for $60 and up back in the US. These wines are produced from grapes that have been dried for three to four months after harvesting, producing a raisin with a high concentration of sugar. Using special strains of yeast, the sweet juice from these raisins is fermented, completely converting the sugars into alcohol. The wine is then aged in wood barriques for several years. The result is full-bodied and rich, with hints of port wine, dark chocolate, and coffee, with a slightly bitter (amara, in Italian, the source of the name) finish.