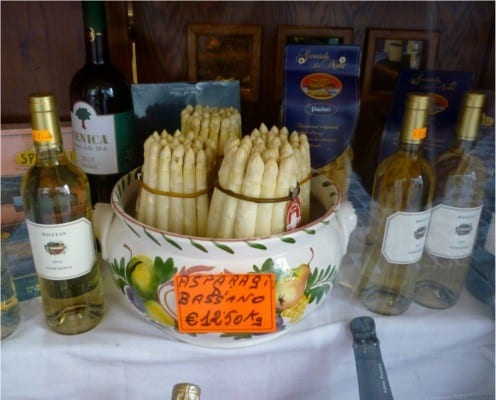 Kathy Bechtel takes another bike trip around the home of Italy’s most famous digestif.
By Kathy Bechtel

Bassano del Grappa is a beautiful town we visit often on our cycling tours, with wonderful Palladian architecture, a special place in the local history, and unique foods and wines. Located in the province of Vicenza in the Veneto region, the city lies at the foothills of the Prealps, where Brenta river emerges from the southern end of the Brenta valley (Canale di Brenta) and begins its traverse of the lowlands past Vicenza and Padua on its journey to the Adriatic.

In the culinary and spirit world, Bassano is probably most famous for the renowned Italian digestif, grappa, made from distilling the remains from the winemaking process after pressing: grape skins, seeds and stems, called pomace. It is commonly believed that the spirit was named after the town, but the town itself was not called Bassano del Grappa until 1928 (prior to that it was called Bassano Veneto), long after the spirit was invented.

Bassano was located right on the front line in both World Wars. During the first World War, terrible battles ensued on neighboring Monte Grappa, where the Italian army regrouped after their devastating loss at Caporetto and made a heroic last stand against the Austrians. At the top of the mountain lie the remains of over 12,000 Italian troops and over 10,000 Austrian and Hungarian troops who lost their lives during this battle. In 1928, the name was changed to Bassano del Grappa, in memory of the soldiers killed. Hemingway fans may recall the role this town played in his novel A Farewell to Arms.

In World War II, after the Armistice, the city was invaded by German troops, who killed or deported numerous inhabitants. Memorials to these fallen heroes line a row of trees just outside the old town center. The most famous symbol of the town is the beautiful covered pontoon bridge, designed by famed architect Andrea Palladio in 1569. This bridge has been destroyed many times, most recently during World War II. The Alpine soldiers raised money and paid for the rebuilding of the bridge, known as the Ponte degli Alpini.

For us biking foodies, grappa is not the only reason to visit Bassano. Renowned for one of the rarest delicacies in Italy, the white asparagus of Bassano which has earned its own EU DOP quality designation, appears between mid-March and mid-June. The oldest legend attributes its introduction to the area by Saint Anthony of Padua, who was very fond of the vegetable and spread knowledge of it to Bassano. Here, it found its ideal environment in the sandy, soft, well-drained and calcareous soil along the Brenta River. In the 1500 and 1600s, the white asparagus of Bassano was prized, and reserved for the banquets of the Venetian nobility.

On a recent private bike trip, we were able to enjoy the real thing throughout the week, and made a wonderful, simple roasted white asparagus in one of our cooking classes. Later in the week, I found a way to take a little taste of this delicacy home with me; a family producer in Bassano that makes their own canned sauces and pestos called “Specialita in Gamba, Produzione propria e spaccio di conserve aglio e peperoncino”, Production and sale of canned garlic and chili.

This beautiful shop is right in the center of Bassano, with Mom and Dad preparing the sauces, and the son greeting and offering me many tastes of their wonderful products. I returned later with our trip guests, and more sampling. They had many tasty sauces; their most popular being AOP (Aglio, Olio e Peperoncino – garlic, oil, and hot peppers), but also a radicchio, a garlic pesto, a horseradish sauce (cren), a sauce for bigoli (which I can’t now recall exactly what it contained) and a white asparagus ‘pesto’ which made its way back to the US in my suitcase. They also pickle and preserve whole garlic, shallots, and mixed vegetables. Their products are very attractively displayed on wooden shelves, with strings of dried peppers hanging along the ceiling, and large baskets of garlic and shallots around the store. A leg of prosciutto is on a carving rack, its only purpose to accompany their sauces during tastings. Well worth a stop, and I will be experimenting with my own version of AOP  back home.

For dinner, there are many choices to be had here. I enjoyed a nice, simple dinner one evening here at Osteria La Caneva, right around the corner from Piazza Liberta. A very local establishment, with only about 6-7 tables, and the menu written on a chalk board.  I began with a local specialty, the soup pasta fagoli, which was much better than many versions I’ve had at much more upscale locales;  even the presentation was more elegant. A primarily pureed bean soup, with a few whole ones remaining, and some short fettuccine noodles. It was topped with toasted croutons and an EVOO drizzle. It had great flavor, and a bit of smokiness from pancetta.

My entree was fettuccine with funghi and morlacco, a soft cheese produced right here, at the foot of Monte Grappa, and again this was very good. The pasta was well done, and plenty of fresh local chiodini mushrooms that were in season during the time of my visit. My only comment was that the morlacco sauce was a bit too rich for me, so could only eat about a third. A glass of a local blend of Cabernet Sauvignon and Malbec was a good pairing to cut through the rich sauce.

I had no room for dessert at this point, but saw several patrons being served a panettone for dessert by the chef, prepped at their table with lots of powdered sugar.

Another restaurant that serves the traditional local foods is Antico Ristorante Cardellino on Via Bellavitis. Featuring “La Cucina della Memoria” – cuisine from times past – they use local ingredients including radicchio, white asparagus, asiago cheese and mushrooms in their classic regional dishes. Enjoy the house specialty, baccala vicentina, or bigoli con anatra or risotto con radicchio.

Another small local osteria is Al Caneseo – da Amedeo on via Vendramini. I recently enjoyed fettuccine with white asparagus here as my first course, a real treat during the short growing season of the local delicacy. My second course was not as special. Lamb chops were overdone, primarily due to their very thin cut. This is traditional, but just not the way I enjoy them.

What wines should you try on a visit to Bassano del Grappa? The Montello e Colli Asolani DOC, the Vicenza DOC and the Breganze DOC are all right nearby, each with some wonderful wines to sample. A perfect aperitif to have with your antipasti would be a Colli Asolani Prosecco from Bele Casel or Villa di Maser.  A white wine to try would based on the local Garganega grape, a nice one is made by Contra Soarda, their Il Pendio which is a blend of Garganega and Vespaiolo. For red wine fans, the Il Saggio from Contra Soarda is a very intense, medium bodied wine, a blend of Carmenere, Grupello and Marzemino. Bordeaux blends from the Venegazzu vineyards of Montello, such as those made by Gasparini, are also worth a try. Finally, the well-known Breganze  winery Maculan has its Brentino, another Bordeaux style blend, as well as some tasty sweet dessert wines such as the Dindarello and Torcolato.

And, of course, no visit to Bassano is complete without a tasting of the local digestif, grappa. The only distilled spirit produced from the grape pomace, there are two famous producers located in Bassano, right on or near the Ponte degli Alpini. Nardini is on the bridge itself, and you will often see the locals gathered inside and spilling out onto the bridge enjoying a drink. Across the street is the producer Poli, where you can taste a few varieties of grappa after you visit their grappa museum to learn how the spirit is made. You can also ‘smell’ many of their varieties – they have about two dozen or so stations that deliver a whiff of various flavors at the push of a button. A good way to experience the flavors without the alcohol!