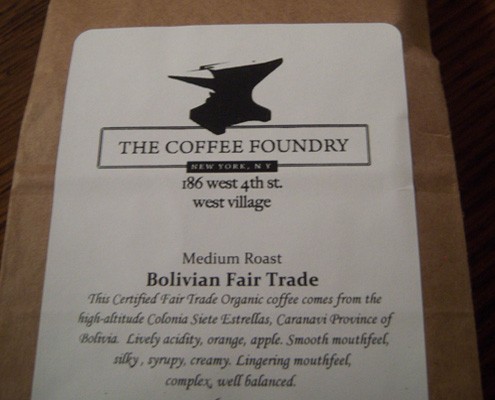 Bill Walsh explores a bag of Bolivian Fair Trade Coffee from the West Village in NYC that scores pretty well in the coffee and tea index.
By Bill Walsh

Local businesses working together makes a whole heap of sense. Take NYC clothing company 3sixteen that put together a video series about what people who wear their clothing are passionate about. The videos document tattoo studio Invisible NYC and the drummer of the Death Set, but the one that caught my eye was the one about the Coffee Foundry, a local coffeehouse and roaster in NYC’s West Village.

Long story short, the video enticed my curiosity and the Coffee Foundry (in cooperation with 3sixteen) sent me out some of their Bolivian Fair Trade to take for an objective spin. I received a medium roasted coffee in the classic brown bag which I prepared in three different infusions: drip (filtered), french press and siphon. All three infusions produced light-to-medium bodied brews with mellifluous results.

The french press brought out more notes similar to rum and oatmeal but still produced popcorn, raisin and fig along with a little tingle of dandelion green.

The siphon dealt out a cup similar to the drip, with a noticeable wheat presence followed by a little cream, honey, cooking cocoa, nuttiness, croissant and a bit of cinnamon.

While I wouldn’t say Coffee Foundry’s Bolivian was one of the best I’ve had, I will say that it produced a good cup of joe. If you’re in the market for good south american coffee, grab a bag from the Coffee Foundry.

Note: coffee was provided free of charge and the above review is objective feedback.