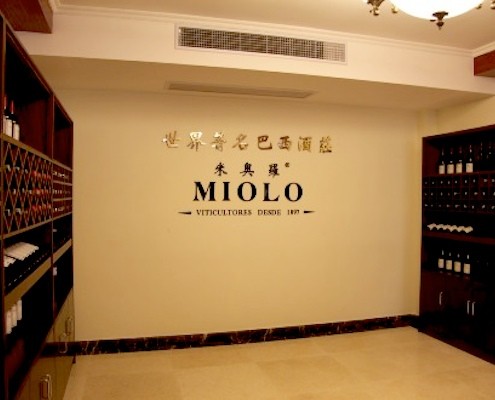 Miolo is the first Brazilian wine producer to open its doors in China.
By Suzie Castello

Partnering with local importer Ningbo Ke Peng, the Miolo store  in Shanghai features some of Miolo’s more sophisticated labels such as Lote 43, Quinta do Seival Castas Portuguesas and Merlot Terroir. Miolo’s Manager of International Relations, Morgana Miolo said of the store’s opening, “The great advantage of having a Miolo store in Shanghai is the visibility we will have and the opportunity that gives the Chinese consumer to find the Miolo labels, and know them better, in one exclusive place.”

“Brazilian wines are a new thing in China,” says importer Jannie Jian, “but those who try them end up preferring them.”  Miolo has been in the Chinese market for just over a year,  already selling over 40,000 bottles, positioning itself to take advantage of a potentially enormous market.  Although the average Chinese consumer currently buys only about a liter of wine a year, according to Vinexpo, China is expected to be the sixth largest wine market by 2014.