To say we were beyond excited to bring this over to Honest Cooking would be an understatement. Care of the team at Canteen, this Middle Eastern themed granola with pomegranate pears is arguably (but justifiably) the best granola you’ll ever eat. Seriously. It’s that good. And what makes it THAT good? It comes does to three things…
By Pepper Passport 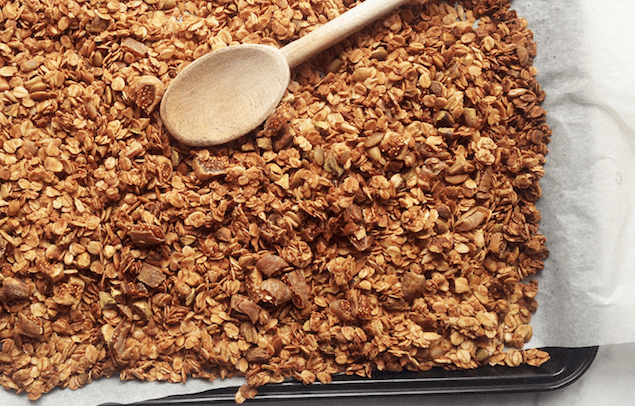 1. Goodness: It’s packed with it, from the oats to the nuts, it’s all rather nutritional* and a solid combination of proteins and carbohydrates to get the day going right.

2. Sweet Tang: There’s a wicked tang at play from the pears, figs and the sheep milk yoghurt. It combines with the cinnamon and  carries through some seriously superb flavours. It’s a little transportive – if you try really hard you might picture yourself sitting in a courtyard in the Lebanon of old – ignoring that if you were in Damascus, you wouldn’t be having granola. But, you get where we’re going with this.

3. Pomegranate: The pomegranate presence does two things; it poaches the pears ridiculously well, and when that’s done, it reduces down into a gorgeous tart syrup to drizzle over the dish.

Print
This Middle Eastern granola with pomegranate poached pairs is addictive. So print out this recipe. Go to the kitchen. Then double the amount you make. High supply levels are very much recommended. So too is hiding your stockpile in the pantry from others.
Author: Pepper Passport
Recipe Type: Breakfast
Serves: 14
Ingredients
Instructions
3.2.1275