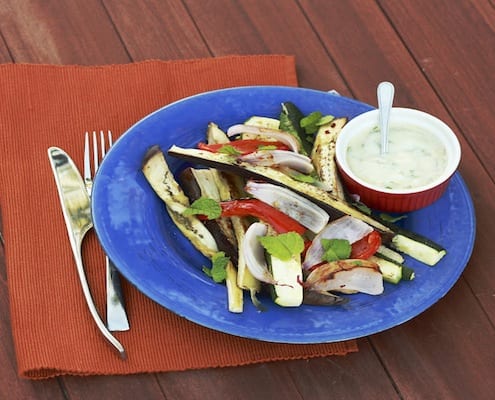 On our first date, the waitress had to come to the table at least three times before Ryan and I were ready to order. It wasn’t menu indecisiveness; rather, we were too busy chatting away (read: me, grilling him with questions) to even look at the menu. When we finally ordered, Ryan selected the eggplant parmesan and thus was my first introduction to the funny-looking vegetable.

I don’t cook with eggplant all that often, which is surprising because after discovering it, I found that I really enjoy it. I know it’s kind of a ‘love it or hate it’ vegetable for many, and I can understand why. Incorrectly cooked, it can be bitter or mushy or flavorless. Not so in this roasted vegetable salad, found in Redbook’s October issue.

This was a post-vacation detox meal when we were craving something that wasn’t cheese or bread! I’m already craving this again. The vegetables are tossed with salt, pepper, and red pepper flakes. The simplicity of the seasoning lets the fresh flavors from the veggies shine, and the mint yogurt sauce is the perfect cooling mechanism to counter the red pepper flakes! The recipe calls for topping the salad with toasted pine nuts, which I accidentally forgot to include. We didn’t miss them but they’d be a great addition.

0
Natalie McLaury December 3, 2012
No Comments Yet