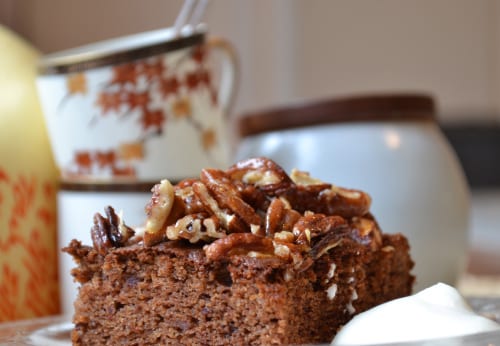 Helena is a huge foodie making the most of the…

The pecan nut topping became slightly caramelized in the oven under its maple syrup coating, and added great crunch to the cake in contrast to the soft sponge.
By Helena Berthon 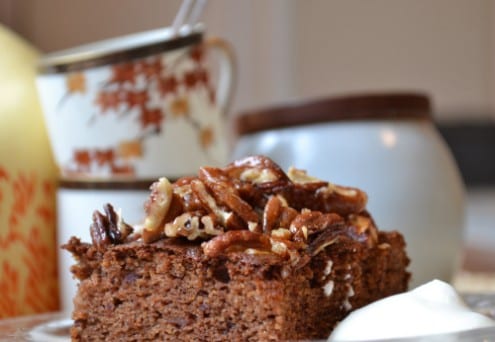 This cake is loosely based on one from the petite kitchen blog. I’m not going to say that it’s the best cake I’ve ever eaten, but the simple joy of cake after a few weeks of self-restriction was enough to give it serious brownie points. The dark sponge was bouncy, light, and redolent of a homely gingerbread. The dates added sweetness, but no overwhelming date flavour, the ground almonds lingered fragrantly adding depth and structure, but the real punch came from the cinnamon and ginger – warming and autumnal (even if it is nearly spring). The pecan nut topping became slightly caramelised in the oven under its maple syrup coating, and added great crunch to the cake in contrast to the soft sponge. Served with crème fraîche (almost like icing…) and an extra drizzle of maple syrup, it was a highly successful, saintly pudding.

Helena is a huge foodie making the most of the explosive gastronomic scene in London, England. She has had her own food blog, http://hellyfillsherbelly.com, for almost two years in which she combines recipes and food styling, with witty and engaging stories. At the moment, she's working all hours in the world of food television, which although hard work, is the perfect opportunity to taste some top notch food. She loves eating, restaurants and cooking, and can't imagine a life that doesn't revolve around food.