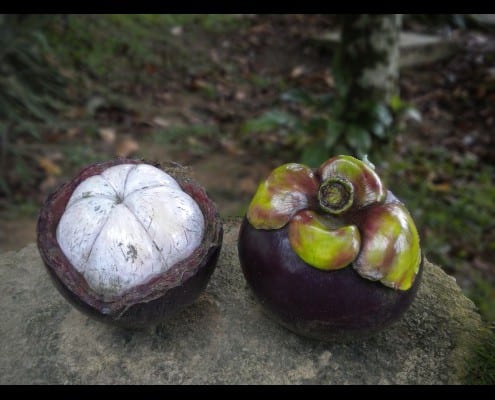 Despite its deceptive name, the mangosteen has no connection to the mango – except that it is also sweet and delicious.
By Marissa Sertich

Throughout Singapore, I’ve been trolling the markets like a pastry chef of the prowl.  Surrounded by a world of new ingredient possibilities, my basket quickly fills with palm sugar, sago pearls, longan and other ingredients that I hope to transform into ice creams, tarts and custards.  While Singapore is known for its curries, chicken-rice and other savory dishes, I pass up the fish head and belachan for something a little sweeter.  My latest discovery is the mangosteen.

You may have heard of the mangosteen during its short-lived cameo in the western world as a fix-all, antioxidant-packed miracle juice.  A Utah-based company made so many claims about the mangosteen that the FDA issued them a warning letter.  Throughout Southeast Asia the rind of the mangosteen has been used in hundreds of folk remedies for everything from eczema to inflammations – But I am not here to tell you about the health benefits of some miracle fruit.  I am here in the pursuit of deliciousness.

While durian is considered the King of Fruit, the mangosteen is his queen.  Not only did Queen Victoria claim the mangosteen as her favorite fruit, but its petite, purple stature perfectly contrasts the durian’s knobbed, prehistoric features.  And while durian is known as an acquired taste, the mangosteen offers delicate sweetness and subtle undertones of acidity that appeal to a universal palate.

Tear through the mangosteen’s purple rind and you will find a sweet white pulp divided into six to eight bulbous segments, resembling something similar to garlic cloves.  Despite its deceptive name, the mangosteen has no connection to the mango – except that it is also sweet and delicious.

The mangosteen is a rare find in the western world.  Attempts to grow the tree outside of Southeast Asia have been almost completely unsuccessful.  Hawaii, Florida and California have all made several failed attempts.  The seedlings’ sensitivity to temperatures below 45 degrees and its need for high amounts of humidity and rain fall, make the mangosteen an ultra-tropical plant, unique to China, Cambodia, Malaysia, Thailand, Indonesia, Taiwan, the Philippines and Singapore.

The mangosteen’s exclusive availability is a large part of its appeal.  What would culinary travel look like if all of the same foods were available everywhere? It would be as bland as unsalted noodles and as ordinary as a banana.  Regional foods generate enthusiasm for learning about the unfamiliar.  Traveling is like entering a playground of new culinary toys and while I’m traveling I plan to take full advantage of the edible diversity all around me.