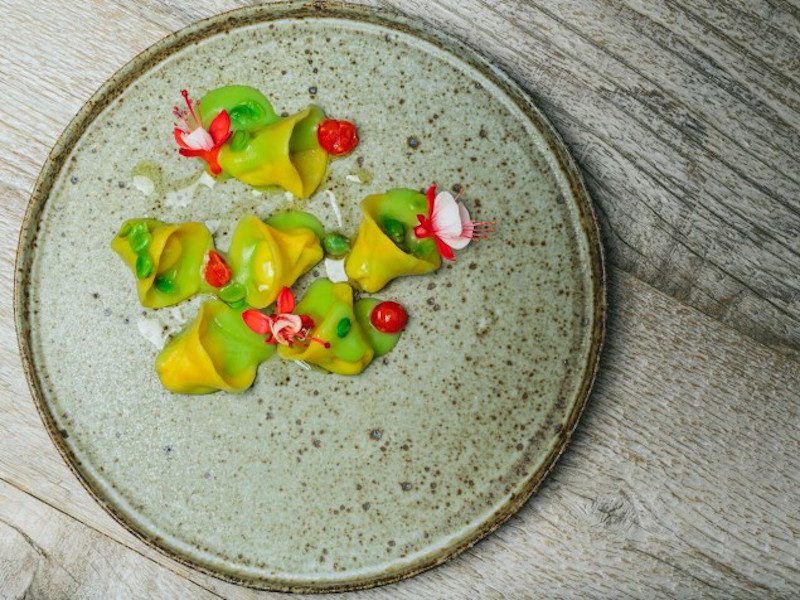 The Michelin-awarded La Bottega has reinvented classic Italian cuisine since May 2015 and helped put Geneva on the gastronomical world map. Now that co-founder Paolo Airaudo has left the restaurant to embark on new adventures, we caught up with sole owner Francesco Gasbarro to talk about his plans for the award-winning La Bottega. 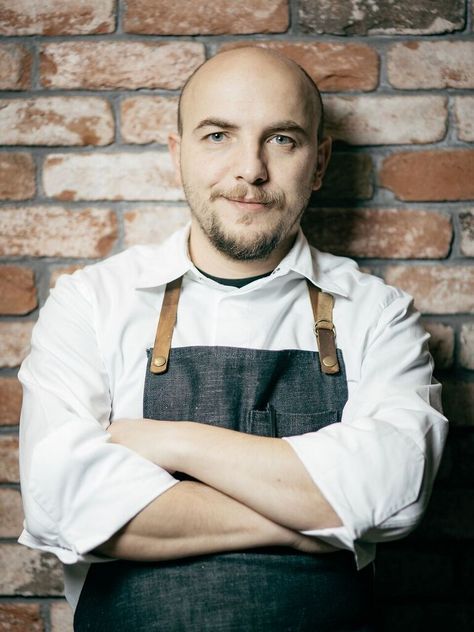 Very few restaurants can boast of having received a star in the coveted Michelin guide only 5 months after opening their doors for the first time, but La Bottega in Geneva is one of them. Earlier this year we sat down with Paolo and Francesco to talk about their success and their future.

Now it’s Italian-born Francesco Gasbarro who singlehandedly steering the direction of the restaurant from now on. Curious on where this fan- favourite, Italian fine-dining restaurant will set its course, we decided to get in touch with Francesco and chat about what to expect in the future.

Francesco is a food lover by heart, who has always put the dining experience of his guests over the image of the restaurant and will continue to do so. Fans of La Bottega can rest assure, that the few changes made in the restaurant will only be fine adjustments to benefit the guests in the end.

“We are continuing what we have done from the beginning with just a few minor adjustments. Lately we’ve only done tasting menus which is an excellent way to do business, but our guests don’t always understand the philosophy behind this. To remain successful you have to adapt to your guests philosophy without compromising your business. We’ve done this by starting to offer a la carte menus for lunch and dinner, so that the guests have that choice as well”, says Francesco Gasbarro.

But the changes are subtle and sophisticated. The beautiful interior of La Bottega, which was created by the Italian company Sestini e Corti, remains as it is. Guest will continue to dine in the rustic room which consists of recycled materials made from brick, wood and iron, and original bricks from Tuscany to recreate the Tuscan atmosphere. In Francesco’s words, the changes will more resemble that of a Formula 1-car. 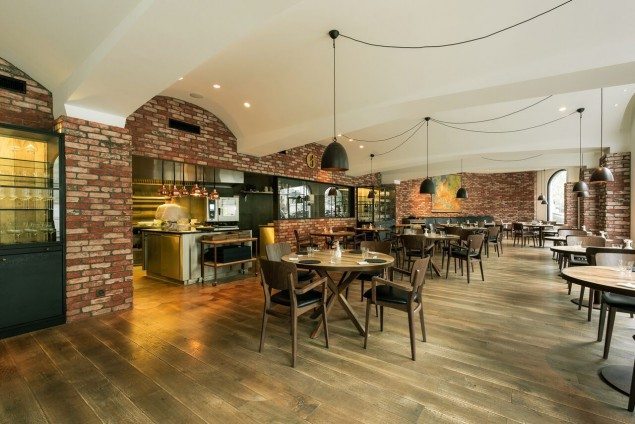 A cozy, homey feeling, with a rustic, Tuscan decor. Dining at La Bottega is like a bite of Italy, for both your sense of taste and your sight. Photo: Alex Teuscher

“For us simplicity equals perfection, so we’ve stayed simple. We’ve only changed the tires of the car to improve the results, meaning we’ve only changed mentally. Before we didn’t serve food on the terrace, because mentally we thought that guests had the preconceived notion that food served on a terrace doesn’t uphold the high standards of the food served inside. We’ve changed that, and guests are very thrilled.

They thank us both for the food and for the beautiful view from the terrace, which in my opinion is one of the best in Geneva. We only change to improve”, Francesco says and adds that the restaurant business is a dog eat dog world, where you have to be smart to understand the market.

But there is also good news for the Italian aficionados in town. Francesco makes slight changes to the menu, putting his Italian background more to use.

“Paolo and I had different backgrounds. His cooking style had a more international mindset, whereas I’m classic Italian. Before we had a predominately Italian kitchen with some international twists, and it’s basically going to remain the same with maybe a little more addition on the Italian side”.

La Bottega has always been acknowledged for being a Michelin awarded fine dining restaurant with a high gastronomic level, while still maintaining a casual and relaxed atmosphere with down to earth service. Exactly this is also what Francesco strives to offer his guests when they visit. It stems from his childhood when he first got the love for Italian cooking. The emotion of gathering the whole familiar in a cozy and comfortable environment, while feasting on classic Italian dishes, is where Francesco get’s his inspiration.

With a chef for a father and a grandmother who Francesco calls an amazing cook, Francesco learned his way around the kitchen from an early age, and was introduced to many different ingredients. These memories manifest into Francesco’s Italian free- style way of cooking.

“I have some childhood memories that stick so well. Like when my grandmother made polenta with meat sauce. The image of her cooking in a big pot and always stirring it with a big wooden spoon before pouring it directly on a wooden board. We poured the meat sauce on top and the whole family would eat directly from the table. These emotions are what I want to bring to La Bottega. I still remember the smell of the sauce like it was yesterday”, reminisces Francesco. For him fast food does not belong in the kitchen – the food has to be served with love – and that takes time.

Although Francesco is a hardcore Italian chef who loves the classics served by his grandmother, he is also a restaurateur who understands the restaurant industry. 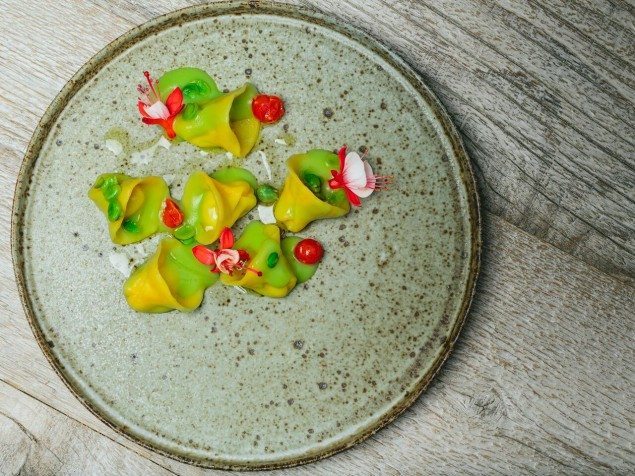 Serving well-prepared classic Italian food can easily be a recipe for success, but to achieve a status as one of Europe’s finest Italian restaurants, Francesco also believes you have to be innovative.

He describes his cooking style as simple Italian but well-defined. Every morning he goes to the local market to see what they offer and from here he starts thinking of new

ideas for dishes, using his many childhood memories and knowledge of ingredients to create something surprising yet recognizable.

“I try to redefine the classics at La Bottega. I don’t want to do something completely new that’s unrecognisable. For example we serve a “liquid pizza” at La Bottega. It consists of a shot of tomato juice dressed with extra virgin olive oil, dried oregano, fried bread crumbs, served with a cube of mozzarella. The guest then has to eat the mozzarella first and then drink the shot of tomato water. That’s how you keep it simple and classic while still being new and that’s how you get away with serving the most famous Italian dish in a Michelin-starred restaurant”.

The menu at La Bottega does have its classic moments and Francesco cites the Cappelletti di Piccione as the restaurant’s signature dish. What all the dishes have in common is the high quality of ingredients. Except for the oils and wines which he imports straight from Italy, Francesco uses local producers in Switzerland to get all the ingredients, adding a bite of Geneva to each serving of his Italian food. 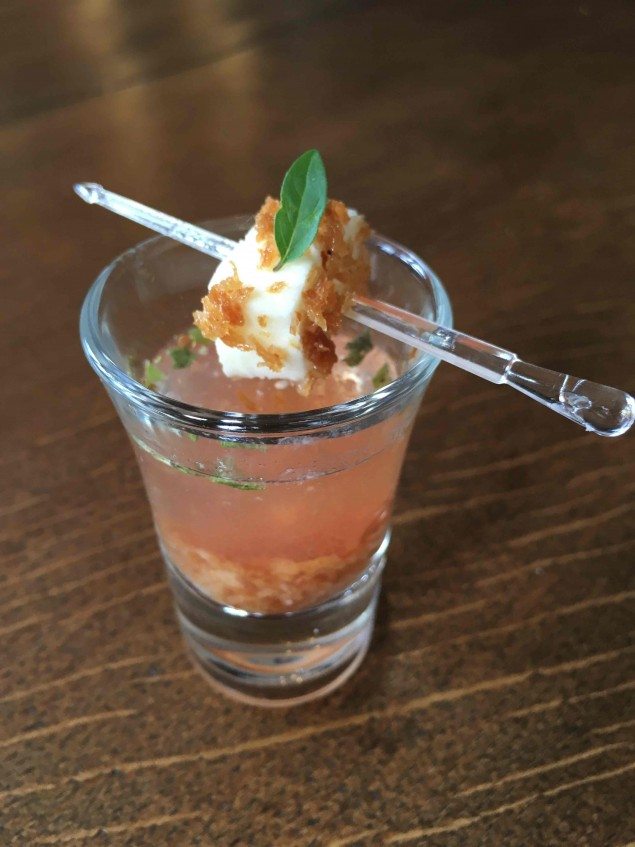 Redefining a classic! La Bottega’s take on the Margarita pizza, which is arguably the most well known pizza. Here it’s served as a liquid.  Photo: La Bottega.

The Swiss-style of cooking is still very new to Francesco who moved to Geneva in January 2015, to open a venture outside Italy. Although he likes the restaurant scene in Geneva and names Neptune, Cafe? de La Paix and Il Lago at the Four Seasons as other noteworthy restaurants, he still believes that Geneva has to mature before it can compete with the heavy hitters on the international gastro map.

“I personally think Geneva is reminiscent of the French style in the 90’s. The city is still stuck with their long white tablecloths, carpets on the floor, white porcelain plates, silver cutlery and predictable wine lists with only well-known, conservative wines. That for me is 90’s France. But with La Bottega and some other new restaurants the scene is starting to changing and growing, but I think it still has a long way to go”.

The city did however draw international attention, when La Bottega was the host of a heavily publicised series of events where the restaurant invited different star chefs from around the world to Geneva to do dinner collaborations. Among these big names was Atsushi Tanaka from Paris’ Restaurant A.T., Matt Lambert from The Musket Room in New York City and Diego Mun?oz formerly from Lima’s Astrid y Gasto?n. Especially the Peruvian Superstar’s humble approach impressed Francesco greatly.

“I found Diego to be a simple person who is very humble and loves the craft of cooking. He holds the title as one of the best chefs in the world, yet he doesn’t have a big ego like many top chefs unfortunately do today. He taught me that with hard work, humility and sacrifice you can definitely reach your goals.”

Working with a lot of different chefs, who each master their own style and cuisine also lit a flame under Francesco, who says that the Nordic and Japanese kitchens are

two other styles he would love to explore if he had the chance, and a Nordic restaurant is one of his favourites in the world; 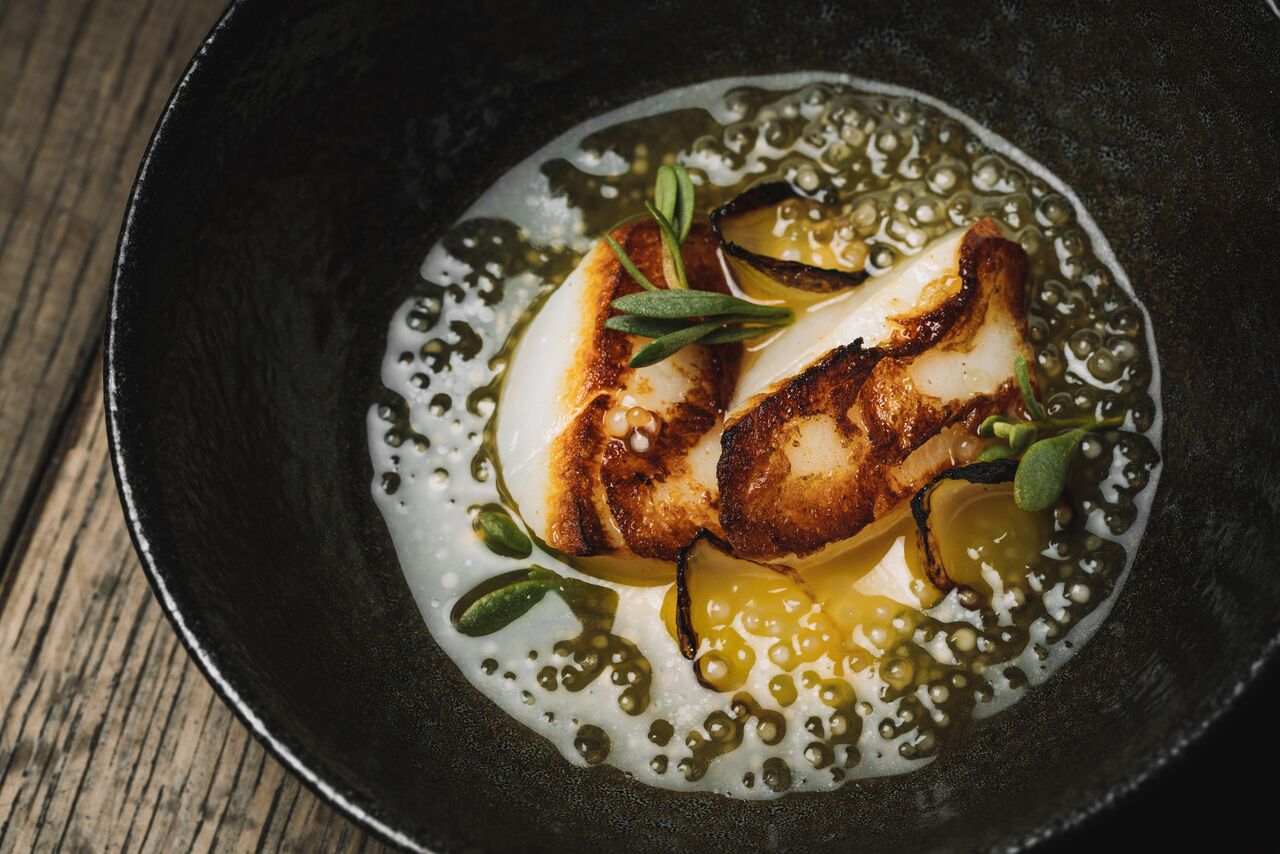 “In the past year I had one of my best meals at Geranium in Denmark. The Nordic cuisine is experimental and I definitely considered it a great experience, but it’s not something you could eat every day, like you can with for example Italian”, Francesco says, and also notes German-born Heinz Beck in Rome as a chef who gave him an unforgettable meal.

Especially Nordic cuisine has blossomed in the last decade, gathering critical praise all over the world with it’s innovation and simplicity. Will Nordic cuisine soon be bigger than Italian cuisine, which hasn’t really evolved in the recent years? Not according to Francesco.

“I definitely wouldn’t call Italian food boring. In Italy we have a long and solid food tradition and it’s not easy to change something that has been an integrated part of our culture for so long. We have a lot of young prominent chefs in Italy who are reinventing Italian cuisine, so I definitely think we will see changes. Nordic cuisine is young, and when you are young you change often. I love the Nordic cuisine, but as I mentioned then I don’t think it’s something you can eat every day, whereas Italian food is more simple, and the same ingredients Italian chefs use in popular restaurants, are the same ingredients used by grandmothers all over Italy to prepare food for the family. You can eat it every day. Also because of the latitude; we simply have more ingredients in Italy compared to Northern Europe”.

So if you live in Geneva you probably shouldn’t hold your breath expecting Francesco to open up a Nordic restaurant anytime soon. Besides the fine dining of La Bottega, he also runs La Osteria which serves more classic, high quality Italian food of that of a traditional osteria. So with two successful restaurants and the prospect of opening more in the future, we asked Francesco why he believes people all the world love Italian food so much. His answer was very simple;

“Easy! Because it’s the best!”