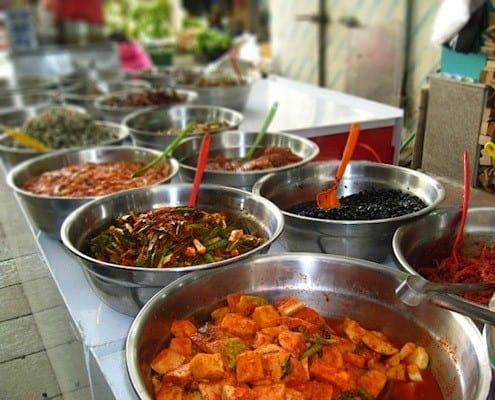 Although Kimchi can be almost instantly rejected  by the uneducated westerner who is put off by the pungent spicy sour smell, it is a natural probiotic and a staple food in Korean cuisine. Koreans would not consider a meal to be complete without at least one variation of this spicy cabbage side dish, and there are so many varieties of the stuff that it would be impossible to say you had tried every kind. Radish, beans, spring onion or the standard crunchy napa cabbage all make fantastic accompaniments to Korean BBQ, rice dishes and in this article’s case, soup.

Kimchi making is a long process and generally families have both fresh and ‘old’ kimchi in their fridge. Old kimchi can be more than a year old, and during the winter, kimchi is made in huge vats on the side of the street and out the back of resturants after which it is transferred to large outside storage pots with heavy duty matching lids, and left to literally rot over the coming year. It is then rescued bit by bit to cook something wonderful or accompany something equally delicious.

Most modern Korean fridges have a kimchi container built into the design and when I first arrived, the only thing in the apartment fridge was a plastic container of the ‘old’ stuff. I didn’t understand at that point what value there was in that box. I believed that the previous occupant must have neglected to throw this evil smelling foul in the bin. I committed a sin that day and threw the whole thing out, container and all. How I cringe now! I really can’t get enough of it and the spicy refreshing cabbage makes me all warm inside. I am still not to keen on the raw stuff though. 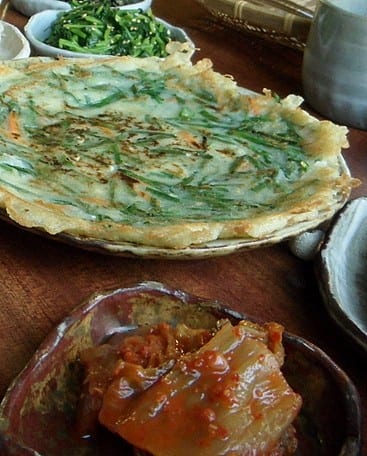 Looking back through my photos, Kimchi is an omnipresent force, at birthdays, after work occasions, day trips, even on boat trips.  This man was very friendly and in true Korean style he wanted to share his bounty with us foreigners. Too bad I was not prepared for the eye watering soju and a raw sour and spicy kimchi chaser! 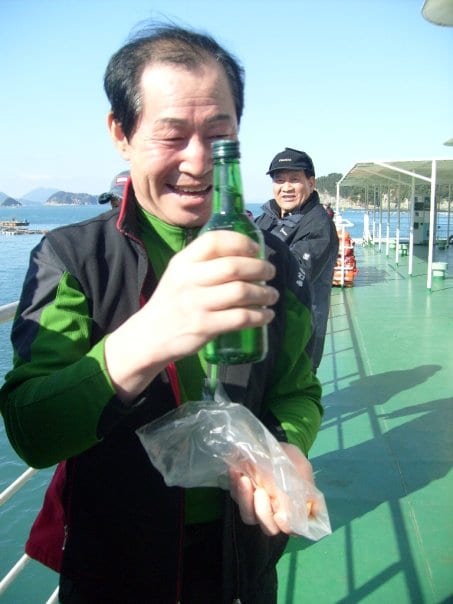 Making your own kimchi is now unnecessary and supermarkets sell the stuff in value pack bags. I am sure it is readily available in most city Asian marts. The ingredients mixed in during the fermentation process include garlic, tiny shrimp, Korean hot pepper flakes and fish sauce. Needless to say then it makes a perfect spicy stock for the famous Korean soup or stew named Jjigae in Korean.

Print
Prep Time
5 mins
Cook Time
15 mins
Total Time
20 mins
A spicy and sour kimchi soup to really wake up your palate. Add extra shredded cabbage, bean sprouts, leeks, spinach, finely cut mushrooms, diced tomato, thick fatty pork pieces or even tuna to make this soup more wholesome. It is incredibly versatile and the fermented flavour of the broth is strong enough to blend many combinations into a tasty thick and warming soup. Traditionally this soup is served in a heavy pot which is used to cook the ingredients directly on the heat. This can add an element of excitement as the bubbling soup is served to your guests, but watch out because this is seriously hot stuff! You might need to blow on your spoon! These days, many fast paced budget restaurants in Korea add a generous squeeze of corn syrup, but it is so much healthier and better without!
Author: Elizabeth Ellory
Recipe Type: Soup or stew
Serves: 2-4
Ingredients
Instructions
2.1.7
Previous Article

Dining Down Under: Strawberry Sorbet

0
Lizzie Ellory-Hoare February 1, 2012
No Comments Yet