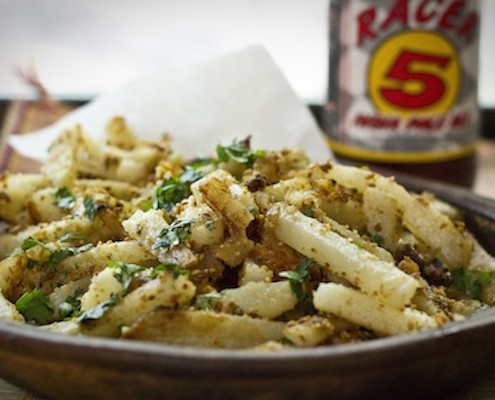 French fries go to the sub continent for a fresh Indian twist.
By Kathy Gori 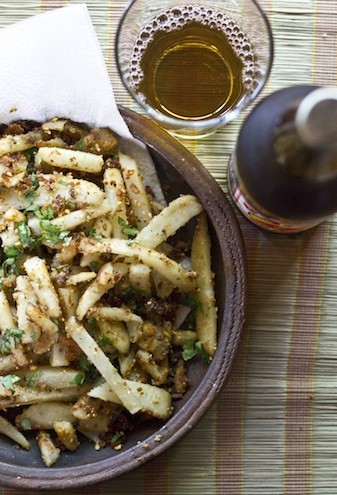 See the lovely, Indian-style french fries to the right? So innocent, so harmless, so tempting. Sitting there next to a nice bottle of Racer 5 Indian Pale Ale, it’s the perfect picture of tranquility. You should have heard what was going on in the background. SCREAMING!!! LIKE MAJOR SCREAMING.

I want to make one thing perfectly clear before I start here, and that is that Alan and I rarely fight. We’ve been married and also have worked together as writing partners for many years. I sit across the table from this man on a daily basis, and one thing I can tell you as someone who writes screenplays for a living, I couldn’t possibly work with someone I couldn’t get along with or was angry at. Not to say that we don’t sometimes disagree about the way a scene should go, or what a character might do or say, sometimes fairly loudly, but it’s no biggie. So why should an innocent plate of french fries be the cause of a major blow up? Simple, it’s all in how you see them.

I cooked this dish originally for our friend who was undergoing cancer treatment and needed to be on a strictly vegan, low sodium diet because of his radiation treatment. These Indian style french fries aka Alu Kadai, were a big big hit with him. Of course Alan saw them and they were a big, big hit with him too, except that time he wasn’t getting any. But it was such a great dish and so amazingly easy to fix that I decided I’d definitely be making it again soon. So yesterday after tinkering with it a bit, I did. And that’s when the trouble started.

You see, every time something is cooked around here it’s photographed and then it’s eaten. A lot of the time I’m hungry and hopping around saying “Take the damn picture! Take the damn picture let’s eat!!” Lately, we’ve been working like crazy trying to get the script we’re currently working on out of the house, so when we break for a meal we’re hungry, and believe me these potatoes are nothing one wants to wave around under the nose of a hungry man. Yes, they’re that good. And easy, because with the schedule we’ve been working, there’s not a lot of time to waste.

Now here’s where the fighting starts. I wanted to be very twee and build a sort of little log cabin of these fries, just a few on a plate cunningly stacked. Artsy fartsy, that’s me. When Alan saw me reaching for the tweezers he yelled, “What the….? just dump the damn fries!”

“Okay,” I said swinging the pan around , “Fine! Okay!  I’ll dump your damn fries. I’m just trying to make ’em look pretty!”  (Obviously the original dialogue  was NSFW ..but I’m cleaning things up here.) I dumped the fries angrily on the plate. “There! Happy asshole?”

“Well, I think they look like …” you get the picture.

When I say these fries are easy, I really, really am not kidding. This recipe has just a few basic ingredients. Potatoes, green chilies, roasted unsalted peanuts, cumin seed and mustard seed. That’s it. I’m not kidding around here, these are kitchen pantry basics and its ready in about 15 minutes. You can’t beat that. 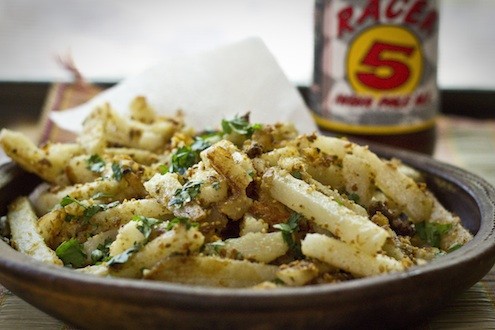 In the end, I apologized. (So did he.) I had not realized that there is a magic connection between men and french fries that does not include tweezers. He didn’t even want me to put any fries on his plate for lunch. He ate them straight from the bowl. I think the next step is for me to get a paper hat and a stack of newspapers.