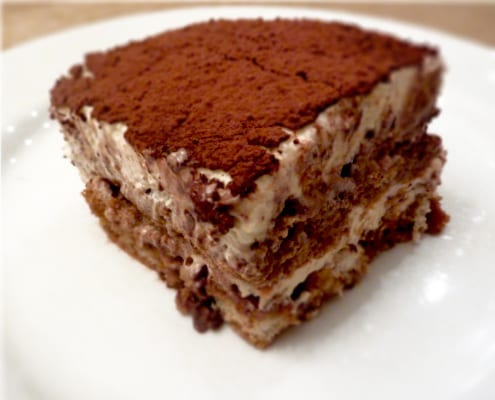 There’s only anecdotal, rather than scientific evidence that Tiramisu can improve your sex life. But there’s no harm in trying a piece or two to see if it works.
By Kathy Bechtel

My favorite Italian dessert, and probably the best-known dessert of Northeastern Italy, is Tiramisu. We make this on many of our Chefs on Bikes tours in Italy, and it is always a big hit. My son Liam requested this on his birthday, rather than a cake. So I make this quite a lot, and, as usual, am drawn to the anecdotes and history behind the dish.

Tiramisu is a layered dessert of relatively recent origin. There are various stories; some claim it originated in Treviso, at restaurant Le Beccherie, its’ name derived from the family name of a daughter-in-law of a famous confectioner. Other stories place its origin in Siena, where it was created to celebrate the visit of Cosmo III. One anecdote places its origin at a brothel, where its’ purpose was to provide a bit of a boost to weary clientele. This no doubt is more legend than fact, but it is certainly the most memorable.

For me, THE key component to a great tiramisu is the zabaglione. This is the egg custard that you make over the water bath in the recipe below. It is a classic custard that appears in various forms, referred to as zabaglione in Italian, and sabayon in French. In Italy, it usually includes sugar and is served as or with desserts. In France, it is often made without sugar as an accompaniment to savory dishes. Various liquors are used; often you will see sparkling wines like prosecco or spumante. In the Veneto, their zabaglione (referred to in dialect as zabaio) is made from egg yolks, sugar, and marsala. I prefer the lighter texture this provides over the simpler non-custard whipped cream or whipped cream and mascarpone versions of tiramisu, and I also miss the marsala. And a real zabaglione is not hard to do.

Once again, there is no single agreed-upon consensus on the origins of zabaglione. “The Penguin Companion to Food” claims that it was first produced in Florence in the Medici kitchens around 1500.
A more interesting story gives the credit to Giovanni Baglioni, a military commander in the early 1500s. He and his troops were camped near Reggio Emilia, in Emiglia Romagna, and the locals referred to him in their dialect as “Zvan Bjoun”. Scrounging what they could from the locals for food, this concoction was invented, and the troops loved it so much they named the treat after him.

This latter story, in which zabaglione is used to provide sustenance to soldiers gave rise to the practice of serving it to newlyweds, either on their wedding night, or on their first morning together. Notice a theme here? All anecdotal, rather than scientific evidence, but no harm in trying a piece or two to see if it works.