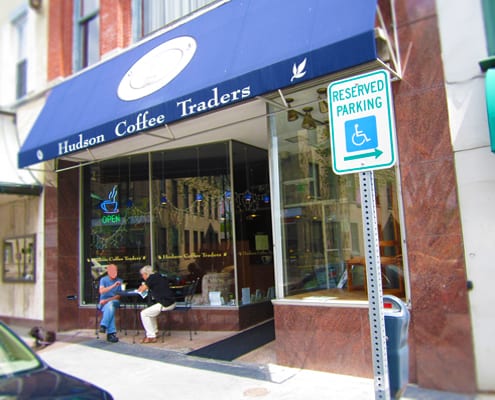 In the grand scope of American history, I feel like we never really talked about pre-British colonies like New Netherland. We never really discuss that despite the failure of the Dutch to hold onto their colony long, two of their original settlements that they started ended up thriving through the centuries (NYC and Albany). And while the third original settlement really doesn’t get much limelight any more, the city of Kingston, NY still has its points of interest.

Situated on the Hudson River, Kingston traces its roots back to the 1650s, has been the capital of New York and was burned down during the Revolutionary War. Along with its history and beautiful geography along the Hudson, the city has a few other draws, one of them for me was local coffee operation Hudson Coffee Traders.

Situated on Wall Street, Hudson Coffee Traders sits in a nice stone building with a majestic blue awning and large open windows that lead into a cozy (though a little cluttered) interior that has a back section that reminded me a lot of the Parthenon. As for coffee, they roast their own beans and after looking over the menu, I decided upon an espresso of their Espresso Blend and a drip of their House Blend. The espresso, pulled to a medium volume with marbled crema, held notes of bittersweet cocoa, lemon, garlic toast and sweet ginger, proving to have a nice balance with a decent combination of flavors. As for the drip, the House purveyed flavors of almond croissant, light chocolate, nutmeg, dandelion and a little pork rind all present within a medium body.

While I did not fall head over heels in love with Hudson Coffee Traders, I found the fare pretty scrumptious (i.e. the espresso and drip were both good but still had room for growth). If you happen to be passing through or in town for some local history, stop by this local coffeehouse for a decent cup of coffee.