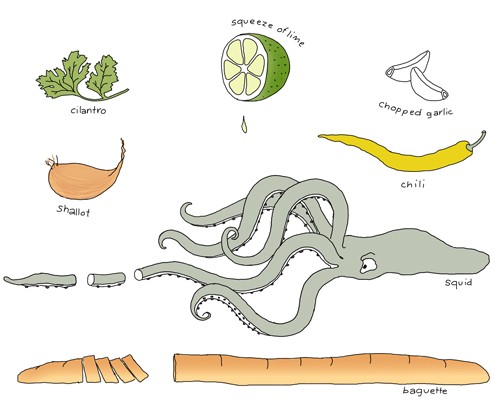 Johanna Kindvall experiences the trauma of having her kitchen kidnapped, but it all turns out for the best as the kidnapper teaches her how to cook squid properly.
By Johanna Kindvall

The first time I cooked squid was when I was saved by a South African wine maker. I had just thrown all the squid into a hot pan without knowing that would result in a rapid drop in temperature. The wine maker, who actually was a total stranger, demonstrated some simple rules (while taking over my cooking): first of all you need to have a really hot pan and second you need to fry only a few squid at a time. A low temperature pan will boil the squid instead of giving them a quick fry.

First clean the squid and dry them on paper towels. Cut them into neat bite size pieces. Heat up a pan with a tiny amount of olive oil and add chili flakes (its up to you how spicy to make it). When the pan is hot start frying a few pieces of squid at a time. When they have gotten some color, put aside and repeat until all the pieces are done. Lower the heat and soften the finely-chopped garlic in some more olive oil before bringing all the arms and pieces back into the pan. Add some sautéed shallots, squeeze in some lime and season with sea salt. Remove from the heat and sprinkle plenty of fresh cilantro. Serve immediately as a starter on bread. Enjoy!

If this stranger really was a wine maker and how he got into my kitchen is another story; by taking over my cooking he actually taught me a valuable lesson!