Kimchi is a very nutritious dish that is high in fiber and low in calories because the main ingredients are vegetables.
By Sarah Platanitis
I’m no stranger to Korea’s spicy national dish. I’ve written about it and ate it at teeny cafes in Seoul when I stayed there waiting for a work visa. My Korean ESL students are pretty excited when they hear that I’m brave enough to eat it. They tell me about the awesomeness of kimchi jjigae (stew) kimchi bokkeumbap (fried rice) and kimchi jeon (pancakes). 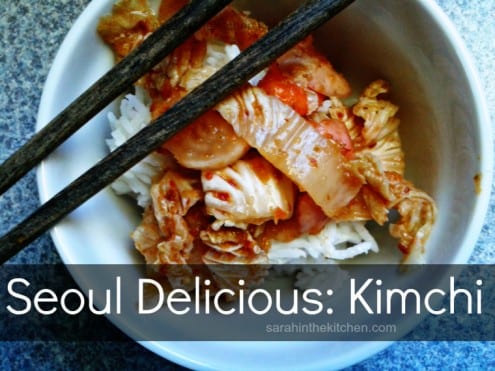 Kimchi is a very nutritious dish that is high in fiber and low in calories because the main ingredients are vegetables. Napa cabbage, radish and scallion are staples in the recipe but there are over a hundred varieties and they’re all catalogued the Kimchi Field Museum in Seoul. Yes, Virginia, there really is a kimchi museum and they have many strange dioramas.

What gives kimchi its kick is the seasoning. Ginger, chopped radish, garlic, the list goes on. Gochugaru, or hot chili pepper flakes, is added to the mix. It’s pretty spicy to us Westerners but also has a bit of a sweetness if you’re daring enough to try it solo. The northern prefectures of Korea prefer less salt and spice while southern prefectures go big or go home. They add anchovy or shrimp brine to give you an extra kick, as if you really even needed it.

Kimchi is fermented.You can learn all about that here but basically it means that it has to sit a while before it becomes delicious. Not the most technical definition but you get the idea. Old school kimchi was buried in jars underground and fermented for months. Before refrigeration, kimchi production was heavily dependent on the seasons because temperature plays such a big role. Nowadays, there are kimchi refrigerators specifically designed to keep kimchi at the best temperature during fermentation.

Five Fun Facts About Kimchi:
1. Koreans eat 40 pounds of it per person every year.
2. It’s chock full of vitamin C and carotene.
3. Koreans say “kimchi” instead of “cheese” when posing for photographs.
4. White kimchi (baek kimchi) isn’t spicy and is a little like sauerkraut.
5. Kimchi is responsible for the development of spoons in Korea.

Put an Egg on It! 10 Ways to Top Meals with an Egg