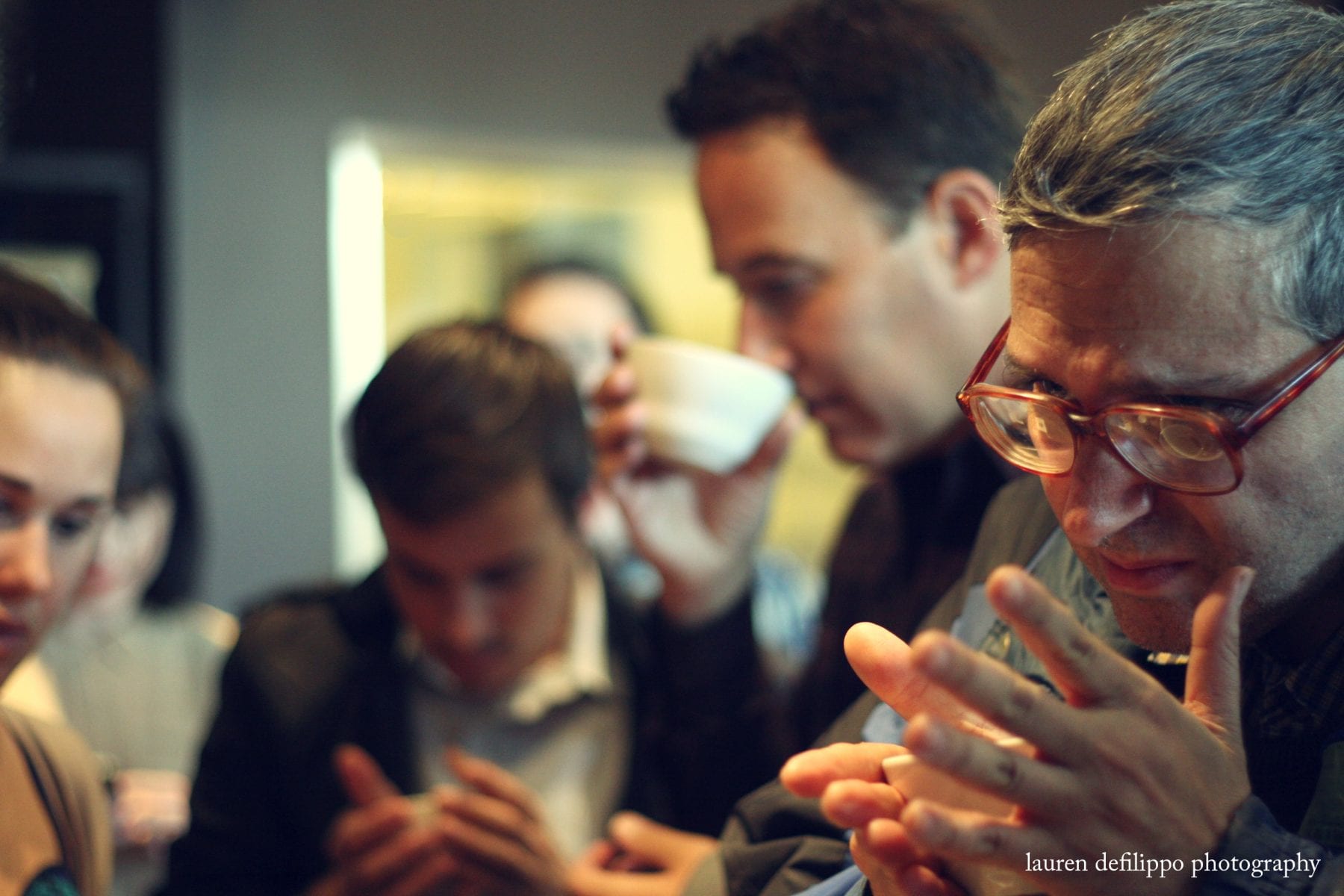 We don’t often think of coffee as an ingredient, a product to be manipulated by temperature and technique to achieve a certain sensory effect. But whether we’re considering the origin of the beans, how they are ground or the increasing range of steeping techniques, coffee is just that—the starting point in an evolutionary process, a drinkable choose-your-own-adventure.
By Carly DeFilippo 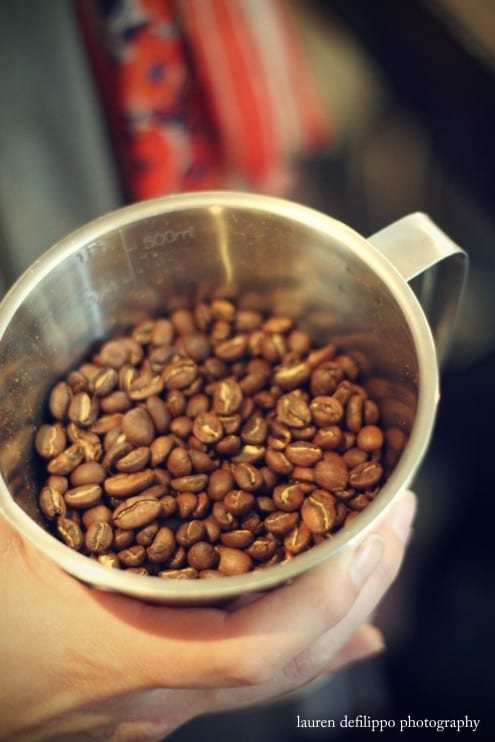 Coffee isn’t regarded this way by most consumers, because we rarely have the chance to experience proper tastings—side by side comparisons of different beans, roasting techniques or brewing styles. But at this year’s Food and Book Fair, I had the unique chance to do just that. Hosted by New York Times contributor, Oliver Strand, and illustrator/coffee afficionado Lars Huse our “coffee crawl” explored the caffeinated creativity of a few particularly tasty blocks in Williamsburg. 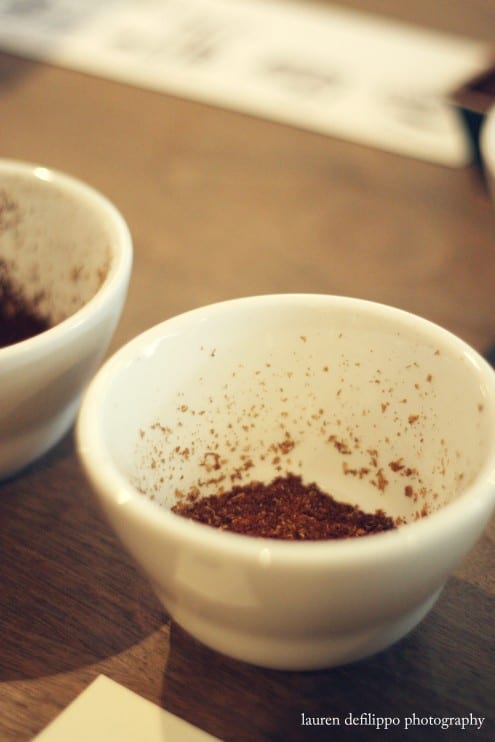 We first checked out Toby’s Estate, for a “cowboy coffee” cupping. A “cupping” is the industry term for a coffee tasting, and this rudimentary style of brewing eliminates variables that might otherwise influence  our perception of a certain bean’s properties. In this case, we were looking to understand the complexity of roasting, under the guidance of one of Toby’s in-house experts. 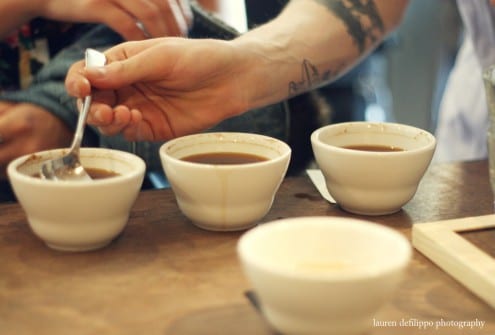 In the roasting process, beans start at about twelve percent moisture. The green color of raw beans is a trait of chlorophyll, which slowly roasts out as the beans heat. During this process, the polysaccharides break down into monosaccharides, and help establish sweetness in the form of fructose and glucose. As the beans dry, they fade from green to yellow to orange. They also expand and when the moisture finally reaches the point of becoming gas, it emits an audible crack, similar to the sound of popcorn. A roaster is looking for something in between an underdeveloped bean (“baked”) and a “roasted” bean, one in which the taste of the roast overtakes the coffee’s inherent qualities. 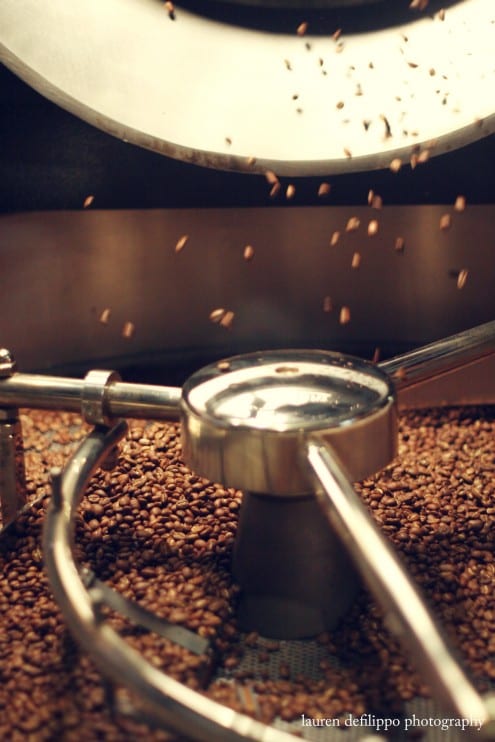 After tasting quickly brewed beans which had undergone varied degrees of roasting, we headed over to Blue Bottle, to experience the range of flavors and textures provided by brewing the same ground coffee in different ways. In this case, we were tasting Rwandan Kirezi coffee, a bean prized for its qualities, but that also provided a considerable risk to coffee brewers. For one reason or another, Rwandan beans are subject to a “potato defect”, which means that if one bad bean heats up in the roaster, the entire facility will smell like fried potato. When this happens, shops literally have to halt production and clean out the roasting machine in question, losing not only the current batch of coffee, but also valuable time—and the potato defect, unlike a “quaker” (underripe bean) cannot be spotted by eye. 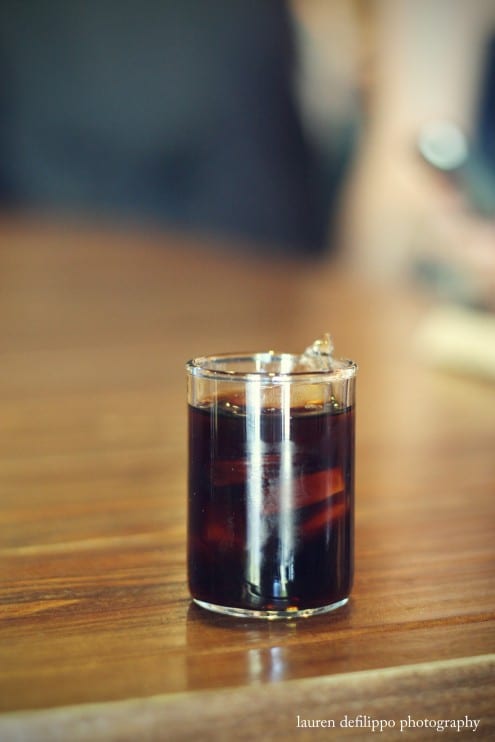 We first sampled a cold brew, which expressed a highly developed mouthfeel and surprising level of sweetness. Prepared with a Japanese Oji brewer, this slow, 10-12 hour process also packs a mighty punch of caffeine, as the longer the brewing method, the more caffeinated the beverage. From there we sampled a Chemex brew, a style that hails from Chicago in the 1940s. This method requires “blooming” the coffee—to pour water slowly over the filter while the gases (“the bloom”) rise. The flavor was light and clean, but far less sweet (and caffeinated) than the cold brew. Last, we sampled a French Press coffee, an infusion brewing style that rendered an oilier, more viscous cup. 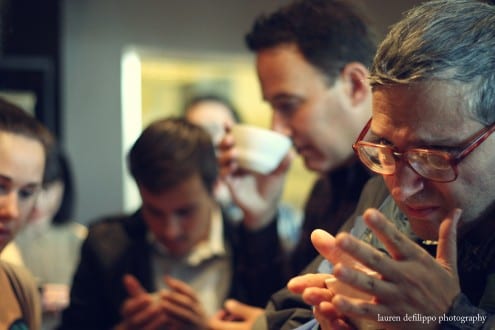 Waving off our growing “caffeine jitters”, we continued on to Sweetleaf Espresso Bar. Oliver chose this shop because it is one of the few that offer multiple types of espresso. An espresso grinder costs $1-4,000, and since each bean requires its own grinder to preserve its subtle character, it’s an investment many shops aren’t willing to take on. Tasting Ritual Coffee‘s “Stickball Blend” and “Rwanda Kiringue”, it was remarkable to note the differences in the darkness of the roast and the acidity of the flavors. If you’ve never tasted two espressos side by side, it’s certainly an interesting experiment. 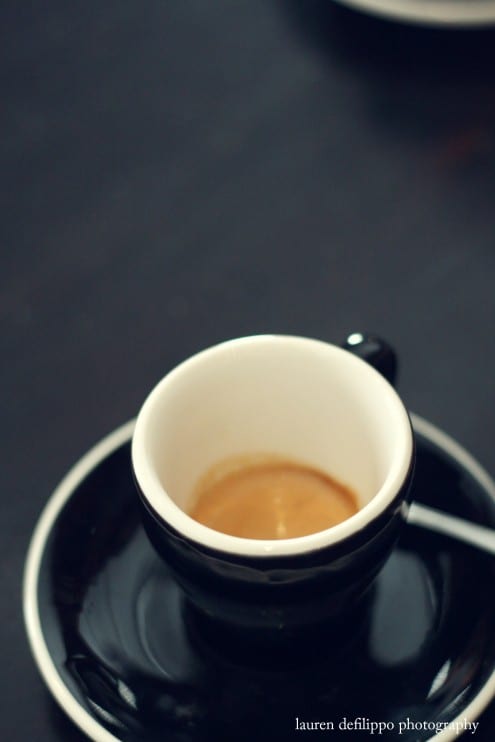 From there, the wired group headed back to the Wythe, the epicenter of the Food & Book Fair. I had to step out to attend another FBF lecture, but left with the buzz of both caffeine and newfound curiosity. 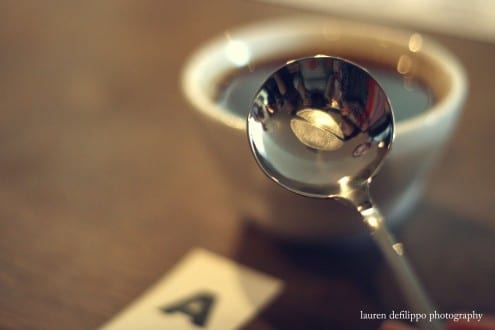 Others have called coffee the “new wine”, regarding our growing interest in single-origin blends, roasting methods and styles of preparation. However, unlike wine, coffee offers a unique hobbyist element, in that almost anyone can play around with different brewing methods at home. If I had to choose, I’d probably opt for an (admittedly pricey) Oji brewer…but for the time being, my old-fashioned Italian moka will do.