Venice is for many a glamourous city of luxurious hotels and ludicrously priced restaurants. Outside of San Marco Sestiere however, there is an ever dwindling, but still thriving local community.
By Jess Lacey 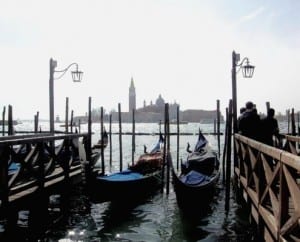 Venice is for many a glamourous city of luxurious hotels and ludicrously priced restaurants, a place to battle through throngs of tourists while avoiding making eye contact with the gondolier who wants to lure you into his boat. Outside of the San Marco Sestiere (area) however, there is an ever dwindling, but still thriving local community. At the heart of these are bacari, and cicchetti. Bacari are small, usually dark and simple wine bars, generally selling local wines from the Veneto. Cicchetti are the bar snacks that accompany these. Traditionally they often involve miniature sandwiches called francobolli (also the word for postage stamps), small open crostini, or deep fried meatballs called polpette. These are then washed down with a small glass of house wine (un ombra). These dishes usually cost around one euro, with an ombra setting you back between one and three. A giro d’ombra (a stroll of the shadows) is a pub crawl of sorts along these bacari, having a glass of wine or a cicchetti or two in each, and these are a few of my favourites. 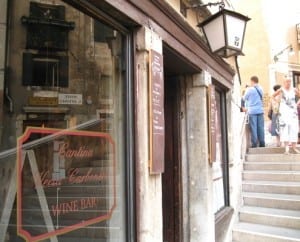 Many of the most famous ciccheti bars are located in Cannaregio, along the Strada Nuove. This street is one of the hearts of local Venice, although it has been infiltrated by some souvenir shops. Starting from the direction of the station, the first stop is my favourite, Cantina Vecia Carbonera (Cannaregio 2329,Ponte Sant’Antonio). This long dark bar running along the side of a canal has quite a lot of seating (unusual for bacari where you tend to use your elbows gratuitously to hold a spot). The cicchetti are mainly of the open sandwich variety, with an excellent selection ranging from anchovies, salt cod and bresaola to stewed peppers and cheese. If you are lucky, you will also find polpette. All of these are about 1 euro each, as are the ombras. The staff are offhand and inattentive in a manner typical of these bacari (which I find strangely charming). When I informed the barman that there was no toilet paper left in the bathroom, he told me ‘there is no more’ as if this was a situation that was impossible to rectify in a place located one minute from an open supermarket. 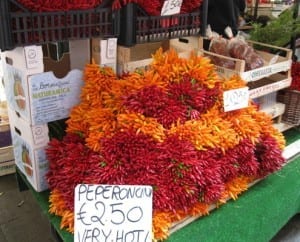 Ca D’Oro – Alle Vedova (Cannaregio 3912, Ramo Ca’ d’Oro) is possibly the best known Cicchetti bar, and one which has standing room only. It is actually just the bar area of a proper sit down restaurant, and one that is a little confusing. This is *the* place for polpette, with plates of them disappearing within minutes of their arrival from the kitchen. The glass cabinet on the counter displays a selection of cold food, some of which are cicchetti and some of which aren’t. When we gestured to a cold seafood salad and asked for a cicchetti of this, we were promptly given a large plate and charged nine euro, so essentially getting the restaurant experience without the luxury of a chair. 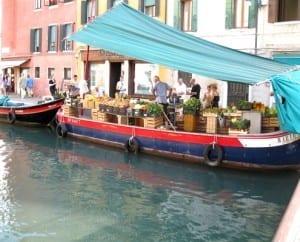 Moving on we found La Cantina (Cannaregio 3689, Campo San Felice) a bar with a prime location on a square on the strada nuove, with plenty of seats outside to watch the elegant Venetian evening strollers glide by. On the bar was a large bowl of fresh oysters, a selection of which can be bought for about €9, but by this stage we were a little bit tired, full from Alla Vedova’s octopus and bewildered by the absence of any other displayed food or menu. We settled for a slightly overpriced ombra (around €3) and a sit down outside to replenish us before our long walk to our next stop across the Grand Canal. 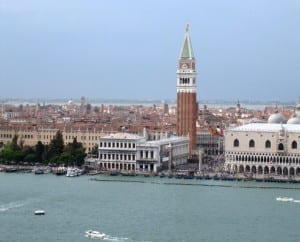 Cantinone–già Schiavi (Dorso Duro 992 Ponte San Trovaso), is another Venetian classic, opposite the last working boatyard in Venice. When we were here, the selection was an epic array of open faced sandwiches, all for one euro each. I tried a spiced ricotta with pumpkin, and himself tried a tuna salad. Several of the cicchetti were decorated with tiny flowers, which is definitely one way to dress up egg mayonnaise. They had a number of different wines by the glass from around €2, as this is also a functioning and well stocked wine and spirit shop with a lot of reasonably priced bottles to take away. This encouraged me to try a few wines, and also a few more cicchetti (a leek and pecorino combination was particularly excellent) in a sort of wonderfully vicious cycle of must have a cicchetti to soak up with the wine, must have wine to go with the cicchetti.

Following this, we wobbled off unsteadily in the direction of the Rialto Market, where a number of bars have set up facing the Grand Canal, offering a quiet nightcap while you watch the boats go past. 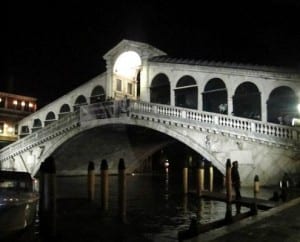