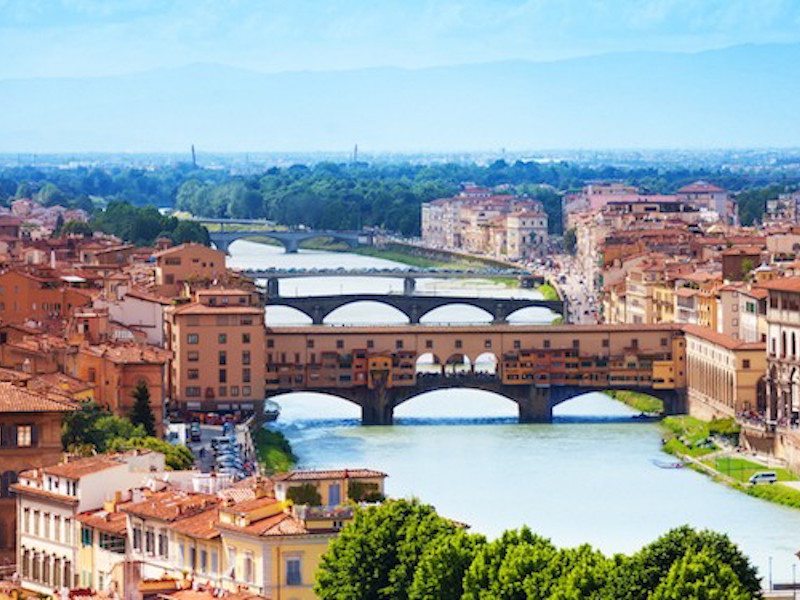 How to explore the beautiful art and architecture of Florence, Italy while nibbling on an Iris cake. 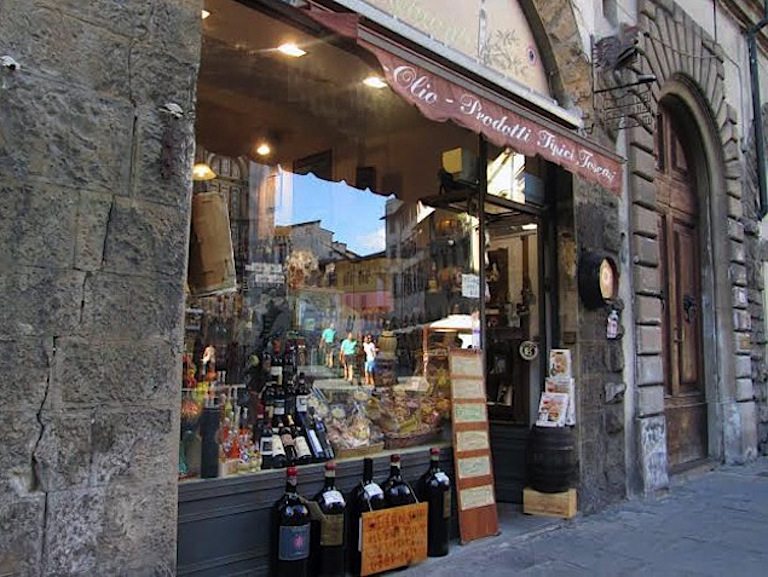 FLORENCE: THE CAPITAL OF ART
There is no place in Italy (not even in the small towns) that does not preserve traces of history, art and culinary tradition. I have always maintained that to know Italy (especially for Italian) is a real job that requires passion and love for beauty, time (the so-called tourism “hit and run” is not recommended to visit Italy) and knowledge. While visiting several times the same city, or region of Italy, the feeling is that you have not yet discovered it. The beauty of traveling, basically, is this: find the justification to return in a place again and again. As if this was not enough. So that’s the effect that many tourists, including me, try visiting (or revisiting) Florence. The wonder of wonders. Florence is never enough.

He had to think so also the famous French writer Stendhal who, during his stay in Florence, in 1817, was stunned after visiting the Duomo. This psychosomatic condition (which causes confusion in people put in front of works of art of extraordinary beauty, especially if they are compressed in a confined space) is now known as “Stendhal Syndrome”, or “Florence syndrome” (city in which it is often manifested).

Art is the excellence of a city that has had its heyday moment in the Renaissance. More than two thousand years of Florentine history, from the city’s Roman origins to a 15th century palace, from the Ponte Vecchio, through the famous Uffizi courtyard (Galleria degli Uffizi), to the Brunelleschi’Dome which overlooks the Baptistery’s golden “Gates of Paradise”.
Must stop at the Galleria Michelangelo, for the exhibition of the interactive machine reproduced from Leonardo’s codices. To deepen the study of the Italian genius, is recommend a visit to her childhood home in the small and charming village of Vinci, 40 km from Florence.

The Uffizi Gallery is one of the most famous museums in the world and it is housed in the former “Offices”, “Uffizi” of the Medici Family. While admiring the most renowned artworks of the period (Cimabue, Giotto, Botticelli, Leonardo Da Vinci, Michelangelo, Raffaello, Tiziano), you will be able to understand why Florence was the birthplace of the Renaissance.
A must is a visit to Dante Alighieri’s house, the father of the Italian language, the author of the “Divine Comedy”, a masterpiece of world literature.

The archaeological museum in Florence houses one of the most important collections of Etruscan art in the world.
Rich in public and private gardens (the latter to visit by reservations only), Florence is a city where greenery and nature abound. Suggested is a stop at the “Parco della Cascine” and to the Botanical Gardens “Giardino dei Semplici”, the third oldest and largest in the world, after the botanical gardens of Pisa and Padua.

Capital of Italy from 1865 to 1971 and UNESCO World Heritage Site, Florence has a rich tradition of geographers and explorer. The New Continent derives its name from a Florentine, Amerigo Vespucci. On this issue, is suggested the visit to the “Hall of Maps” in the Palazzo della Signoria, which houses the representations of all the continents known until the second half of the sixteenth century. 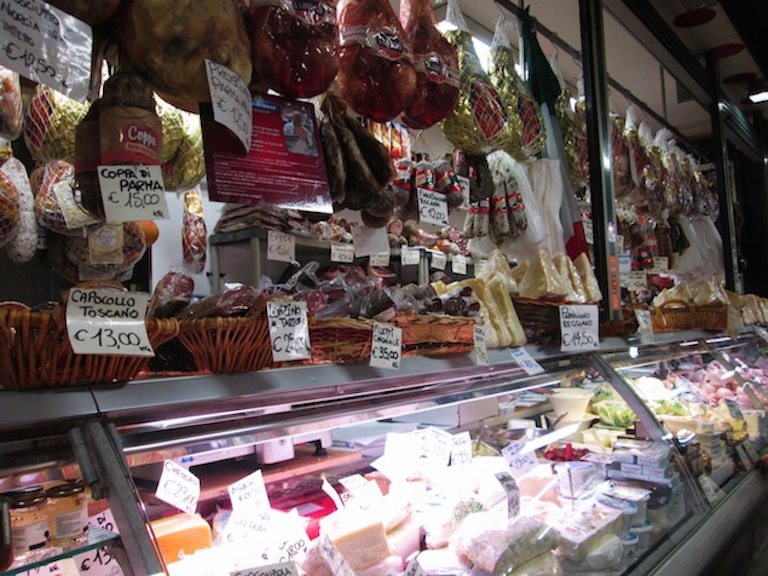 THE WALKING TOWN
While fully immersed in the contemporary world, Florence is a city on a human scale, a walking town, where bicycles, pedestrians, cars, and even carriages that carry tourists around the city, live in harmony, giving a sense of well-being that soothes the soul.
You can visit Florence by bike, on foot or by carriage, but the most important thing is that you do it by taking all the time necessary to absorb fully the great treasures that the city offers.

In Florence, the camera never goes out, but often the tourist crowd is so dense in every corner of the old town that you have to wait before being able to carve out a space for a special hot. But it is always worth it.

Between one step and another, in the town center, do not miss to capture, the residences where were born some great Italian inventors, such as Antonio Meucci, who in 1892 invented the telephone, and Guglielmo Marconi, the creator of the wireless telegraph that earned him the Nobel Prize in the early twentieth century.

Walk to the center of the city, at night, on the banks of the Arno, is one of those simple luxuries that is priceless. Walk aimlessly, enjoy the lights of the city and its streets (always so neat and clean) that are empty at night from the crowd of tourists, making you feel free and in control of the city.

WHERE BEAUTY AND CULTURE MEET THE TASTE
The Tuscan cuisine is one of the cornerstones of the Italian culinary tradition. In Tuscany, as in the rest of Italy, every city, even every neighborhood, offers its own gastronomy and culinary history. For this reason, Italian cuisine requires careful studies that can never regardless of the historical and cultural traditions of various locations and knowledge of the territory and its population. In Tuscany, the rivalry between the various city is historic and caused riots in ancient times (the Florentines, for example, rather than considered themselves Tuscans, prefer to be-called Florentines). A rivalry that has found a way to extend also in the culinary field. Each city has its own sweet with a centuries-old tradition. Siena holds the record for the famous desserts: the “Pan Forte” (typical Christmas cake whose origins date back to the year one thousand); the “Ricciarelli” (made with almonds, sugar, egg whites, “Ricciarelli” are made with a kind of marzipan dough, enriched with a mixture of candied and vanilla).
Lamporecchio, in the province of Pistoia, is famous for the “Brigidini”, brittle wafers, with essence of anise.

The city of Prato is known for “Cantuccini” or “Cantucci”, cookies with almonds, obtained by slicing the loaf of dough still warm. They are part of the most typical dessert of traditional Tuscan cuisine, especially paired with Vin Santo.

In Florence, “Torta Iris” is the most popular cake, a tribute to the city whose symbol is the lily. At the old Alfredo and Lina Gualtieri’s bakery, you can enjoy the original cake.

Another Tuscany and Florence pride is the “Bistecca alla Fiorentina”, high quality product, made from two types of beef, the “Chianina” and the “Maremma” (from animals raised in the wild, respectively, in the Val di Chiana and the Maremma). The Tuscan salami are typical products that characterize the region. Among the most valuable, the “Finocchiona” and salami of “Cinta Senese”, niche products of excellent standard.

Tuscany is also known for its bread. There are so many delicious and precious recipes made with bread and born from the so-called “poor cuisine” that have become famous worldwide as the “panzanella”, the “pappa al pomodoro”, the “Fettunta” “vegetable soup”, just to name a few. The tradition of cheese is very rich. Pecorino is the most prized product, in particular those of Pienza and Maremma.
Tourists visiting Florence, will find the products mentioned, and many others (including the excellent wines) in grocery stores, food and wine shops, scattered in large quantities, in every corner of the city.

The visit to the central market (Mercato Centrale), in Florence’s San Lorenzo neighborhood, is a feast for the eyes and the palate. All the good of Tuscany, at reasonable prices, in a nice and tidy market more like a precious jewelry. On the first and second floors of the food market, you will find small, delicious restaurants-bistros, restaurants, cafes, a master baker who, every day, churns, in limited quantities, the famous “Pane di San Lorenzo”, San Lorenzo’s bread (named after the neighborhood where the market rises and where there is a mansion that belonged to Lorenzo De’ Medici, ruler of the Florentine Republic during the Italian Renaissance and also known as Lorenzo “Il Magnifico”, the Magnificent).

Within the market, on the second floor, the gorgeous kitchen, where you can participate in courses of Italian cuisine.

Also in Florence (as in Rome and the most important Italian cities), you will find “Eataly”, the food market with Italian food specialties, where you can enjoy the best of Tuscan cuisine. The city also offers restaurants and trattorie, where, at affordable prices, you can enjoy delicious local tuscan local food.

PROCACCI: LUXURY FOOD- TRUFFLE PANINI
Via Tornabuoni, today shopping street, from the late nineteenth hosted specialty luxury food stores, the flagship of the city. Here, Count Negroni invented the namesake cocktail, the Negroni. Also in this street, at the end of the nineteenth century, Leopold Procacci opened his culinary store, soon famous for creating rich truffle preparations. Today, in the small shop, the atmosphere of those years remained intact. Taste one of the famous “truffle sandwiches” is real treat to indulge in a stay in Florence

Eating Your Way Through Cortona, Italy