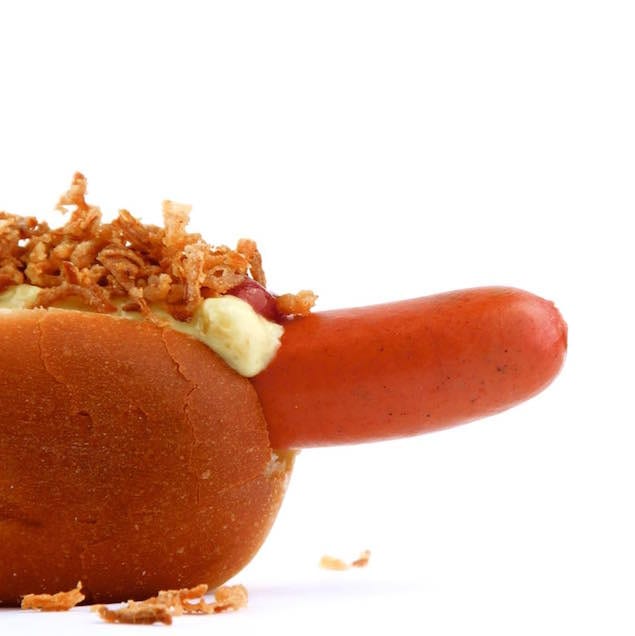 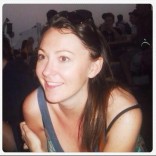 Hannah Sloane lives in Brooklyn and is working on her…

With the street food revolution creating an abundance of tacos, dumplings, and souvlaki vendors isn’t it time Nordic cuisine got in on the action too? Be sure to check out Danish street food at NYC’s NORTH Festival and discover the recipe below.
By Hannah Sloane 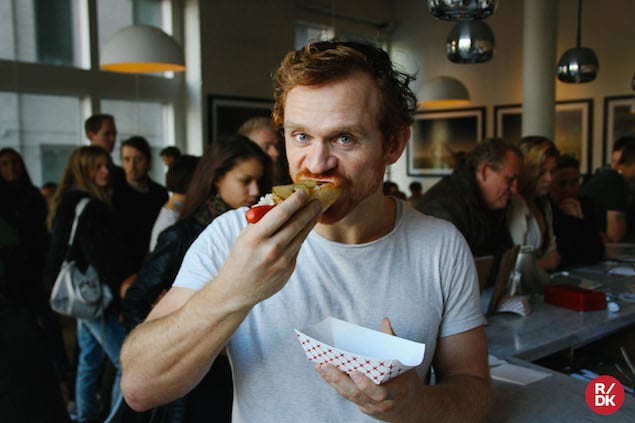 It’s a Friday evening in January and Martin and Sera Høedholt are hosting an intimate hot dog tasting in their uber-modern, sparsely decorated Park Slope apartment located one block from Prospect Park. They’re a young and attractive couple, exuding the happiness of newly-weds. They’re also the Brooklyn-based duo behind Revolving Dansk and their aim is simple: to bring the Danish hot dog, which is the street food of Denmark, to the U.S.

The Danish hot dog is considered one of Denmark’s national dishes and, perhaps because of this, their hot-dog related terminology is more complex than our own. While in America “hot dog” refers to both the sausage and the meal, in Denmark it’s only considered a hot dog once the sausage is cushioned in a bun and piled with toppings. Prior to that it’s a sausage, which is called a pølse, or pølser for plural. Hence Revolving Dansk’s slogan: “IT’S NOT A HOT DOG. IT’S A PØLSE.” There are two types of pølser: the classic Danish røde pølse (red sausage) and the grillpølse (grilled sausage). Revolving Dansk has recreated and promoted both at an assortment of pop-up restaurant and street food events across Brooklyn and Manhattan. Now they’re preparing to launch their freshly produced Copenhagen Street Dog røde pølser and grillpølser in grocery stores and restaurants throughout New York City.

Tonight they’re cooking Copenhagen Street Dog grillpølser with a lively ensemble of toppings. The toppings are suggestions from the public through a competition and social media campaign marketed as the “Revolving Dansk Winter Hot Dog Championship.” Members of the public can tweet or post their suggested toppings. The hot dogs we try include the “God Morgen Dog” topped with sriracha-ketchup, jalapeño coleslaw, deviled egg cream, and bacon and “The Mexi-Dog” topped with pico de gallo, guacamole, pickled jalapeño, and fresh tortilla chips. The following month they host a finalist event at Jimmy’s No. 43 in East Village. The “God Morgen Dog” wins. 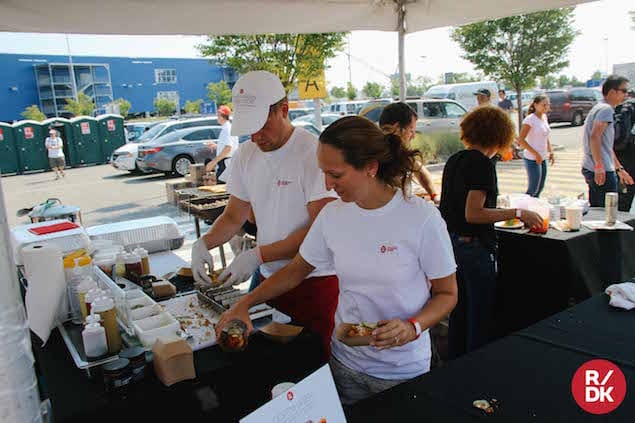 A Winter Hot Dog Championship seems like an unusual idea. America associates hot dogs with the summer, that magical season when the hot dog springs into ubiquity at baseball games and July Fourth parties. It’s a patriotic staple with Americans consuming roughly seven billion hot dogs between Memorial Day and Labor Day. It’s indelibly ingrained in New York culture thanks to Nathan’s Hot Dog Eating Contest, a Coney Island tradition since 1972. But in Denmark the hot dog is a year-round staple.

“I grew up on pølse. It’s phenomenally popular at home,” explains Danish-born Martin Høedholt as he cooks Copenhagen Street Dog grillpølser on his stove top.

Martin is tall and athletic in build and, it occurs to me, a better poster boy for the hot dog than the image we tend to associate with its regular consumer. His appearance is classically Scandinavian: fair skin, blond hair, blue eyes. He speaks near-flawless English, suggesting he’s lived in New York longer than four years. He tells me there’s a pølsevogn (hot dog wagon) on almost every street corner in Denmark. It’s the pølse’s remarkable popularity in his homeland, and its complete lack of representation in New York, which gave him the idea to popularize the food he misses most.

New York is no stranger to the concept of street food and prides itself on its diversity of ethnic cuisines, which begs the question: are we about to see the meteoric rise of the Danish hot dog? I was skeptical at first. Hot dogs are American! Why would New Yorkers welcome the Danish hot dog into their hearts? Well, quite simply, it’s better. The røde pølse is juicy, extra-long, and beechwood smoked and the grillpølse is crisp on the outside of course with the inside juiciness on the inside.

“It has an original snap that makes American hot dogs jealous,” Sera says with a cheeky grin.

“We’ve retained the best elements of the pølse, like the smoky, traditional flavor, but with none of the nitrates, hormones, or antibiotics,” explains Martin. “It’s made with locally sourced, natural ingredients, it’s 100% pork, and it’s gluten free.”

Martin and Sera have come a long way since 2013 when they produced pølser in their Boerum Hill apartment and smoked them in an industrial-sized smokehouse on their fire escape. Now they’re producing it en masse through a partnership with a local factory and heritage breed, free range pig farm in upstate New York. They’re in conversations with grocery stores about launching their brand of pølser, starting in Manhattan and Brooklyn, and expanding to the California area, as well as with local restaurants keen to include the Copenhagen Street Dog pølser on their menus.

As much as their mission is to bring Copenhagen street food to the U.S., it’s also about building a community. Danish ex-pats follow Revolving Dansk and their Copenhagen Street Dog brand on Twitter, Facebook, Tumblr and Instagram thrilled to have found a venture that caters to their cravings from home. Since launching in July 2013 Martin and Sera have heard from people in California, Florida, Arizona, D.C., Mississippi, Iowa, and North Dakota, all of whom want to open a pølsevogn and inquired whether Revolving Dansk could ship pølser to them.

Martin and Sera are easily recognizable at their events. They wear matching Danish-themed t-shirts, they wave to friends and welcome newcomers. They’re excited to share their love of Danish cuisine with others. While the husband-and-wife dynamic might spell disaster for some businesses, it works for Revolving Dansk. Sera moved to New York from Ohio in 2003 to study at NYU. She holds a Ph.D. in psychology and she’s a financial whizz with a background in marketing. She brings a strong understanding of American culture (also, she is taking night classes in Danish) while Martin, who works for a large management consultancy firm by day, brings the passion and experience for Danish cuisine and culture. Their vibe is friendly and personable, a style the Danish refer to as “hygge”, and it’s working with customers requesting more events and restaurant-owners inviting them back.

“They have a different approach from other vendors. They spend a lot of time considering the marketing and branding of what they’re doing,” Jimmy Carbone, the man behind Jimmy’s No. 43 and Pig Island, tells me.

Revolving Dansk’s pop-up events are the most popular Jimmy’s No. 43 has ever hosted, attended by a large community of Danish-Americans. Last year at Jimmy’s No. 43 they treated crowds to the “perfect pølse pairing,” matching their tasty dogs with hand selected brews by Evil Twin Jeppe Jarnit-Bjergsø.

“It was the most brilliant idea to have a toppings contest,” Jimmy says, referring to the Winter Hot Dog Championship. We’re in a bar on Lafayette and Broadway and Jimmy’s looking at the bar menu. “I really want a pølse,” he says. “I wish they had pølse here.”

The first time I tried a Copenhagen Street Dog by Revolving Dansk was at a pop-up event at Sycamore Bar and Flower Shop. It contained none of the rubbery texture reminiscent of baseball games. The toppings were refreshingly different from an American hot dog, packed with fresh, locally produced Scandinavian sweet pickles, crispy fried onions, chopped onions, Danish remoulade, ketchup and mustard. The hot dog tasted sweet and yet importantly not too sweet. It’s a winning combination the Danish call “pølsevogn-style” (in reference to how Danish hot dog wagons dress the pølse).

Scandinavian fare has grown from scarce to commonplace in recent years, the wave of “New Nordic” cuisine evidenced by restaurants like ACME, The Copenhagen, Aquavit and Tørst sprouting up across New York. These restaurants represent a premier dining experience with items like sliced raw squid with cabbage stems and sweet shrimps wrapped in ramson leaves on their menus. Martin is proud of the haute cuisine his country is reputed for and, similarly, Revolving Dansk uses only the freshest ingredients. And yet their business stands apart for being refreshingly down-to-earth compared to its peers.

The trend for Nordic cuisine isn’t disappearing any time soon. Last summer the Metropolitan Transportation Authority announced plans to convert 16,000 square feet of space in Grand Central Terminal’s Vanderbilt Hall into a Nordic-themed food hall and brasserie. The project is being overseen by Claus Meyer, co-founder of Noma in Copenhagen, and is expected to open in 2016. A Nordic take on an American favorite seems like a smart bet and if anyone can take on the American hot dog market, Revolving Dansk is its best contender.

At their Park Slope apartment in January I tell Martin I’m amazed hot dogs are a year-round staple in Denmark. It’s frigid cold outside, more snow is forecast and I’m thinking of the vendors I see on Lexington Avenue and Central Park South in the summer, selling those oblong, shiny slithers of meat that don’t look appealing.

“The closest thing I can compare the Danish hot dog to is pizza,” Martin tells me. “New Yorkers take pride in their pizza and it’s something I find easy to relate to.”

Yes, pizza is the perfect example, hovering somewhere on the spectrum between fast food and gourmet. There are those thin slices of pizza with just the right amount of crispiness, none of the oiliness, and they taste delicious despite containing the simplest of toppings. I still salivate at the memory of the Rosso pizza (tomato, oregano, garlic) at Roberta’s in Brooklyn. While every New Yorker has a different response to the question of where does the best pizza, in Denmark they discuss which is their favorite pølsevogn.

So is New York ready for the Danish hot dog? I think so.

Have a bite of a Danish classic for yourself with the recipe below. Revolving Dansk will be serving their street food creations during NYC’s NORTH Festival. This Nordic food festival will take place September 23rd to the 28th. Find more info here!

Recipe: How to make the classic Danish Hot Dog

Print
This classic recipe can be made with Røde Pølser (boiled) or Grillpølser (grilled).
Cuisine: Danish
Serves: 5 servings
Ingredients
Instructions
3.2.2885 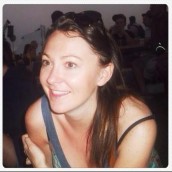 Hannah Sloane lives in Brooklyn and is working on her first novel. More of her essays and fiction can be found at: www.hannahsloanewrites.com or say hi to her on twitter @hansloane