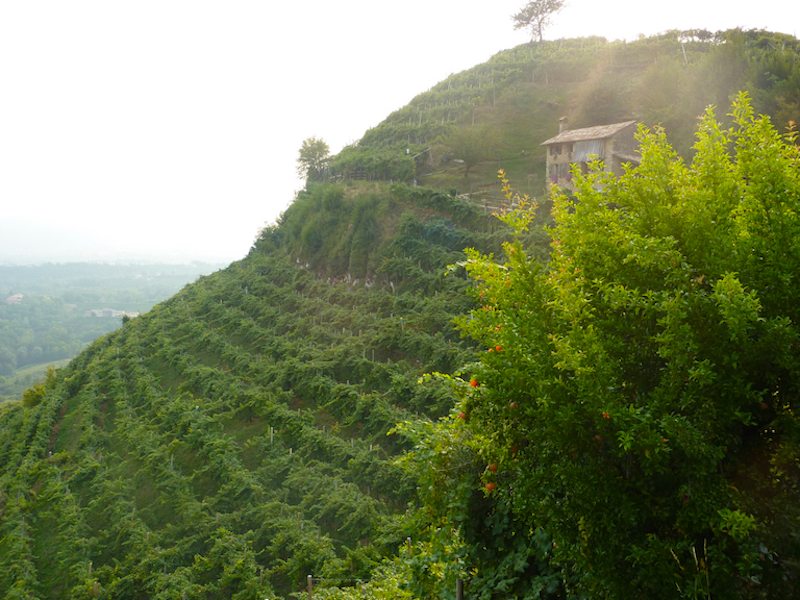 Prosecco has been produced for over 10 centuries in the foothills of the Marco Trevigiana, running from Valdobbiadene to Conegliano in the province of Treviso. 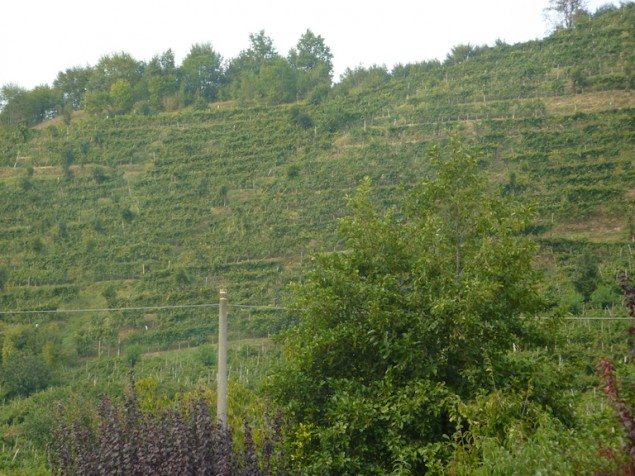 Lying north of Venice, amongst picturesque towns with ancient churches, castles, with vineyards taking up just about every square foot of land, is the Prosecco wine region, source of the wonderful sparkling wine that is served everywhere in Italy. This lovely area of the Veneto lies in the foothills of the Alps, with ancient terraced vineyards clinging to the sides of every possible slope. For hundreds of years, the locals have appreciated that their unique terrain affords the perfect combination of drainage, air currents and sun exposure for the production of these refreshing sparkling wines.

Prosecco has been produced for over 10 centuries in the foothills of the Marco Trevigiana, running from Valdobbiadene to Conegliano in the province of Treviso.  This area is home to multiple DOC wines zones, both the Prosecco as well as the lesser known Colli di Conegiliano wines. The origins of wine cultivation in this area date back even prior to the Roman colonization in the 2nd century B.C.

This dramatic growth in popularity of prosecco in recent years has also brought to market many suppliers using the name “prosecco” who are not located in the traditional hill-region that produces the best grapes, and may not adhere to the same quality standards. As happened with the French “champagne” sparkling wine, this dilution of the name ‘prosecco’ has become a bit of a problem, as these lesser quality wines hit the market bearing the same name. In an effort to combat this situation, a new quality designation was created specifically for the sparking wines from the original Conegliano to Valdobbiadene area – the Conegliano Valdobbiadene Prosecco Superiore DOCG (Denominazione di Origine Controllata e Garantita.) This is the highest quality designation for Italian wines. It is more strict than the DOC rating, with lower allowable yields, and an evaluation by a tasting committee before they can be bottled. This DOCG region is comprised of 15 communes, of around 20,000 hectares. The grapes are grown only on the sunny parts of these hills. Right now, only 5,000 hectares of vineyards are entered into the official DOCG register.

Proseccos from the surrounding areas in Veneto and east in the region of Friuli-Venezia Giulia are labeled Prosecco DOC. Proseccos from other regions in Italy are labeled with the IGT designation, indicating more of a table wine, and display a wide range of quality levels.

The original Prosecco region centered around the steep hill of Cartizze. As in all wine varietals, the more challenging the terrain, the better the wines. Forcing the roots to dig deep for nutrients and water produces the best quality grapes for wine production. The Prosecco from the Cartizze area, a small area of 106 hectares in the steepest hills of San Pietro di Barbozza, Santo Stefano and Saccol, is considered to be the best, the “Grand Cru” of Prosecco. These grapes are the last to be harvested, as they are difficult to access. The high quality of the grapes, combined with the lower yields and difficulties with cultivating here all contribute to the higher cost of these wines.

I spent a couple of days driving around this region, searching out a few of the more interesting, smaller producers. Several of our Bike the Wine Roads and walking tours visit the region, and I am always on the lookout for small, high quality producers that are a bit off the beaten track. My first stop was at the very top of Cartizze, along a spine that abuts the hill 400 meters above sea level, home of the Col Vetoraz winery. Prosecco has been grown on this plot of land since 1838 by the Miotto family. In 1993, descendant Francesco Miotto joined forces with Paolo De Bortoli and enologist Loris dall’Acqua to start Col Vetoraz. They are quickly becoming a force to be reckoned with in this region filled with quality producers. The winery was closed on the day of my visit (a Sunday), but I got a chance to enjoy the absolutely amazing panoramic view. I’ve tried their Valdobbiadene Brut Prosecco DOCG, which was a wonderful fresh, intense, dry prosecco – not surprising, given their enviable location. Well worth the climb up the hill! 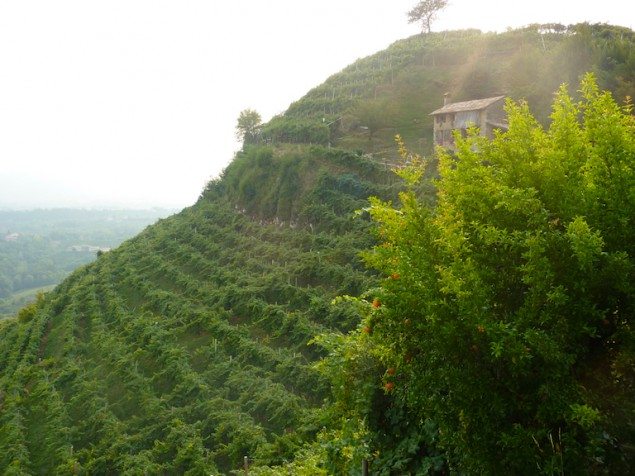 Next stop, Vidor. I was on my way to the Adami Winery. I knew it would be closed on a Sunday, but I had already tasted several of their proseccos and my main objective was to see the location of their facility. Hills are wonderful venues for growing wines, but can be a challenge for some bikers! The Adami production facility is not located at the hilltop, but at the base of the hills. Vidor is south of Valdobbiadene, on the southernmost edge of the wine DOCG region.

Adami was started in 1920, when grandfather Abele purchased the vineyard. Shaped as an amphitheater, and exposed to the south, its shallow calcareous soil is set on the under lying bedrock. Now in the hands of grandsons Armando and Franco, their wonderful wines are exported worldwide. I’ve found them fairly easily in the US, and I’ve tasted both the Garbel, as well as the Bosco di Gica, and enjoyed both.

Nearby, the highlight of my visit awaited. Another winery, this one with a sign saying “Aperto” (open). This was Sunday, so I was quite surprised to see it, and drove in. I had discovered Col di Lupo (Hill of the Wolf), another prosecco winery that had not yet been on my radar. They sell only to private clients, restaurants and agrotourismos. I was greeted warmly by Marco and his lovely wife. They were incredibly patient with my minimal Italian, and chatted with me while I sampled a couple of their wonderful proseccos, an extra-dry and a brut, accompanied by homemade snacks cooked up by Mom – grape focaccia and nice pastry.

The next day I continued to explore, first finding the Merotto winery, located down in Farra di Soligno. Their production facility is down in at the base of the hills, but their vineyards are located in a ring of hills surrounding Col San Martino, an ancient Lombard village north of Treviso. While there, I tasted both the Bareta Brut, as well as their flagship wine, the Cuvee di Fondatore Giovanni Merotto. Both fresh, dry, and flavorful, with a bit more yeast on the palate with the Cuvee. Perfect apertif wines!

My primary reason for being in Italy at this time was our September 2011 Chefs on Bikes tour of the Veneto. On two occasions on that trip, I served a Val d’Oca prosecco to our guest as an aperitif, and we very much enjoyed both of them. I had been passing their vineyards  throughout the region over the last day, the first time being on the way up to Col Vetoraz, where Val d’Oca has vineyards right in prime Cartizze territory.  Val d’Oca is the Cantina Produttori di Valdobbiadene, a consortium of 600 growers who own 614 hectares here in the Prosecco DOC. The Cantina itself is located in Valdobbiadene, but I saw their vineyards throughout the region. We had tried the Val d’Oca Valdobbiadene Superiore di Cartizze DOCG for our welcome aperitif, and the Millesimato Val d’Oca Extra Dry at the start of our risotto cooking class. The owner of the wine store in Mira highly recommended the Cartizze, and it was awarded 5 Grappoli from the Duemilavini in 2010, while the Millesimato walked away with 4 grappoli.