A verbal scolding goes a long way in making healthier food choices. A look at Thug Kitchen.
by Maya Dangerfield 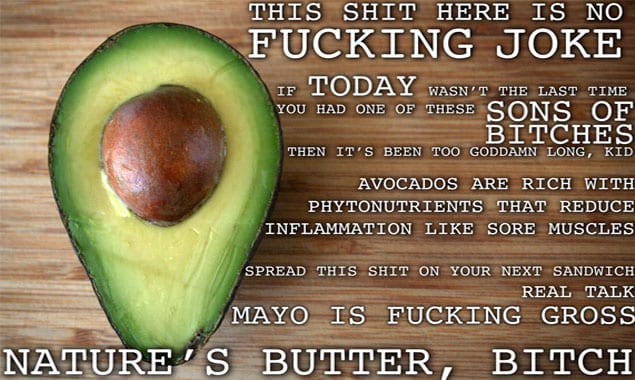 Thug Kitchen’s Mission is simple: Eat healthier, you lazy motherfucker. Thug Kitchen isn’t your typical food blog; rather than cajoling readers with sugary anecdotes about healthy eating, Thug Kitchen subverts the typically soporific vegan food blog with a no-holds bar style that’s both attention-grabbing and refreshing.  Avocados are referred to as ‘nature’s butter, bitch.’  Grapes which “will lower the ever living fuck out of your cholesterol” are lovingly referred to as ‘rotund bastards.’ It’s rife with expletives, sarcasm, and a fair amount of chastisement from a person doubling as a vegan friendly food guru and a no-nonsense personal trainer—it’s Breaking Bad’s Jesse Pinkman armed with a Tumbler account.

Created in 2012, Thug Kitchen is the brainchild of an anonymous plant-eater whose ultimate goal is to help “your narrow dietary minded ass explore some fucking options so that you can look and feel like a fucking champ.”  Since its debut Thug Kitchen has garnered over 500,000 Facebook likes and 50,000 Twitter followers who tune in for sporadic postings of vegan recipes emblazoned with a healthy dose of profanity and good-sense nutrition.

Although the author of Thug Kitchen hasn’t revealed his/her identity (and some publications claim Thug Kitchen is actually the work of a group), the site’s  message inspiring people to eat healthier has garnered the attention of celebrities, foodies, and fans within the culinary world. Thug Kitchen’s no-nonsense and no excuses approach to healthier eating doesn’t mince words about Americans poor dietary choices and rather than couching recipes with the typical health blog pseudo-science and yogi-zen master language, Thug Kitchen offers an unpretentious and somewhat egalitarian outlook toward eating better. Thug Kitchen notes, “ Everyone deserves to feel a part of our country’s push toward a healthier diet, not just people with disposable incomes who speak a certain way. We aim to educate as well as entertain motherfucker.” 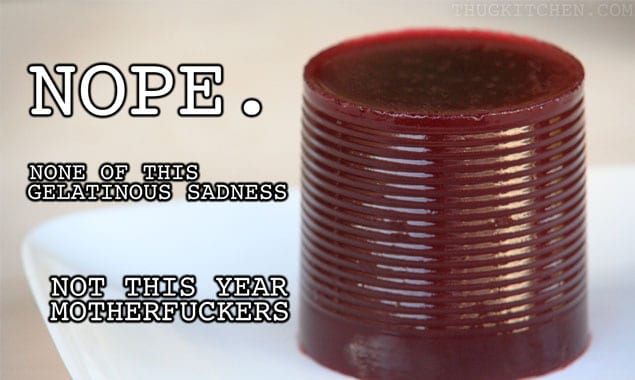 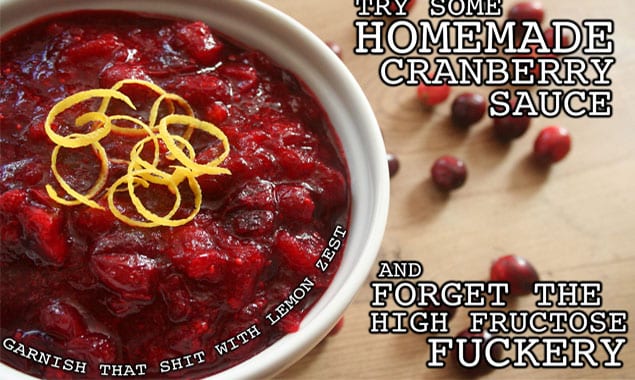 Indeed, Thug Kitchen does exactly what it aims to do—making  healthier food more accessible with posts that are both candid and hilarious. Even the directions are imbued with a frankness that seems to take a page from Luis CK, rather than the typically subdued and polished vegan blogs. Take, for instance, Thug Kitchen’s directions for Auga Fresca:

Toss all that shit in a blender and zap it. Fucking done. Some people strain the blended fruit for pulp, which makes the consistency a bit more watery. Not me, I like some pulp in that shit. Every sip reminds me what I’m drinking isn’t gasoline.  Natural sugar is way better for you than that garbage they put in soda.  No bitch, I don’t “wanta Fanta” go get the fuck on. Shit.

What’s so refreshing about Thug Kitchen is its candor.  It doesn’t espouse a certain lifestyle or alienate meat eaters. Though posts may be swathed in profanity, they offer an accessible and humorous entry to healthier eating with recipes that promote fresh fruits and vegetables over processed foods.  It’s a movement that’s serious about eating better foods but it doesn’t take itself too seriously.  Or as Thug Kitchen  so aptly puts it  “You’re in my house. I’m going to drop some knowledge on your ass.” 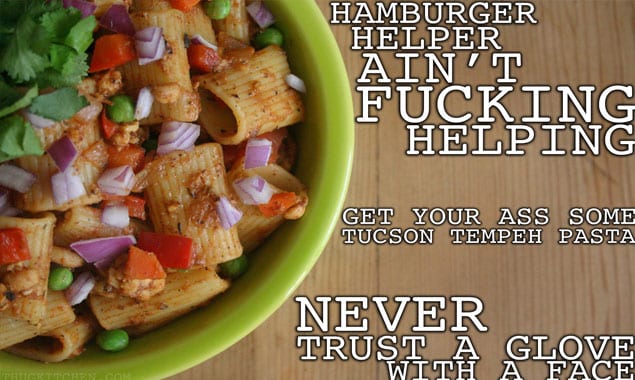 Fifteen Crazy Hot Dogs Across the US

No Frills Thai Food That Packs a Punch—Larb Ubol, NYC