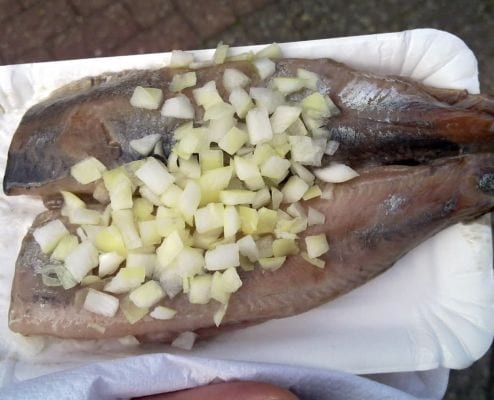 Dutch new herring (maatjesharing) is herring prepared in a specific Dutch way and is seen as a great seasonal delicacy.
By Ena Scheerstra

Dutch new herring (maatjesharing) is the first, young herring of the season fit for consumption.The herring is skinny in the winter, but in the spring it starts to grow because of the higher level of plankton in the water, and will keep getting fatter. In May, when the herring has a fat content of minimal 16 percent, the yearly period in which maatjesharing is fished starts, and will last till the beginning of July. After that, the fish contains too much milt or roe. It can still be eaten but is not as good as new herring, it is used for salted herring, pickled herring or rollmops.

Maatjesharing is prepared in a specific way. It is “gekaakt” (the process of gibbing), in which the gills and intestines are removed, but the pancreas is left. The pancreas excretes specific enzymes that will help the herring to ‘mature’, which is very important for the taste. Then the herring is salted, often for about 5 days. The herring has been frozen before salting for at least 24 hours at at least -45C to kill possible parasites. After salting it is filleted in a specific way: the head is removed, as are all the bones and the skin, but the tail is left on. The tail is often used as a handle to hold the fish when lowering it into your mouth. New herring can be eaten with or without onions, and sometimes it is eaten with pickles or on bread. It has a soft texture, tastes lightly salty and  ripened, and smells fresh. It is usually bought at a market stand and eaten there as a snack, but can also be bought at fishmongers and supermarkets. Foreigners (and even some Netherlanders) often think that this is a weird habit, eating raw fish, but actually the fish is cooked by the salting. If you think eating herring from the tail is a bit to adventurous, the herring salad I give the recipe for is a very nice alternative for eating herring!

In the past, fishermen did not have a freezer. To be able to keep the herring longer and to kill parasites, much more salt was used. The longer the herring was left, the saltier the taste of the herring became, until it was almost inedibly salty after a year.  That was the reason that the coming of the new herring was a big party, it was barely salty and therefore much more tasty. But even nowadays the arrival of new herring is reason for a big party, vlaggetjesdag (flag day), in the port of Scheveningen. The date depends on when the herring is fat enough, this year it was the 9th of June, with the 3th of June as the first day on which herrings were catched.  A few days before vlaggetjesdag, the first casket of herring is sold via auction, the profits are for a charitable organisation. The port and ships are decorated with small flags, hence the name vlaggetjesdag, and there are all sorts of other activities like music and a street fair.

Print
Prep Time
15 mins
Total Time
15 mins
A fresh and spicy herring salad to enjoy herring in another way than from the tail, very nice as an appetizer, entrée or snack.
Author: Ena Scheerstra
Recipe Type: Entree
Serves: 1-2
Ingredients
Instructions
Notes
Instead of Dutch new herrings you can use ordinary soused herring/salted herring (herring prepared the same way, but not from the new herring season; the name depends on the county you live). Can be prepared in advance, store in closed container.
2.2.6