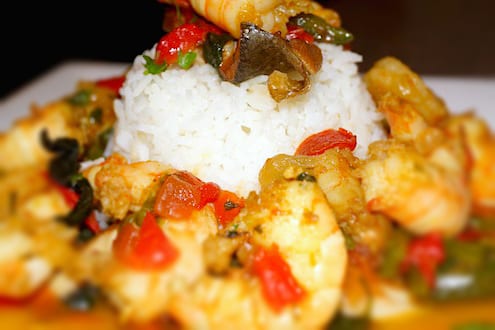 Yollande Tchouapi Deacon, is the founder of Afro Fusion Cuisine,…

Douala Coconut Shrimp Curried is a Central African delicacy, from the coastal region of Douala in Cameroon.
By Yollande Deacon 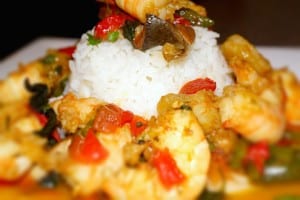 Douala Coconut Shrimp Curried is a Central African delicacy, from the Douala, Sawa people in Cameroon. I am excited to introduce you to a cuisine you may not already know from the coastal province of Cameroon, my homeland. In Douala Cameroon, a tribe of local fishermen called the Sawa have established a vibrant culinary industry and cuisine celebrated in the whole Central Africa region. Thanks to a covered access to the Atlantic ocean, the Sawa cuisine in Cameroon is based on all fresh and natural ingredients brought from the Sea directly to the kitchen. Douala Coconut Shrimp curried is a staple.

Yollande Tchouapi Deacon, is the founder of Afro Fusion Cuisine, a trusted passport to explore Central Africa culinary beauties. She is a cookbook author, African Chef and contributor to two foreign online lifestyle magazines including Goducamer in Cameroon and MamaMag in France.