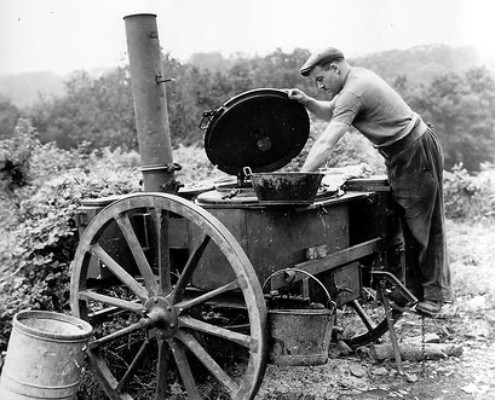 Carrot and Orange Juice with Mint and Honey

At the turn of the 20th century, the modern mobile field kitchen for use in theaters of war was invented. German soldiers during World War I quickly dubbed it Die Gulaschkanone.
By Steen Hanssen

In the city of Idar-Oberstein in the Rhineland-Palatinate, Herr Karl Rudolf Fissler, at the turn of the century, invented the modern mobile field kitchen for use in theaters of war. German soldiers during World War I (WWI) quickly dubbed it: Die Gulaschkanone (goulash cannon). The “cannon” part of the nickname is due to the mobile kitchens close resemblance to an artillery piece when disassembled and towed behind a horse or motor vehicle with it’s long chimney tilted and posing as a cannon barrel. The “goulash” part is derived from the iconic Hungarian dish which was prepared on the mobile field kitchen. Other dishes included a wide variety of soups, with whatever was available, often dried vegetables such as peas, lentils and beans due to their low dry weight (cost effective transportation).

The goulash cannon was designed to function as a large pressure cooker ideal for quick cooking and stewing using limited amounts of energy and could operate on fire wood, coal, oil or whatever combustible material available. The key point being durability, flexibility and multi-functionality, thus the goulash cannon was also used to prepare hot beverages such as tea, coffee, Glühwein (hot wine with spices) or to roast edible chestnuts, bake bread or even cook Knödel. I’m quite sure that the goulash served in the trenches wouldn’t have been worthy an Honest Cooking recipe, if containing meat at all, best option would have been killed horses, donkeys, dogs or rats, most likely the doomed soldiers wouldn’t have gotten much protein at all before they themselves became butchered.

In Erich Paul Remark’s monumental novel “Im Westen nichts Neues” (All Quiet on the Western Front) depicting the dehumanizing experience of WWI’s trench style warfare, there’s an opening scene in which the young soldiers one day finally became properly fed, but only because they received double portion caused by the loss of half their company that day without anyone notifying the army cook managing his goulash cannon battle station. The novel further describes how the bravery of the Feldkoch (army cook) is measured in how close to the front line he dares set up shop.

Today the Gulaschkanone is also used by fire departments and humanitarian organizations such as the Red Cross to provide warm food and beverage to large crowds. In Germany it’s actually become somewhat of a cult item popping up at rock festivals and concerts serving cheap soups and goulash. There’s even an old goulash cannon in full operation at the Wednesday and Friday market at Wittenbergplatz near my hood in the heart of old West Berlin.