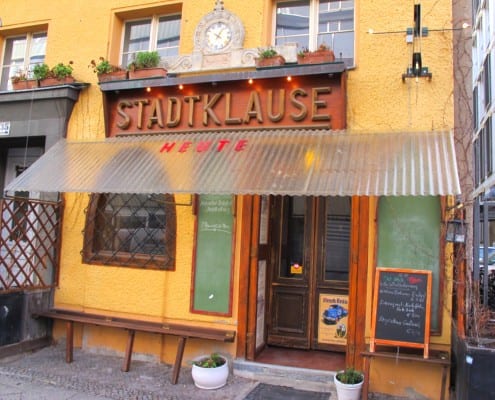 In the rather inconspicuous looking Bernburger Str. 35 in Kreuzberg, a stone throw away from the sad remains of the once magnificent Anhalter Bahnhof and just an eight minute walk from Potsdamer Platz, lies a Berliner gem called Die Stadtklause. It’s mostly a beer Kneipe (German pub) but also functions as a popular and busy lunch venue offering traditional old school Berliner cuisine, cozy ambiance and fascinating history.

potatoes and cabbage. To put it simply, it’s honest cooking and Germans refer to it as “Hausmannskost” comfort food that leaves you with a full belly and a smile on your face. This type of venue and menu is increasingly becoming a rare sight in Berlin, with fancy concept restaurants, celebrity chefs and a vibrant mushrooming street food scene currently the dominating trends.

I’m having lunch at Die Stadtklause every possible Wednesday (for almost a year now) and absolutely enjoy the food as well as the friendly historic atmosphere, with old photographs, dark wooden furnishing and even a real fireplace. Most of the lunch crowd are local Berliners working nearby, and when they walk in they’ll shout out “Mahlzeit!” which is a German salutation meaning “meal-time” used only in the context of lunch with co-workers.

You may choose between two daily lunch dishes: normally a stew or soup with a slice of home made bread and something with pork and potatoes/cabbage. Amazingly the food is always delicious, especially during the cold winter season. This week the menu includes:

After lunch Die Stadtklause turns into a more traditional Kneipe and watering hole with a an interesting history: The late Bruno S. an artist, actor and street musician spent his last years performing in Die Stadtklause. He was a true Berliner original and starred in two movies directed by the brilliant German auteur Werner Herzog (“The Enigma of Kaspar Hauser” & “Stroszek”) Bruno S., abandoned as a baby to an orphanage, spent his youth in mental institutions during the Nazi era. He later taught himself to play the accordion and the glockenspiel. In the 70ties Bruno S. became somewhat of a cult figure and celebrity for German intellectuals and artists before slipping into obscurity and forgottenness living the rest of his life performing on the streets of Berlin before passing away in 2010. A couple years ago The New York Times ran a story about Bruno S and his performances in Die Stadtklause.

Should you find yourself at Potsdammer Platz during lunch time, don’t cheat yourself for a genuine taste of old school Berlin cuisine and authentic atmosphere at Die Stadtklause.