Though a bit surprised, Bill finds a tasty direct trade coffee at Target.
By Bill Walsh 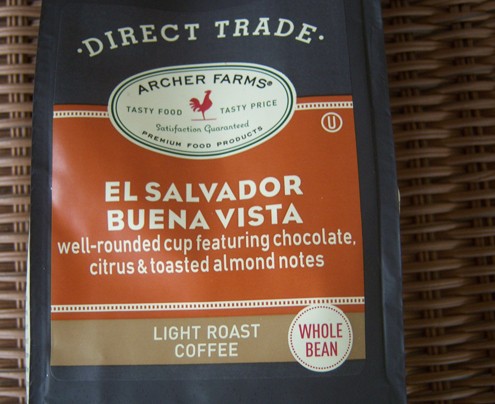 The concept of well-roasted coffee obtained through socially responsible methods is something that is not new to the coffee world. Yet this concept was all but unreachable to retail giants until recently, when Target became one of the first to take the dive into the small niche market of quality, direct trade coffee. Archer Farms, Target’s food brand, recently began offering Direct Trade coffee of varying roast levels. Shortly after they began offering said coffees, they sent me out two varieties to try and here’s what I thought of the first.

Contrary to my fears, Target’s El Salvador did not arrive stale but actually pretty close to the date of roasting. Getting straight to the punch line, I brewed up the coffee in the usual three methods of french press, drip and siphon.

The drip delivered notes of wheat grass, maple bacon, elderflower, a little ginger and oats within a subtle, medium body.

The french press held similar flavors, with the wheat grass and elderflower dominating the ginger and oats. And while there was also a smacking of maple syrup, bacon did not show up here in this medium bodied pressed brew.

The siphon brought back the maple bacon, along with elderflower, wheat grass and oats in a medium body.

I was about to proclaim this a fairly superb coffee when an opportunity arose for me to obtain a bag of this coffee from my local Target. Alas, it was too good to be true, as I was let down with the coffees freshness in this purchased bag. Sure some of the flavors glided through, but the bean age really obscured a lot of the good flavors.

Thus, it seems the problems of mass production still keep quality, fresh coffee from stores like Target. BUT, if you are a person that only buys their coffee at massive stores, definitely try out Archer Farm’s Direct Trade coffee (whole bean only). Amidst the lesser options on the adjoining racks, at least there’s a good chance you’ll get some good coffee.

note: coffee was provided free of charge and the above review is objective feedback.