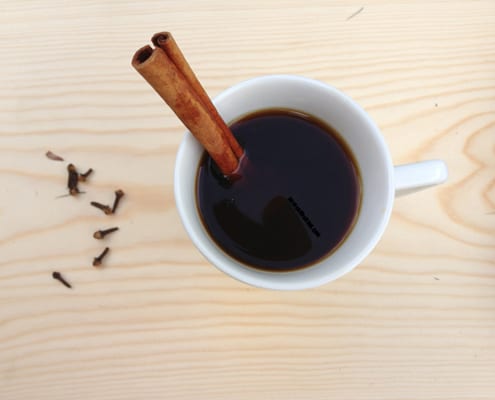 Coconut Cake with Rosewater and Jam

Try this Danish-inspired coffee cocktail that’s spicy and not too sweet on a brisk autumn night.
By Bill Walsh

These days, a growing number of folks know that a well-roasted batch of coffee needs nothing added to it in order to make it delicious. This fact seems to ring true amongst the people of Denmark and their ever-blossoming coffee scene, home to such entities as the Coffee Collective and Sigfreds Kaffebar.

But like all cultures, every culture seems to have at least one coffee recipe that involves a litany of other ingredients to compliment (at best) or mask (at worst) the coffee. In leading up to the North Festival Oct 2 – 7 in New York City, since I couldn’t make it over to Denmark to grab a bag of quality Danish beans or sample their cafe culture, I sought to find a coffee recipe that gave a solid (as possible) nod to the Danes and their coffee.

Thus after some research, two coffee cocktails emerged, and of the two I went with the one more commonly found and that seemed similar to other coffee recipes in the geographical neighborhood. Named simply ‘Danish Coffee’, it’s definitely a perfect drink for a brisk autumn day, even without the rum.

A couple things I would note:

Coconut Cake with Rosewater and Jam