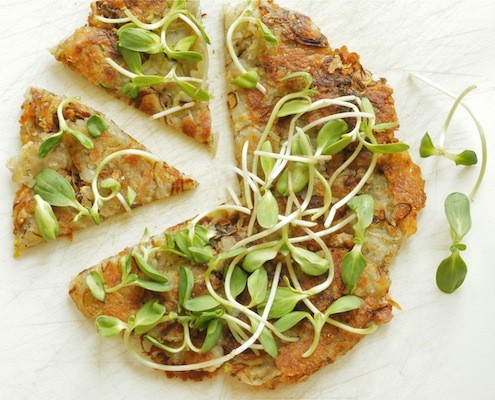 Who doesn’t like crisped potatoes and leeks sliced in a pancake round?
Text And Photo By Sarah Kenney

Whenever I reminisce about our very first trip to France as a newly married couple, I remember this one treat.  It was in the tiny little village of Pérouges.  The treat was a doughy pancake the size of a pizza that was brushed with butter and sprinkled with snowy powdered sugar.  It was called “Galette de Perouges”.  Researching the trip, I saw a photo of this galette in a travel magazine.  Unbelievably, the photo from the magazine materialized right in front of us when we found the exact shop with a big delicious galette in the window.  How often does that happen?  Travel can be so sweet in this way.  Pun intended!

Now, every time I see or hear the word “Galette” I stop and pay attention.  Recently, this recipe for a savory galette caught my eye.  I made it as an appetizer and it  was delicious.  Who doesn’t like crisped potatoes and leeks sliced in a pancake round?  The potatoes crisp up nicely on the outside but still have that soft texture like a french fry in the middle.  The leeks cook right in with the potatoes and the pairing is savory and filling. 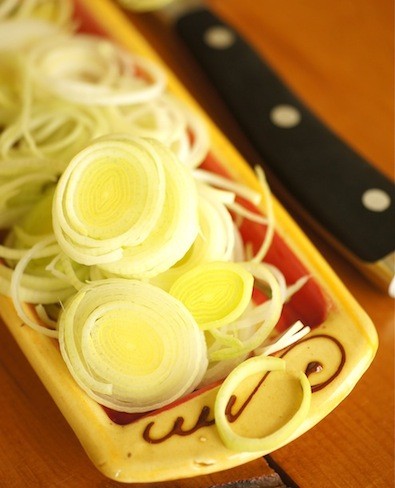 My biggest piece of advice making this is to be sure (REALLY SURE) that you use a  non-stick pan.   I took a risk and thought I could flip the galette easily enough with my regular pan.  Not a good move.  You need a non-stick pan or everything could flop right onto the countertop in pieces.  Trust me.  I know and want to save you the kitchen misery.

This would make a great appetizer for a small group. Its a nice little savory to cut into wedges for a party.  The colors are pleasing but the aroma is what is enticing. I couldn’t find watercress that day but I did find pretty and nutritious alfalfa sprouts to sprinkle on top.
Enjoy!