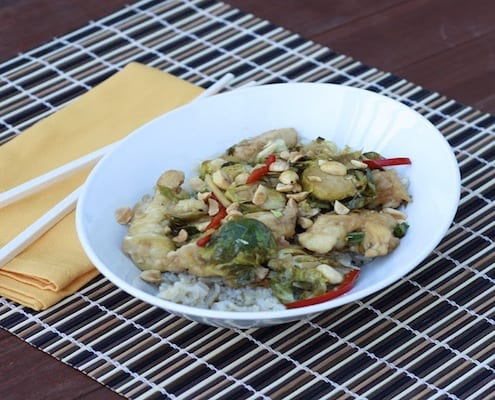 Sometimes I make a meal and ask myself, “why don’t I do this more often?”. Today, this = stir fry. Stir fries come together quickly, don’t mess up a ton of dishes (relatively speaking), and are usually pretty healthy. This stir fry was a little bit more involved since it involved coating the chicken in an egg and cornstarch mixture before sautéing, but even that extra step wasn’t too time-consuming.

We really liked this. It definitely lived up to its name, but it wasn’t so spicy that we were running for glasses of milk. The fresh ginger was a great addition to the stir fry and if you aren’t a fan of Brussels sprouts, have no fear, they completely take on the flavor of the sauce and you don’t even realize what you’re eating. That being said, you could always opt to swap them out in favor of some other vegetables.

With the exception of the Brussels sprouts, I had everything already on hand for this meal…and I’m willing to bet you have most of it too! Spice up your regular stir fry and give this one a try.