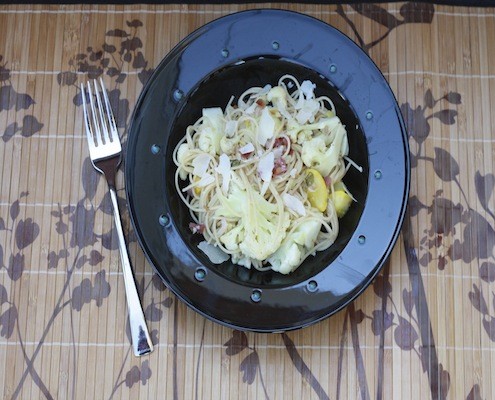 I didn’t actually expect anything to come up when I googled “Cauliflower Pasta”. I’ve never had cauliflower in pasta before nor have I ever even seen cauliflower pasta, but I was grasping for straws trying to come up with something to eat based on the ingredients we had on hand. Real Simple magazine came to the rescue with this pasta recipe that came together in a flash. With only a handful of ingredients, I managed to have them all in my rather empty refrigerator and pantry. I was a little concerned it would be too boring of a dish, but Ryan and I both liked it. The best part was definitely the cheese, and I’m pretty sure I added more than the 3/4 cup it called for…I recommend you don’t skimp either! (Note–I also added some yellow squash I had on hand, which you might see in the picture. I just sauteed it before adding the cauliflower)

Pasta with Bacon and Cauliflower