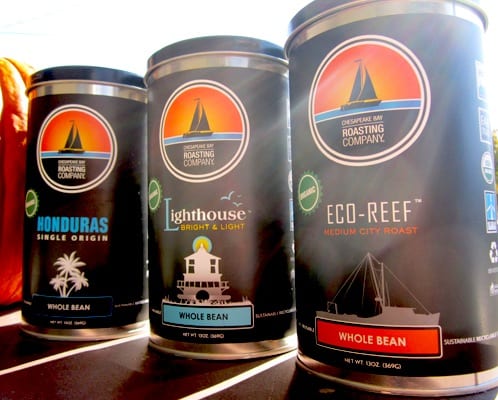 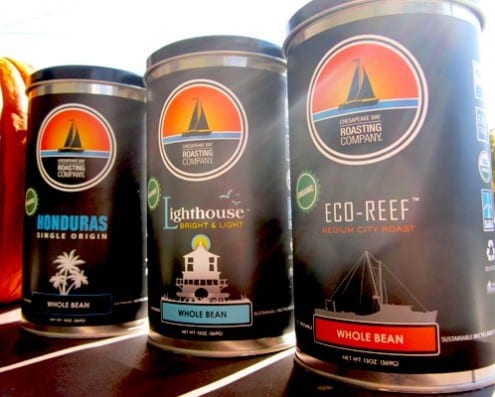 A few years back, I heard about some coffee roasters turning from the widely-used paper/plastic bag to the age-old packaging of a coffee can. The reasoning was that the can was more sustainable and if outfitted with a CO2 valve, it kept the coffee just a fresh. Oddly, the trend never seemed to catch on (possibly because of the association coffee cans hold in the American psyche) and cans all but disappeared from microroasters.

But a few roasting operations went with the can and seem to be doing well with it. One such operation is Chesapeake Bay Coffee Roasting Company, a roaster based out of Maryland who recently sent three of their coffees to be reviewed. Their Honduras SO, Lighthouse and Eco-Reef I sampled via pourover, french press and siphon.

Starting off with the lightest roast, I took the Lighthouse for a spin. The pourover produced notes of milk chocolate, cream, slight ginger, apple skin and a little salty beef broth; a sweet chocolate cream with a touch of savory. The french press doled out chocolate milk, Life cereal, apple skin, anise and some malt with a medium body, proving sweet but a bit of rind. The siphon delivered notes of chocolate milk, pungent Life cereal, malty, oregano and apple skin; a medium-bodied brew with a nice cocoa and wheat quality. All in all, a coffee full of delicious notes of chocolate and sweet cereal with a few dark (occasionally akaline) undertones that were subtle enough to not offset the positives.

The Honduras, proving a touch darker, went next. Via pourover, the coffee emerged with a noticeable smokiness along with fig, slight vanilla and paper, eliciting a sweet, carbony brew. The french press proved less smoky, with notes of corn chip, vanilla, toffee and a little grape jelly, with but only a touch of smoke on the back end. The siphon was an average of the two prior, with notes of vanilla, tobacco, paper, toffee and a little corn, establishing this Honduran as pleasantly sweet coffee with a little too much smokiness.

The darkest of the three, the Eco-Reef finished off. The pourover trumpeted out pipe tobacco, apple, peanut, prune and a little cracker; a sweet and strongly smoky coffee with a medium body. The french press delivered a similar cup, with pipe smoke, apple, peanuts, cracker, oregano and touch of milk chocolate. The siphon proved the most intense in flavor, with strong notes of tobacco, caramel, cracker, cream and clove.

While I enjoyed the Lighthouse a good bit, I liked the Honduras or Eco-Reef less, mostly due to their darker/smoky aspects (though if you’re a fan of darker coffee, these might be the cans for you). Thus, depending on what you’re looking for in a coffee, try out the Chesapeake Bay Coffee Roasting Company.