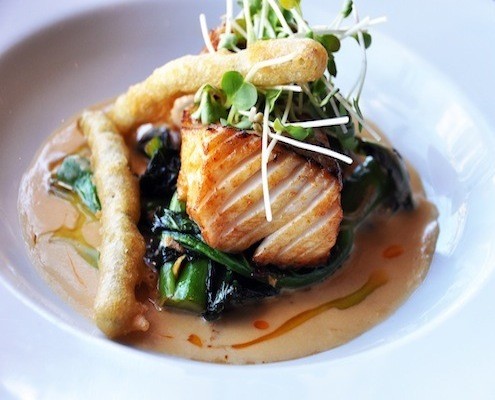 Cannelloni – A Series of Tubes

Brenda Benoit visits the China Grill in Miami Beach, and is taken on a culinary roller coaster ride.
By Brenda Benoit 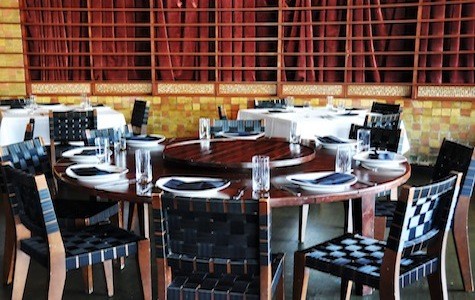 I am not the sort to pursue last-minute, thrill-seeking food adventures but I did have a massive craving for food that was out of the ordinary. I asked my Significant Eater, Mr. H., to please accompany me to China Grill, an Asian-inspired World Cuisine and Sushi restaurant. I did not want to go alone… We got there early on a Thursday for lunch and the place was quiet and peaceful, the lunch crowd having not arrived yet. The mood was tranquil and mellow and the surroundings were perfect for sampling a series of dishes that were presented by Bradford and Frank, our most cordial waiters, and the General Manager, Kevin Amiott.

To begin with, we were offered Saketinis: martinis made with sake, a touch of vodka and fruit juices. We had the Lychee, Watermelon and Spice variations and believe  me, these drinks made an impression on us. Most memorable was the Spicy Saketini, a concoction made with passion fruit with a slice of  jalapeño pepper floating in it, like a lifeboat in the middle of an orange passion fruit sea. And hold on to that lifeboat we did, with a mixture of both pleasure and pain as the heat of the jalapeño hit our tongues with intense fierceness and then…the passion fruit soothed our palate with a gentle sweetness. Each sip brought this sensation back to life every time. All I can say is that it was really something else indeed.

So now after all these intense sensations, we needed something gentler in order to relieve the rollercoaster ride we gave our tongue. The taste of the Crackling Calamari Salad was the perfect remedy for our over-stimulated taste buds: Crispy wok-fried calamari enveloped in an ocean of greens all mixed in with a lime-miso dressing.

Dumplings are one of my weaknesses, as I can eat these packets of goodness all day. The spicy beef and scallion was an interesting take on this dish. By interesting I mean that the garnish in the middle was actually kimchee , fermented vegetables, an unsual addition. The kimchee coupled with the ginger-soy sauce, made the sauce a little too salty for my taste. The dumplings had a really nice flavor but I did avoid the sauce in order not to elevate my blood pressure.

Mr. H. and I devoured the Grilled Szechuan Beef  which was grilled to perfection. The beef was flawlessly seasoned with sake, soy, spicy shallots & cilantro. The steak was sweet and tender and served with a colossal amount of matchstick fries which were drizzled with a combination of Sundried tomato  & Chinese mustard vinaigrette and a snow of black sesame seeds.

The sides were very original: Lobster Mashed Potato and Five Vegetable Fried Rice. Who combines lobster with mashed potatoes? Whoever came up with the idea is a genius as the flavor was uniquely delicious. The fried rice was richly savory with tiny morsels of vegetables that included broccoli, carrots and green onions among others.

The Curry Miso Black Cod was a beautiful dish to behold: the cod wonderfully flaky topped with micro-greens and tempura veggies as a garnish. I was not too keen on the sweet soy glazed Chinese broccoli as I though that it could have been a tad bit more tender. The yuzu-miso butter sauce was divine and delicate though.

Dessert was a surprise: a golden-brown tower made of pastry with a creamy-crown made of whipped cream with a touch of shaved chocolate. What was inside? How do we eat this?

“What is this called?”, we asked Frank, one of our waiters.  Banana in a Box, he said.

“How are we supposed to eat it?”  Let me show you, he said with a wide grin.

Frank took the banana box and laid it down on the plate and proceeded to perform surgery on it with two spoons. Out came the aromatic filling and seriously captivating aroma of bananas, cinnamon and chocolate enveloped in a dreamy caramel cream. “Oh dear, is this for real?” I asked Mr. H. , who was too busy eating to even give me an answer.

Bradford, another one of our waiters, carefully explained each offering to us and was very gracious.

Servings were huge so I grabbed them to take home before Mr. H. beat me to it and shared them with my kids. The big hit was the Lobster Mashed potato of course. Visiting China Grill was quite an experience. This World-inspired cuisine has a heavy Asian influence which makes the choice of dishes captivating. To live in a city that is such a mix of cultures is a gift. To get to taste these cultures on a plate is priceless. China Grill has a saying : “be attentive, be thoughtful, be accountable, be gutsy “, and that they certainly are.