Topped with a bold green chutney, cheese, chicken tikka, arugula and red pepper flakes, this naan pizza is a delicious twist that is easy to create.
By Soma Rathore 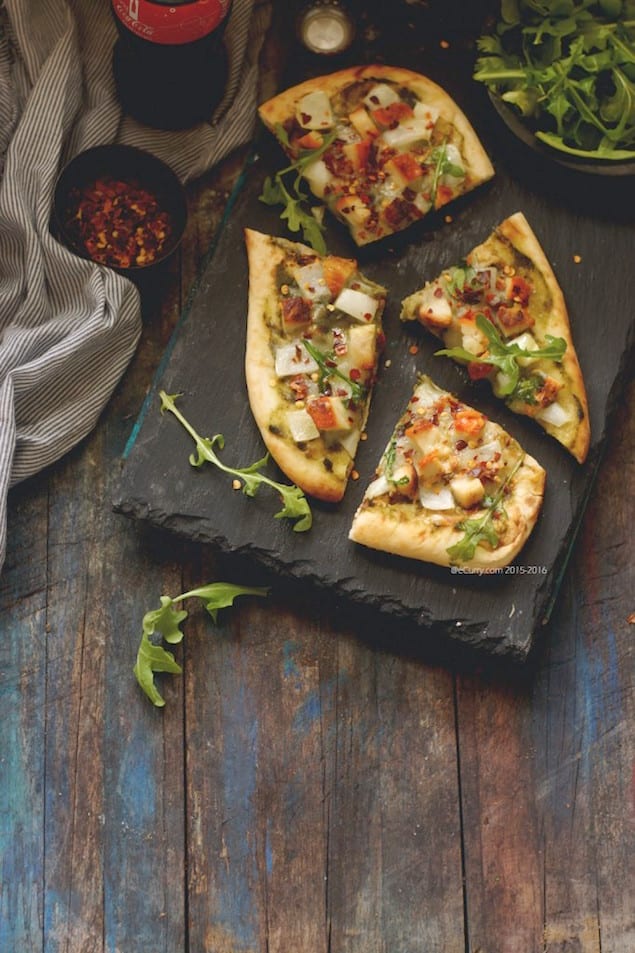 It needs no describing that this is an Indian flavored pizza. Nothing new or original. Naan pizzas are everywhere. Or are they called “Naanizza”? How often do you make a pizza with the bold Indian “green chutney” ? 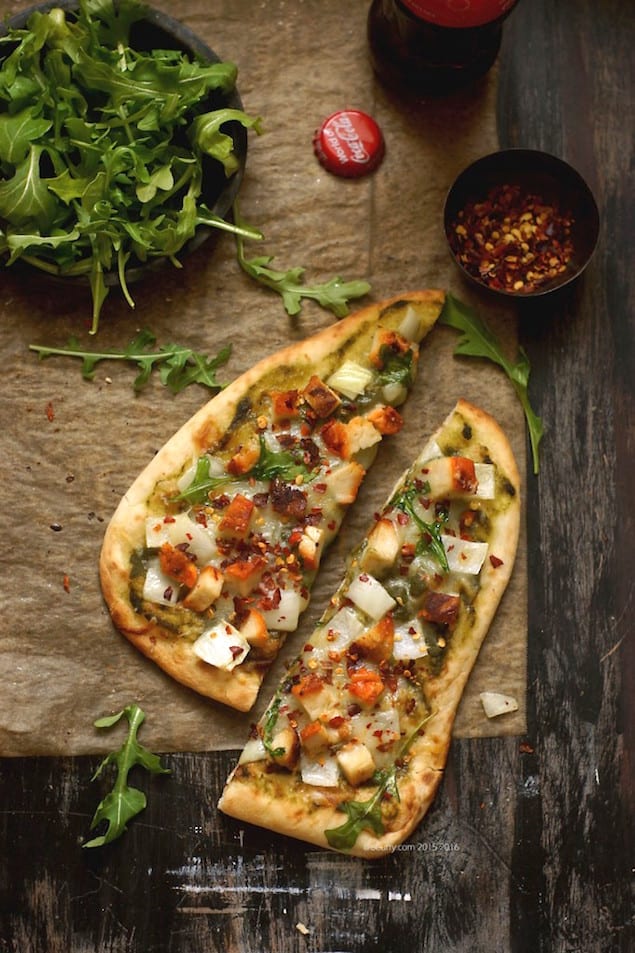 You cannot beat the convenience. Naan makes way better crust than the pre-made pizza bases found on the store shelves. It has the right rise, and texture and even if you are going to use store bought Naan which have been frozen, you still end up having a perfect pizza. The fact is that Naan is made in the Tandoor, and that is what makes it closest to the fresh brick oven pizzas. If you happen to have leftover homemade Naan, you can make this a totally homemade affair.

Naan pizzas are also multifaceted. With only a change of topping,everything changes. They can be served in different occasions without much trouble: breakfast, brunch, a rushed lunch, a quick weeknight dinner paired with a salad, an appetizer which bakes in less than fifteen minutes, game night servings, sumptuous after school snack that the kids wait for and so much more…

I have used coriander and mint chutney, aka green chutney today instead of the Italian tomato sauce, some cheese of course (though it can be done totally without!), topped it with onions and the Indian Chicken Tikka. No, not the “tikka masala” kind of chicken but the spiced and grilled bites or tikka, that I already had made the night before. Garnished with fresh baby spinach and arugula and crushed red pepper of course, it was the most delightful lunch and the kids indulged on their after school snack.

Get the recipe for the chutney here.

Get the recipe for the chicken tikka here.

Print
Topped with a bold green chutney, cheese, chicken tikka, arugula and red pepper flakes, this naan pizza is a delicious twist that is easy to create.
Author: Soma Rathore
Recipe Type: Main
Cuisine: Indian Inspired
Serves: 1 pizza
Ingredients
Instructions
Notes
There are unlimited ways to make this pizza the way you like. I have only mentioned what I have used. Use your own topping and your favorite herbs, and cheese. The proportions are approximate and may be adjusted to personal taste.
3.2.2885

The Story of a Candy Farmer