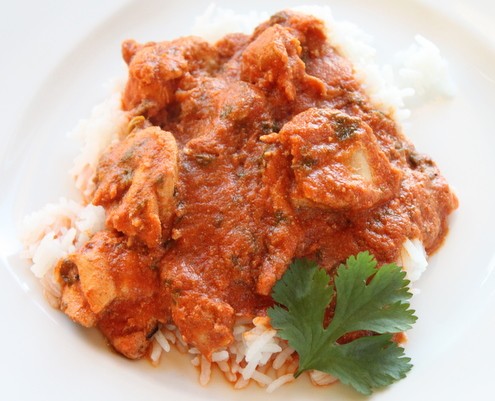 Some call it Britain’s national dish, and that’s just fine with us. As long as Kelsey Hilts’ son likes it, we’re onboard.
By Kelsey Hilts

Tikka Masala is a popular Indian curry dish that can be ordered in restaurants around the globe.  The actual origins are disputed, some people claiming it comes from India and others saying that it was created in an Indian restaurant in London.  Regardless of its origin, however, it is so popular in England that it is sometimes considered Britain’s national dish.

Chunks of chicken (or other meats) are marinated in yogurt and spices and then baked in a tandoor oven.  The yogurt helps to tenderize the meat.  For those of us without a tandoor oven, skewering the meat and cooking it on the BBQ is a great alternative.

Over the past couple of years my family has made tikka masala many times in an effort to perfect it.  It typically has heavy cream so our goal has been to create a lighter version while matching restaurant creaminess and flavor.  We have tried using full cream, fat-free “half and half,” and regular “half and half.”  The full cream version is really rich. It’d be fine for a splurge but because we like to make this dish so often, the full cream makes us feel guilty.  The fat-free stuff is too watery and leaves us unsatisfied.  Our favorite rendition by far has been with the regular “half and half” because it has the texture and taste that we are after.

One of the best things about this dish is that my 2 1/2-year old son can’t get enough of it, even when we make it extra spicy.  This has been one of his favorite meals ever since he started eating solid foods.  And what’s not to love about your toddler licking his plate, especially when the meal involves tomatoes, peppers, garlic, spices and more.

Slide the chicken cubes off of the skewers and transfer them to the sauce that has been cooking on the stovetop.  (The chicken does not need to be cooked completely at this point because it will continue to cook in the sauce.)

1+ jalapeño pepper, finely chopped, depending on your spice preference

Melt the butter in a pan over medium heat.  Add the minced garlic and chopped jalapeño pepper and sauté them for 1 minute.  Stir in the remaining ingredients and simmer for about 20 minutes.  Add the cooked chicken pieces and let everything simmer for an additional 10 minutes or until the chicken is completely cooked.

Serve the tikka masala over steamed rice with naan.