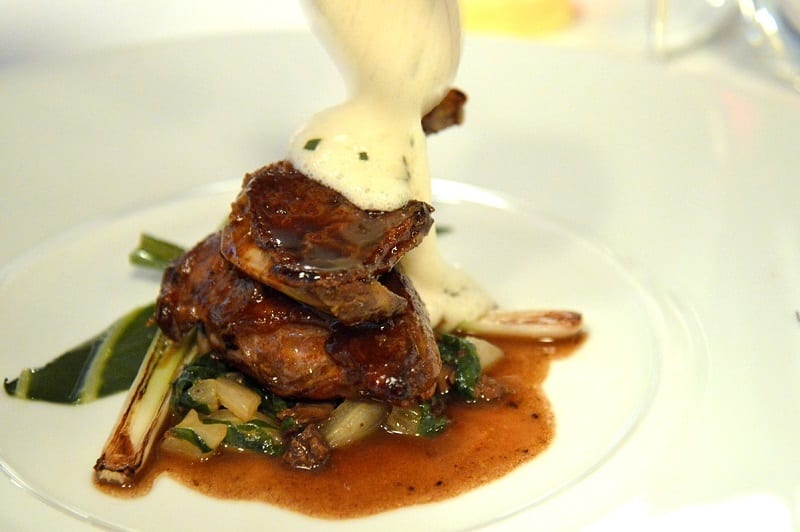 Chef Pierre Gagnaire is known for his inventive fusion cooking and has over fourteen restaurants worldwide. He began in St. Etienne where he won three Michelin stars to begin his illustrious career. Consistently placing in top restaurant awards, and now with several more Michelin stars and restaurants, I was delighted to experience his concept and his executive Chef Roel Lintermans’ creativity and execution of service at Les Solistes by Pierre Gagnaire at Waldorf Astoria Berlin. The restaurant is the perfect pairing of this master of restaurant concepts, who has the flagship Restaurant Pierre Gagnaire on the Rue Balzac in Paris and other restaurants worldwide, and a star chef in his own right, Belgian Chef Roel Lintermans.

Walk into the sumptuous lobby of Waldorf Astoria Berlin and step onto the winding white staircase, deliciously lit to create art in itself. As you make your way up the stairs to the restaurant entry your expectations are elevated with each step. I was not disappointed as Chef Roel Lintermans’ special pairing menu was inspiring. True to Pierre Gagnaire’s concept of an unpretentious kitchen offering a playful combination of foods, Chef Lintermans’ kitchen delivered with a painterly presentation of plates.

Chef Lintermans has had full charge of the kitchen as Executive Chef of Les Solistes while Chef Pierre Gagnaire designs for the culinary concept and menus. In November 2013, just one year after the opening, Les Solistes at Waldorf Astoria Berlin was awarded its first Michelin star and Chef Lintermans, who was voted ‘Berlin Master Chef 2014’, commented: “This award is a great honor for the entire restaurant team and a compliment on our daily work!” Lintermans’ team members were specially trained in Gagnaire’s three-star Paris restaurant for the predominantly French cuisine served in Les Solistes.

Waldorf Astoria Berlin General Manager Gregor Andréewitch appreciates what an asset this restaurant is, “With Roel Lintermans, we have the persona and skills of an outstanding chef. His expertise in the haute cuisine and in the collaboration with Pierre Gagnaire has been proven over a period of many years. The elegance and standard of the creations produced by the restaurant team are in keeping with that of a Waldorf Astoria hotel.” he says.

It is hard to choose a favorite taste or course because they are all so imaginative and unique. Chef changes the menu seasonally and daily according to market offerings. So I went with the wine I liked best; a glass of an incredibly special Egly Ouriet Grand Cru Brut Tradition champagne that blew me away paired with Cod with shellfish jus and grilled leek, Brandade with cauliflower. Sommelier Mr. Brandweiner informed me that he buys all the Egly Ouriet Grand Cru Brut Tradition that is produced so if you’d like to try it, you must come to Les Solistes by Pierre Gagnaire.

We had a lovely surprise for dessert- well many surprises. Pierre Gagnaire loves to dazzle his guests with dessert and here it is called the Grand Dessert, a combination of five desserts offered in two services paired with a beautiful 2011 Oremus Tokaj Szamorodny. We followed with a table-side tea service that was exceptional, and prepared gracefully by the Restaurant Manager Carolin Grosch.

I am grateful to Chef Lintermans at Les Solistes By Pierre Gagnaire at Waldorf Astoria Berlin to be able to share with you chef’s recipe for the entire flavorful pigeon course I enjoyed presented with potato foam, baby Paris button mushrooms, iced cream of melon and sweet onion gel with green curry. I suggest for the home cook that a Cornish Game hen might be used in the place of pigeon. Forgo the potato foam and puree some cooked, mashed new potatoes. Pair as they did with a 2013 L’esprit de l’horizon rouge from Domaine de l’horizon or a lush pinot noir from the Ribbon Ridge area of the Willamette Valley. Here in original measurements is the course. 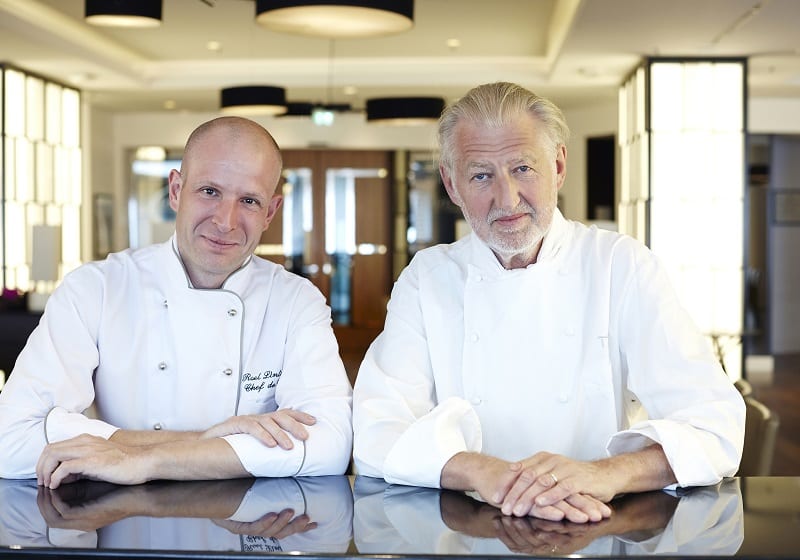