Mehan Dossani is the creator of the food blog Mehan's…

Thinly sliced rib eye, sauteed onions and bell peppers, loads of cheese, stuffed between sourdough bread toasted on a hot panini press until the cheese is oozing out.
By Mehan Dossani 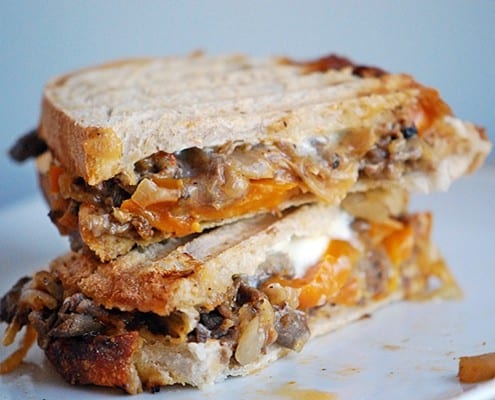 Thinly sliced rib eye, sauteed onions and bell peppers, loads of cheese, stuffed between sourdough bread toasted on a hot panini press until the cheese is oozing out.  Sounds like a good lunch, no?  If you have an international market near you, try and find some thinly sliced rib eye, Sukiyaki or Shabu Shabu meat – they are both perfect for sauteing up on a cast iron skillet for a panino version of a cheese steak.

Cheese steak panini, serves 4
1 lb thinly sliced rib eye
1 large onion (sliced)
1 yellow or orange bell pepper (I used orange)
1 T paprika
1 t garlic powder
1 t cayenne pepper
1 t black pepper
salt, to taste
1 T cream cheese
3/4 cup shredded cheese (sharp cheddar or provolone)
french rolls or sourdough bread
Heat about a tablespoon of grape seed or other oil along with a tablespoon of butter in a medium cast iron skillet on medium high heat.  Start sauteeing onions, once they have soften add bell peppers.  Salt.  Add spices and stir.  Cook until brown and nearly caramelized.  Remove vegetables into a bowl.  Next, brown the meat by placing a few (about 4-5) slices on the skillet and flipping over after a few seconds and salting slightly along the way.  Don’t crowd or allow the slices of meat to overlap.  Keep removing browned meat, adding fresh slices and repeating.  Once all the meat is cooked, add one tablespoon of butter to pan and dump meat, onions and peppers back into pan.  Add cream cheese and allow to melt.  Turn off stove, add shredded cheese and stir.  Either toast up a sub and add filling, or place between two slices of sourdough and toast up on a panini press (adding more cheese if desired).

Mehan Dossani is the creator of the food blog Mehan's Kitchen, where she writes about her passion for spending time in the kitchen, cooking and entertaining for those she loves. She is also constantly learning as much as she can from her favorite home cook, her mother.