Featured, Interviews
May 2, 2014
by Sheila McGrory-Klyza
0

Very few American cities can claim to not have a McDonald’s within their limits, but Burlington, Vermont, is now one of them. After an inspired renovation, The Farmhouse Tap & Grill opened up in repurposed McDonald’s to fanfare that hasn’t stopped since.
By Sheila McGrory-Klyza

Few American cities can claim to having no McDonald’s within their limits, but Burlington, Vermont, is one of them. A while back a Golden Arches did exist downtown, but in an unusual turn of events, it quietly closed its doors. After an inspired renovation, The Farmhouse Tap & Grill opened up four years ago in its place to fanfare that hasn’t stopped since. 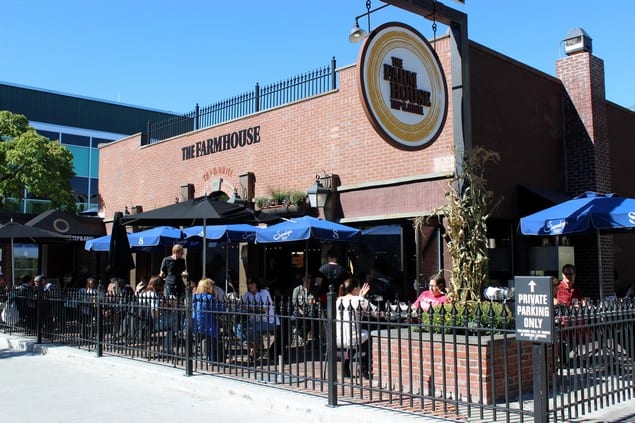 Instead of dubious “special sauce,” there’s housemade kimchi; instead of precut, frozen hamburger patties, there are burgers made from a custom blend of local grassfed beef that the chefs grind themselves. The Farmhouse, as it’s affectionately known by locals, is in every way a Bizarro McDonald’s experience. 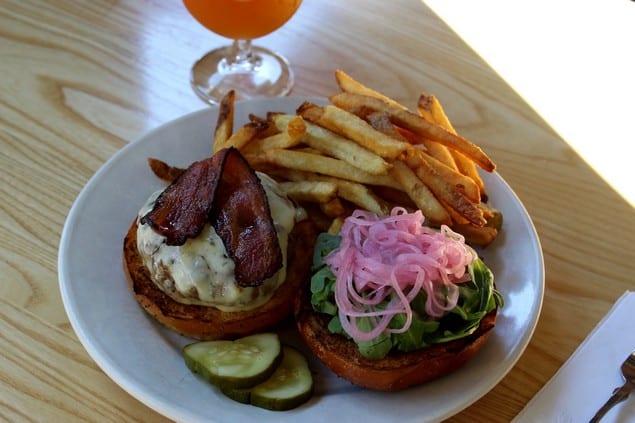 If you look closely at the restaurant’s boxy architecture, you can still see evidence of its fast food history. But aside from the main structure, not much remains from the original building. “It was basically a gut job,” says Executive Chef Phillip Clayton. He points out the uniform orange bricks under our feet. They’re unmistakably McDonald’s-esque, but practically everything else was handcrafted by locals—from the reclaimed barn board on the walls, to the Vermont ash tables, to the copper light fixtures, to the granite bar. “We used as many repurposed elements as we could,” Clayton explains, “done by people who live and work around here.” In the kitchen, two walk-in coolers are original, but a freezer in the basement was converted into another cooler. Unlike Mickey-D’s, the Farmhouse has no need for a freezer. 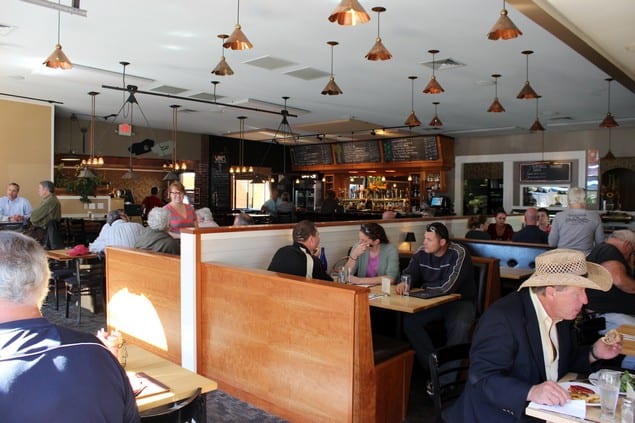 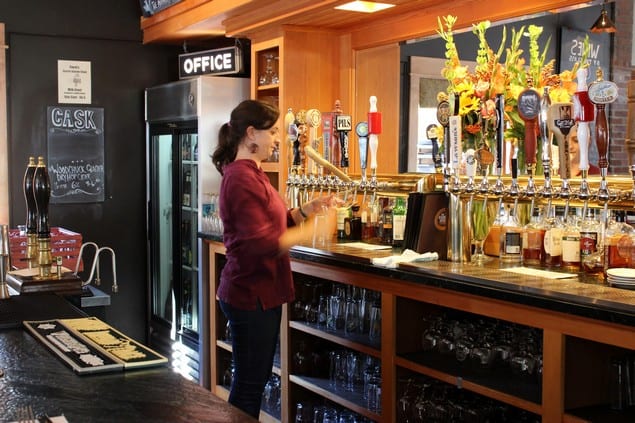 A chalkboard hanging in the dining room lists the farms being featured that day in the creative comfort food issued forth from the kitchen— dry aged LaPlatte River Angus Farm Beef Shoulder slow cooked for 20 hours and served with Nitty Gritty polenta, local arugula, and salsa verde, or Chicken & Biscuits made with Adams Farm free range chicken, local roasted veggies, and homemade buttermilk biscuits. It’s food that tastes like the best possible version of itself, thanks to the freshest ingredients and the care that goes into making these meals. Housemade charcuterie, interesting salads, and artisanal cheeses are all on offer as well, and every meal begins with an amuse-bouche showcasing a seasonal ingredient.

“Up to 75% of our food is sourced locally,” says Clayton, “which for us means that it was produced in Vermont. Some restaurants include local purveyors in that percentage, but we don’t. The majority of the food we serve comes directly from Vermont farms and producers as a raw product.” Working with a large number of suppliers presents some challenges, such as “making sure you have what you need when you need it,” says Clayton, “and it doesn’t come in tidy packages.” It’s also more expensive. But, he emphasizes, “We’re not looking for the cheapest possible food; we’re looking for the best food. They’re not really challenges; it’s just a part of what we do.” 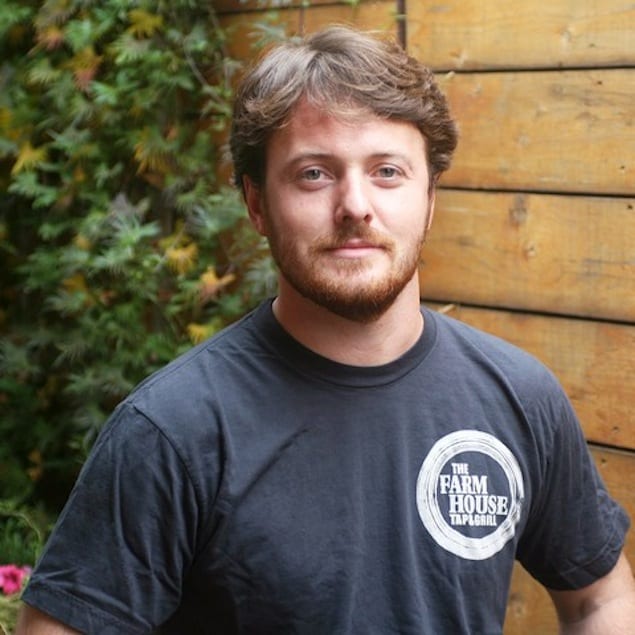 And they do it very well. True to the restaurant’s illustrious origins, burgers are its biggest draw. These archetypal burgers, however, are the inverse of fast food— a LaPlatte River Angus Farm Beef Burger topped with Landaff Creamery cheddar, local bacon and arugula, and house pickled onions on a homemade bun. Or a Vermont Heritage Grazers Pork Burger covered with Cabot cheddar, a sunny side up farm egg, and housemade coleslaw. There’s a turkey burger for those who eschew red meat and a black bean burger for vegetarians. Not to mention the special burgers, such as perfectly spiced lamb complemented by herbed feta and preserved lemon aioli. Add hand cut fries or an appetizer like Heady Nuggets (white meat chicken coated in a Heady Topper beer batter) and it’s a true Bizarro McDonald’s experience. No pink slime to be concerned about here. 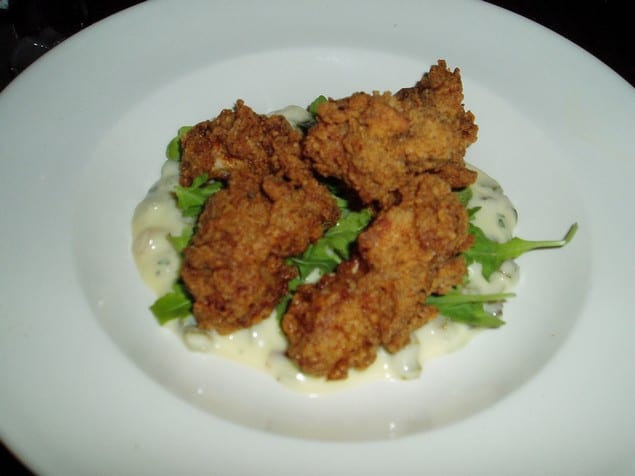 In fact, their ground beef is a custom blend of brisket, short ribs, chuck, sirloin, and part of the neck that they process in their 5000 square foot commissary kitchen where whole animals are butchered. “We started grinding our own beef last July and we noticed an immediate improvement in the quality of the burger,” Clayton explains. “But Farmhouse isn’t the reason the hamburger tastes good. If you have respect for the product, then that food is going to shine.”

Clayton, who grew up in North Carolina but moved to Vermont to attend the New England Culinary Institute, is one of four partners in The Farmhouse Group. The rest of the partnership consists of Rob Downey, Paul Saylor, and Jed Davis, who’s originally from Vermont but did stints with Daniel Boulud and Danny Meyer in New York. Recently awarded Restaurateurs of the Year by the Vermont Chamber of Commerce, the foursome has expanded their reach to include four other establishments. El Cortijo serves up locally inspired tacos in a former diner. Guild Fine Meats is a butcher shop and deli featuring housemade sausages and deli meats. Their newest restaurant, Guild & Company, is a steakhouse showcasing dry aged, locally sourced beef in a repurposed Ground Round. And in May they debut their latest venture, Pascolo Ristorante, an Italian restaurant that will specialize in homemade pasta, an opening I’m eagerly awaiting.

Despite the witty allusions on their menus, it’s clear that Clayton and his partners take their work seriously. “We’re committed to the local food economy, and to the local economy at large. If your only goal is ease and profit, then you might choose another way, but we’re taking a long-term, sustainable approach. I can’t imagine doing business any other way.” As the infamous jingle goes, I’m lovin’ it.