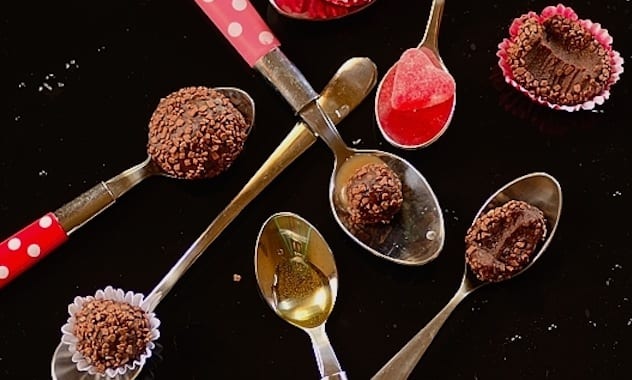 Brazilian brigadeiros, commonly known as bonbons, have only five ingredients. Made fudgy and delicious with the addition of sweetened condensed milk, this treat is a great surprise to make for your sweetheart.
By Denise Browning 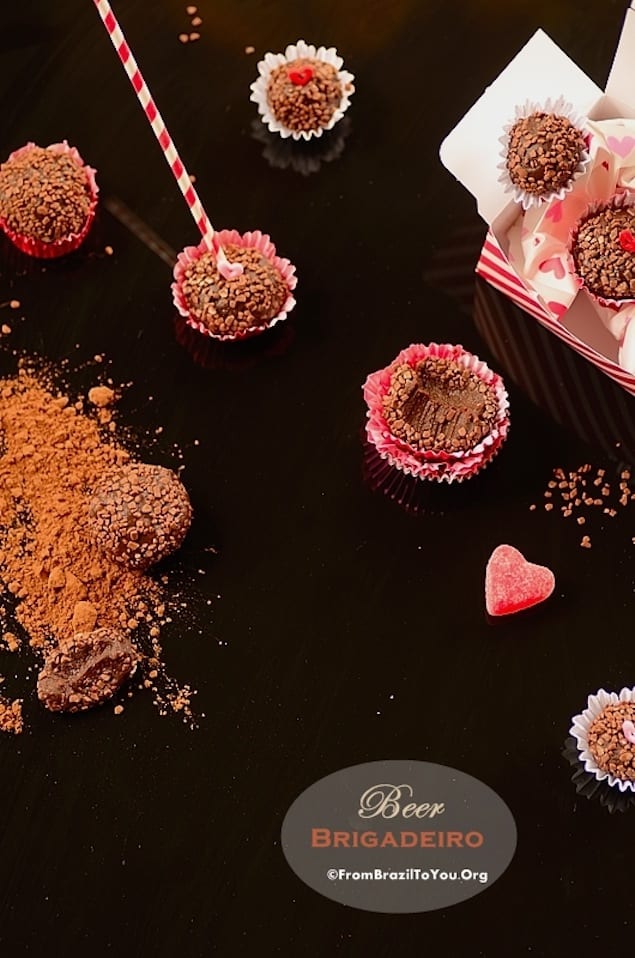 I’d like to share with you a brief history of one of the few ingredients in this recipe. Many Brazilian and South American treats are made from sweetened condensed milk – a sweetened, canned cow’s milk product that can last for years without refrigeration if unopened. Condensed milk was created in 1820 in France as a solution to difficulties in storing milk for more than a few hours. Before its invention, milk could be kept fresh for just a short while, and was only practically available in the immediate vicinity of a cow. Condensed milk only came to be produced on a large scale many years later, in the mid 19th century, by Gail Borden, Jr. in the United States. It became popular after soldiers returning home from the American Civil War spread the word. By the late 1860?s, condensed milk was a widespread success. Factories for its manufacture opened in other countries, including Canada and Australia, as well as the world’s largest, Swiss company Nestlé, which commercialized the product in cans. Thanks to Nestlé, condensed milk became a staple in Brazil, replacing fresh milk in the preparation of desserts. It is also the main ingredient for caramel flan and brigadeiro, a unique treat that technically is neither a truffle nor a candy, but as beloved in Brazil as cupcakes are in America. Sweetened condensed milk is also the preferred type of milk to add to coffee or tea in parts of Asia and Europe, among many other uses. In some Asian countries, it is spread on toast as a jam substitute. In the Caribbean, it is used to make Guinness punch. And in the US, it is a key ingredient in lemon ice box pie and in many key lime pie recipes…. And let’s not forget that it is one of the milks in tres leches cake. Beyond its affordable cost, ease of transport, and preservability, it is also a great emulsifier that will not curdle in the presence of acid.

Did you know that sweetened condensed milk can be made from scratch?
Mix one measure of evaporated milk with one and a quarter measures of sugar in a saucepan; then, heat the mixture, stirring until the sugar is completely dissolved. Let cool. It can also be made by simmering whole milk until it is reduced by 60%, then adding sugar.