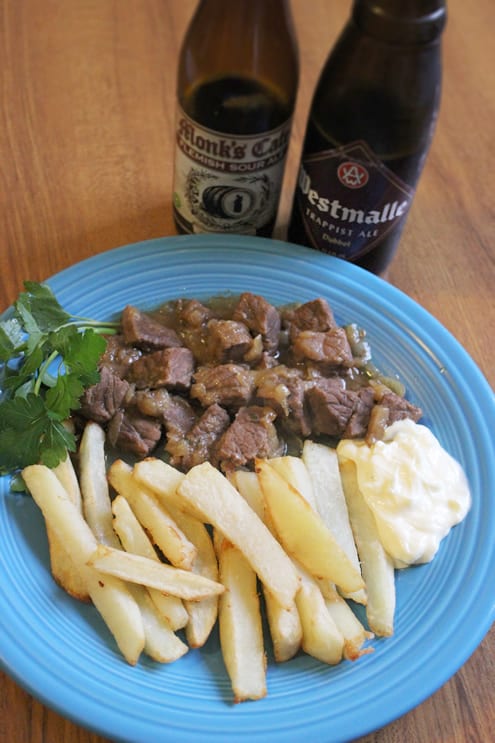 The increasing popularity of craft beer has sparked what appears to be a new culinary trend: cooking with beer.
By Melissa Maki

The increasing popularity of craft beer has sparked what appears to be a new culinary trend: cooking with beer. But brew-inspired food is nothing new in Belgium. Stoverij, also known as carbonade flamande, is a traditional beef stew from Flanders that derives its rich flavor from being slow cooked in beer. Stoverij is Flemish comfort food at its best. If you visit a frietkot (fry stand) in Flanders, you can order a side of stoverij to go along with your fries.

While stoverij recipes have the same basic ingredients, this one is inspired by Aba-Jour, a Ghent establishment known for its bountiful beer selection. Their stoverij is the best I’ve had. It stands apart because, rather than using just one type of beer, it contains a combination of sweet and sour beers, which gives the stew a deliciously complex taste. They use Rodenbach, a tart Flanders red, and Westmalle Dubbel, a rich and malty Trappist brew. If you can’t find Rodenbach, another sour Flanders red or brown ale will do. The Duchesse De Bourgogne or Monk’s Cafe Flemish Sour Ale are good potential alternatives.

Hand-cut Belgian fries and mayonnaise are the perfect complement to stoverij. If you’re feeling less decadent, whole wheat bread or boiled potatoes also pair well with the dish. Be sure to save the extra dubbel or sour ale for pairing with the meal!

Print
Prep Time
20 mins
Cook Time
2 hours
Total Time
2 hours 20 mins
A hearty but complex beef stew cooked with Belgian beer.
Author: Melissa Maki
Recipe Type: Main
Serves: 4
Ingredients
Instructions
Notes
Tip: if you like a thicker, gravy-like broth, you can try a trick used by some traditional stoverij recipes. Spread mustard over a couple of pieces of brown bread or peperkoek (gingerbread) and place them mustard side down on top of the dish as you start it simmering. It will break down while the stew cooks and thicken it.
3.2.1230

Take a Beer-Cation in Boulder