You don’t even need a recipe for this semi-homemade dessert, just assemble the ingredients and consider your sweet tooth satiated.
By Liz Swartz 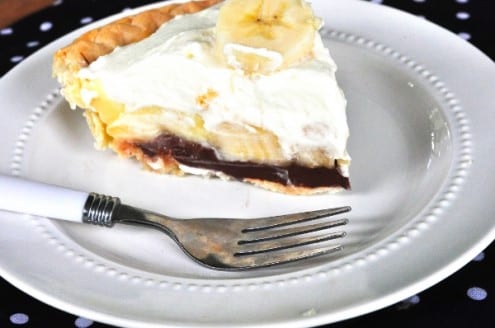 I wasn’t sure that I wanted to post this one – it was just so easy. I’m constantly torn between making things from scratch and trusting the box recipes. I’d say about half the time, the easy way works great, but there is just more satisfaction in going homemade.

Let’s be serious. Baking from scratch is mostly about bragging rights.

The other night I needed a sugar fix quick or the men in this house were going to start getting the brunt of it. I had banana pudding mix, I had a pie shell, I had Nutella. My path was clear.

But then I thought, well jeez, I can’t blog about this if I don’t make at least one part of this recipe myself. What would go well with chocolate and banana? Coconut, yup.

I got some heavy whipping cream out and whipped it until I had stiff peaks. Then I added 1/2 teaspoon coconut extract and beat it again until it was firm again.

I poked holes in the pie shell and baked it according to the instructions. Then it was Nutella, sliced bananas, instant banana pudding, and whipped cream. Then it went into my mouth.

Hardly worth a post, I know. I guess I just didn’t want you to feel alone in needing sugar desperately at 8:45 at night. I. Feel. you.