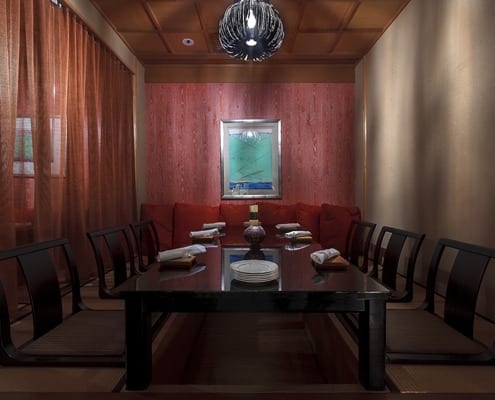 Amasia is a natural partnership between Chef Alan Wong, one of the pioneering founders of Hawaii Regional Cuisine and Grand Wailea, a Waldorf Astoria Resort in Maui.
By Michelle M. Winner

Amasia is a natural partnership between Chef Alan Wong, one of the pioneering founders of Hawaii Regional Cuisine and Grand Wailea a Waldorf Astoria Resort in Maui. “Amasia” is Chef Alan Wong’s name for the culinary convergent point the Hawaiian Islands represent between Asia and North America. Here in Hawaii he offers diners the flavors and cooking techniques of East and West cuisine utilizing Maui’s best produce, meats and bounty from the sea.

Set in Grand Wailea’s Japanese garden surrounded by 800 tons of rock from Mt. Fuji and a pond filled with koi and turtles, Amasia is reminiscent of a tea house in Kyoto. The original structure was built in Japan and brought to Maui in 1990, and reassembled. Now, following a recent $3 million renovation completed in Spring 2012, the beautifully restored restaurant features private tatami rooms, a formal dining area, a cocktail lounge, sushi bar and robata for grilled delicacies. Private label wine, sakes and fresh cocktails are deftly selected to accompany the globally inspired menu. Interestingly, some of Wong’s menu items are listed by preparation method like “‘steamed , fried, baked, raw” not always by course heading ” pupu, sushi roll, salad, soup, dessert.” Chef Wong describes dining at Amasia this way, “This menu is inspired by street food and cuisines from all over the globe. Our food will be experienced in small plates and family-style sharing portions, and our restaurant features a robata grill and a sushi bar in the dining room.”

Chef Wong, a James Beard Award winner for Best Chef of the Year for the Pacific Northwest ( 1996), has two restaurants on Oahu: Alan Wong’s on King Street, a favorite of President Obama’s; and the laid-back Pineapple Room at Ala Moana. His mission is to provide guests with a true taste of modern day island cuisine by careful selection and preparation of the freshest ingredients cultivated buy the long-term relationships he has built with purveyors, fishermen and farmers. Alan Wong’s Amasia is his third restaurant in the Hawaiian Islands.

After apprenticeship at The Greenbrier Hotel, Chef Wong worked at Lutece in New York City under mentor Chef Andre Soltner, who emphasized the importance of being a “skilled craftsman cooking with two feet on the ground.” Back in in Hawaii in 1989, he opened The Canoe House Restaurant at the Mauna Lani Bay Hotel. Forward to 1991 when he and eleven other chefs organized a group espousing ” Hawaii Regional Cuisine” in response to the constant shipping in of food products to Hawaii hotel restaurants and created a Hawaii food movement by working with local farmers, fishermen, and ranchers to supply local ingredients. The creation of HRC helped to establish Hawaii as a sought-after destination where the guest could experience ethnic-inspired cuisine made with fresh, local products.

In 1994, Chef Wong was named one of 13 Rising Star Chefs in America by the Robert Mondavi Winery for his culinary excellence. Alan Wong’s Restaurant opened in April of 1995 and in 1996 received a James Beard Foundation nomination for the nation’s ‘Best New Restaurant’. It was honored in Gourmet Magazine’s October 2001 issue, ranking #6 of ‘America’s Best 50 Restaurants’ and in 2002 was inducted into Nation’s Restaurant News Magazine’s Hall of Fame. In its May 2006 issue, Food and Wine Magazine included the restaurant among its ‘The Go List of 376 Hottest Restaurants in the World’ and in that same year was again the only Hawaii restaurant to be ranked among ‘America’s Best 50 Restaurants’ (#8) by Gourmet Magazine. It is a ten-time winner of the Hale ‘Aina Award as the state’s ‘Restaurant of the Year’. Voted by the Ilima Awards as Hawaii’s ‘Best Restaurant’ for nine years, Alan Wong’s Restaurant was inducted into its inaugural ‘Star Circle’ established for ten-time winners in 2008. Today, the restaurant continues to receive top ratings in Zagat, Gault Millau and Wine Spectator.

In September 1999, The Pineapple Room by Alan Wong opened at Macy’s in the Ala Moana Shopping Center, serving breakfast, lunch, and dinner, and banquet facilities and catering services. That same year, Chef Wong authored a cookbook “Alan Wong’s New Wave Luau” published by Ten Speed Press and in December 2010 released his newest cookbook “The Blue Tomato – The Inspirations Behind the Cuisine of Alan Wong” (Watermark Publishing).

Chef Wong believes in giving back to the community and the profession. He serves on the boards of Easter Seals Hawaii, the Hawaii Seafood Promotion Committee, Leeward Community College and the Culinary Institute of the Pacific food service programs, and the Hawaii Farm Bureau Foundation for Agriculture. He was honored in 2001 by Kapiolani Community College and in 2002 by the University of Hawaii as its Distinguished Alumnus and for his contributions to the State of Hawaii.