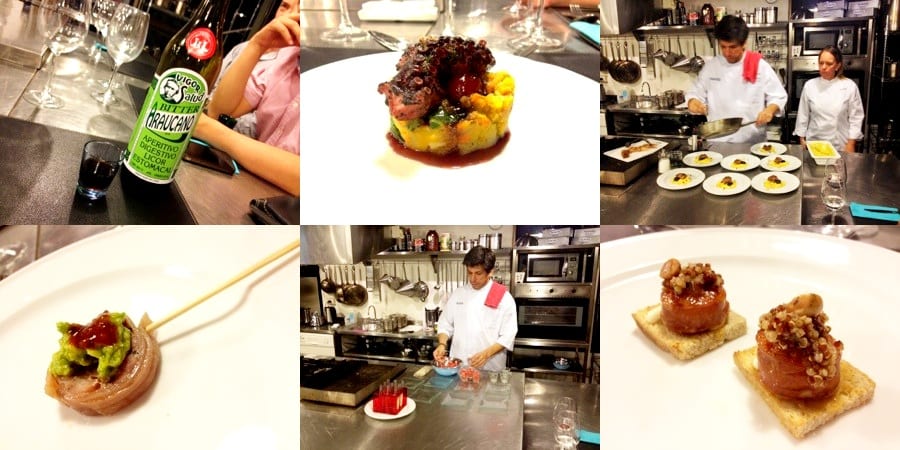 Kylie Sherriff is a passionate explorer, with a love of…

A intimate incarnation of an acclaimed restaurant provides an evening of delicious food and informative insight into traditional Chilean cuisine.
By Kylie Sherriff

After all the “puertas cerradas” options in Buenos Aires, when I first arrived here, I was keen to explore to see if Santiago had the same kind of offerings. I found a couple of mentions on the internet, and pursued one option, only to find that they had just opened a regular restaurant and were in the process of getting set up. The others seemed a little too hard to get to or to arrange.

So, when I found out that an acclaimed restaurant, Motemei, from Santa Cruz (Colchagua Valley) was moving to Santiago to operate as a “Clandestine” restaurant, I was very excited.

I made enquiries and, at CLP 40,000 ($85), it’s not cheap, particularly compared to the BA experiences. Still, with seven courses, each matched with a wine, I thought it was worth checking out, so I put my feelers out and found a few friends who were willing to fork out the money and try the experience. The booking had to be made by email and the money deposited up front to confirm the reservation. Then I received an email confirmation with the address details and we were booked in for one of their Wednesday night dinners.

The venue is a little out of the way and three of us arrived together in a cab. We didn’t find the place straight away as we were expecting a private home but, after being dropped off very nearby, we located the restaurant in what appears to be a professional showroom or catering kitchen. We made our way upstairs where places were set in a wide U-shape around a sparkling stainless steel kitchen. Our hosts, Patricio and Jennifer, were in the kitchen finalising a few details.

Arriving right on time at 8.30pm, we were “early” by Chilean standards and the first to arrive. We were expecting two more from our group, and four other guests. While we waited, we chatted to our hosts and each other and were served some water but, at this stage, it would have been nice to have had a welcome drink. After all, we were the ones to arrive on time, and it had been thirsty work getting here!

The other guests arrived one-by-one and, by 9pm, most had arrived and we were advised that we wouldn’t wait for the other couple as they were repeat guest from the winery, Anakena, from which the evening’s wine had been selected.

With this, Patricio and Jennifer began, explaining that the “clandestine” project was the product of love. With Jennifer living in Santiago, and Patricio in Santa Cruz, the couple had somehow managed a commuting relationship for many years until, finally, something had to give. Patricio jokes that, obviously Jennifer won, as the restaurant in Santa Cruz is now closed and here he is, in Santiago. The couple are looking for a more permanent location for their restaurant, but prefer to take their time to find the perfect venue and have been offering these “clandestine” experiences since January.

As they talked, Jennifer got working on some “camp” flatbread that she made in front of our eyes with very few and basic ingredients, explaining that it is how it would be done in a traditional Chilean home. Patricio explained that they keep things as traditional as possible, choosing quality over the quantity that is favoured in most “typical Chilean” restaurants.

In the meantime, he went about making “chancho en piedra”, a simple and fresh tomato salsa that would be served with the bread. He made it look easy by chopping the big oxheart tomatoes in half and grating them, leaving out most of the skin, and adding just a little salt, garlic, and “aji verde”, a small green pepper. He explained that, traditionally, the salsa is made in a mortar and pestle and only the host of the household can operate it. If the pestle is standing upright in the middle of the mortar, it’s a “no-go zone” and you have to wait a little longer before dipping your bread. Once the pestle is removed, or laid to one side, the “chancho en piedra” is ready to go. And, so it was, and our first appetisers were assembled and served.

The chefs then went about preparing our next appetiser, “la longa”, a bite-size version of the popular South American “choripan”, a barbecued sausage in bread. Patricio explained that, if he alters a dish, he gives it a new name and, since this dish contains a quinoa pebre and is an obvious variation to the large and filling choripan, he has called it “la longa” after the traditional Chilean longaniza sausage.

It was served on a square of “pan de campo” or camp bread, with a dob of homemade mayonnaise, the slice of quickly fried longaniza, the quinoa pebre, and topped with a tiny, roasted Chilean hazelnut.

It was delicious and, true to Chilean asado form, both of these first two dishes were served with beer, in this case, a small glass of pilsener.

The next dish had been largely pre-prepared, being a smaller version of “arrollado”, a Chilean dish containing pieces of pork wrapped tightly in pig skin. OK, so the description alone might not excite you but, having seen this dish around and not been game to try it, I was keen to try it in this controlled environment. Patricio explained the difficulty and time required to make this dish, from sourcing the right cut of pig skin from the butchers (the tender belly of course), to the handiwork of preparing, rolling and cooking it. The traditional ones are rolled as large as saucers, so Patricio’s smaller version requires much finer handiwork. Then, the final touches. The mini arrollados were skewered, topped with avocado and aji rojo (red pepper) and, voila, we had arrollado “lollipops”.

Several lollipops were served to each person, along with our first wine of the evening, a Viognier which paired well with the fattiness of the pork and the creaminess of the avocado.

Our next entree was scallops in a mango sauce, with the scallops promptly seared in front of us and served in Chinese spoons, topped with the salsa. The scallops were served with their roe, which I was not game to try, but the scallop itself was nice with the sweet-sour taste of the sauce, and a white blend of Riesling and Viognier was an interesting and enjoyable combination.

Next up was the first of our main courses, chargrilled octopus served on a traditional Chilean side called charquican, a puree of pumpkin, potato, carrot and silverbeet. This version of charquican was quite rustic, leaving chunks of the individual vegetables visible and identifiable to the diner’s eye. The octopus was a crowd pleaser, and there was a lot of discussion about its pairing with the puree, with no clear conclusion as to its suitability. The wine was a Pinot Noir, a little on the light side for my tastes, but a good match for the course.

The next main was lamb, which always has potential to be a favourite for me, and it was rolled in toasted quinoa flour and pan cooked in front of us. It was served on a bed of corn puree, creating a deconstructed “pastel de choclo”, or corn pie. Although the corn had had no sugar added to the puree (unlike many traditional versions!), Jennifer bruleed some on top with a blowtorch before serving the lamb. The lamb was lovely, and while the corn was still too sweet for my tastes, I’m sure any self-respecting Chilean would love it. The wine was a lovely Carmenere which was perfect for the lamb.

As Patricio talked about the different regions from where the dishes come, and indicated where our next course was from, one of my dinner companions, tongue-in-cheek, guessed the first dessert correctly – watermelon with toasted flour! In this case, the carefully prepared balls of watermelon were served with a test-tube of toasted quinoa flour, and a shot of pisco, Chile’s national liquor. Our instructions were to use our skewer, dip the ball in the pisco, and roll it in the toasted flour. It was certainly a pretty and vibrant dish, refreshing after the main courses, and although the combination of the fresh fruit and toasted flour is odd for a foreigner, I liked it. Of course, the remaining pisco had to be polished off to finish the course!

The second dessert and final course was a “calugon de chocolate”, a thick and rich slice made from bitter chocolate with a touch of cinnamon, and aliño completo and merken (Chilean spice mixes) , and topped with passionfruit. The combination of the bitter-and-spiced chocolate with the sweetness of the passionfruit was good, even for a non-chocaholic like me, and it was served with a sweet late harvest Viognier.

To finish off our meal, we were served a traditional Chilean digestive, Bitter Araucano, which is strong and herbal and best taken in small doses.

At that time, Patricio asked each of the seven diners to comment on their favourite dishes, and provide any other feedback on the evening. For me, not being a fan of the seafood dishes, the clear favourites were the bite-sized “la longa” and the arrollado lollipop, a civilised opportunity to try something that I’ve never considered looked (or sounded) very appetising. For many, the octopus and the scallops had been clear favourites. Better still though, was the opportunity to see the dishes prepared, and hear the tradition and origin of each one.

After a little more banter, and a small top-up of a previous wine to wash away the taste of the bitters, the night was brought to a close. General consensus was that, in addition to eating some good food, Motemei had provided an informative insight into the traditional dishes from various regions of Chile, interesting for the foreigners and, at times, nostalgic for Chileans.

Kylie Sherriff is a passionate explorer, with a love of travel, culture, food and wine. An "off-the-beaten-track" traveller, who likes to dig a little deeper, stay a little longer, eat "outside the town square", and truly discover and enjoy local foods and customs. In 2012, Kylie left the confines of the corporate world in Australia to pursue her passion for food, wine and travel. After a truly-foody few months in London, France (Bordeaux, Champagne, Tours, Paris), San Sebastian, and Buenos Aires, she is currently hiding out in the wine capital of South America, Santiago, and exploring ways to share her passion with others.