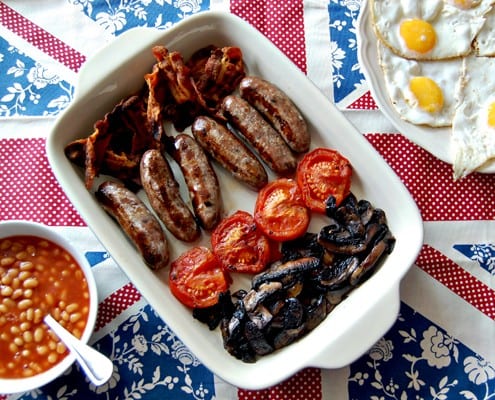 Welcome the new year by conquering the Everest of Breakfasts – The Full English.
By Ruby Moukli

A new year dawns and with it a new start. Fresh aspirations, resolutions and determinations are awash in your head, swimming in a whirlpool, creating a distinct whooshing sound that’s so loud it’s going to implode your brains… or is that the remnants of last night’s revelry? You’ve got a helluva hangover, haven’t you. Well, you’re in luck. In Britain, there is a tried and tested hangover cure: The Full Monty.

When you hear ‘the full Monty’ you automatically think of steel workers on stage, ripping off their leather trousers, right? Yeah, me too. But here in the UK, ‘the full Monty’ is a phrase that far predates that film. It means ‘the whole shebang’, going ‘whole hog’, the ‘whole nine yards’ in American-speak. Now, that can refer to getting butt-naked, of course, but it is also used to denote a breakfast that has just about everything in it you could eat and more. Legend has it that, while planning the D-Day Normandy invasion, Field Marshall Bernard Law Montgomery (‘Monty’) was in the habit of eating huge breakfasts (hence the name), but the breakfast itself predates him.

More often called the ‘Full English*’ or a ‘fry-up’, this is the fuel that the country runs on. It is the breakfast of blue-collar workers across the British Isles, served up in greasy ‘caffs’ (diners) along with sweet, milky tea, and it is what you’ll be offered when you stay in a British Bed & Breakfast.

The typical ‘Full English’ consists of bacon, sausage, fried tomato, fried mushrooms, toast and eggs ‘how you like them’.  The sausage will sometimes be replaced or supplemented with black pudding – I used a blood pudding sausage, which was a hybrid of regular pork sausage and blood pudding. Oh, and let’s not forget the baked beans. Yes, that’s right. Baked beans. All served up with toast (or sometimes fried bread, just in case there wasn’t enough fried food in there), a selection of jams and marmalade, tea and/or coffee. There, naturally, several regional variations. (For a full discussion of these, please go to Wikipedia. I just made a donation, so may as well take full advantage!) 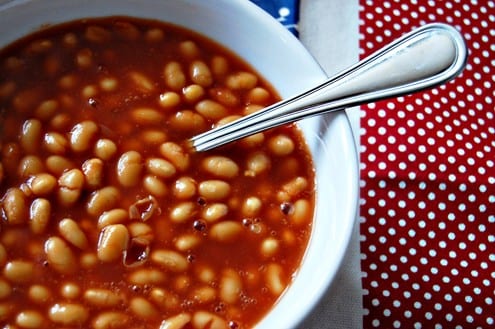 Even after living here for a decade, I rarely make these breakfasts. I’ve had them, of course, or at least some of their components, when we’ve played tourist on overnight road trips. The irony is that my ideal breakfast is really very simple – a crust of good bread, apricot jam and coffee. But for some reason, when the Full English is offered up, I just can’t refuse. The complete antithesis of my ideal and yet totally irresistible – why? I think it’s like George Mallory said when asked why he wanted to climb Mount Everest: “Because it’s there.”

Yes, this could easily be called the ‘Everest of Breakfasts’ – very challenging indeed. And not just to the eater. I certainly have a great deal of respect for the hard-working B&B owners across the country who do this every day. The main problem, for me at least, is timing. So many bits and bobs to cook up and then keep warm while you’re doing the rest. Frankly I’m quite happy to stick to our old pattern of enjoying it once in a blue moon, in a good old British B&B. But if you’re not local, and have a hankering for the mother of all hangover cures (whether you actually have a hangover or not), then here’s the list of things you’ll need:

Bacon and Cheddar Puff Pastry Round

Eggs, scrambled or fried (1 or 2 per person)
Tomatoes, halved and then fried (1/2 per person)
Sausage and/or blood pudding (1 per person)
Bacon – The British traditionally use back bacon, or what is called ‘Canadian’ bacon in the US. I use what they call here ‘streaky’ or ‘crispy’ (American-style) bacon and actually that is becoming increasingly popular in the UK. (1 or 2 strips per person)
Mushrooms, sliced and sautéed in butter (I used 1 portobello per person)
Baked beans (1 can for 4 people)
Toast (2 slices per person)
Selection of jams/marmalade
Coffee/tea/orange juice

Oh, and a defribillator, just in case… 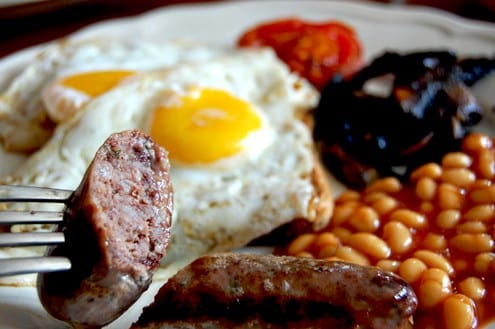 *Obviously Britain includes Scotland and Wales, where the terms ‘Full Scottish’ and ‘Full Welsh’ are respectively preferred. I used ‘English’ because that is the way it is known to most people outside Britain.