Thit Kho Trung – The Other National Dish of Vietnam

As you may have heard, February 21st is Mardi Gras, Fat Tuesday or, as it’s known here in Britain, Shrove Tuesday. No matter where in the world you celebrate it, or what you call it, it’s traditionally a day when Christians clear the pantry of ‘heavy’ foods in preparation for the austerity of Lent, that begins on Ash Wednesday. The preceding period of gluttony is often accompanied by heavy drinking and much merriment, as the holiday offers a chance for otherwise pious observers to ‘let it all hang out’. In Brazil they eat Nega Maluca, drink Caipirinhas and dance the samba in thongs for Carnaval.

In Venice, masked phantoms glide along the canals in gondolas, munching on frittelle (or cenci). New Orleans, of course, is home to Mardi Gras parades and excesses. Party-goers there drink Hurricanes and bare their breasts (and other bits) in a bid to grab the best beads. And then there’s Merry Olde England…

Here we have Pancake Day. Sure, it may pale in comparison to the wanton revelry enjoyed elsewhere, but it has a certain charm.  Some wild and crazy villages even host pancake races, the oldest being in Olney, Buckinghamshire and dating from 1445. You line up, with a pancake in a frying pan, and run along as fast as you can while flipping the poor unsuspecting pancake repeatedly. You can watch last year’s here. Yeah, Rio’s got nothing on us.

OK, so it’s a bit, well, tame. I actually love Pancake Day because I had an English mother who stood at the stove every Shrove Tuesday and happily flipped pancakes for us. It was a treat we looked forward to and took full advantage of. It was always a sort of competition to see who would tire first – she of flipping or we of eating. We never won. Except that we did – because we got all the pancakes!

English pancakes are similar to the French crêpe, and are traditionally sprinkled with caster sugar and a squeeze of lemon, then rolled. I still like them best this way, although I have tried several variations, including spreading them with Nutella or jam. Recently I stacked them up with a layer of lemon curd between each one and made a fancy feature of them. But today I’m giving you the old English classic. 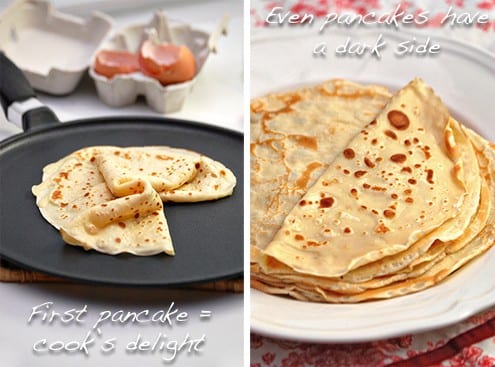 Thit Kho Trung – The Other National Dish of Vietnam