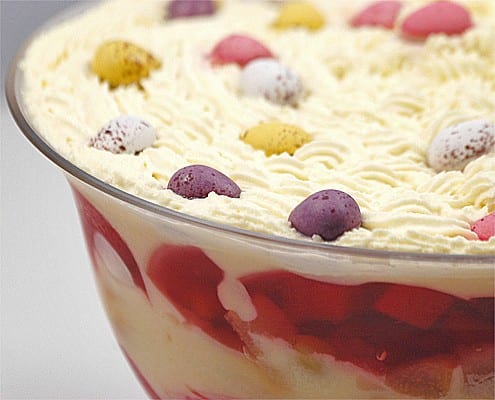 Ruby Moukli serves her own take on her Nan’s fantastic Easter Trifle.
By Ruby Moukli

Do you remember that episode of ‘Friends’ where Rachel makes a ‘Traditional English Trifle’ with a layer of ground beef because she confused the recipe with Shepherd’s Pie? Luckily we’re not all as ditzy as Rachel and, when recipes cross borders, most people do get it right.

My British grandmother brought this trifle recipe over to America from England when they emigrated in the early 1960s. The recipe has the stamp of post-war rationing all over it. Full of store cupboard finds, the only fresh ingredient is the whipping cream on top. Over the years I think the original ingredients were replaced with American ones, such as instant ‘Jell-o’. The result is a cheap and cheerful, and very easy, dessert that looks deceptively difficult to the untrained eye. Perfect for occasions when you want to impress, but have a million other things to be doing than slaving over one dessert all day.

I suppose I could try and recreate the original from scratch, in a misguided search for purity. I say misguided because I know the result wouldn’t taste anything like what I’m used to from Nanny’s trifle. Let’s face it, when I make Nan’s trifle I want Nan’s trifle. I want to relive the combination of flavours, textures and sensations that is unique to her recipe and that brings back floods of memories of gleeful childish gourmandise.

So I make this hybrid recipe every year. It wouldn’t pass muster with the food police, full as it is of processed and prepared ingredients. But you know what? There’s a time and place for everything, even guilty pleasures like this one. I serve it once a year, often at Easter rather than Christmas (as is traditional in the UK) because, to me anyway, it feels a lot more like spring than winter. And it is consumed in grateful silence by family and friends, even the gourmets among them. Come to think of it, they’re probably just glad I left out the ground beef. 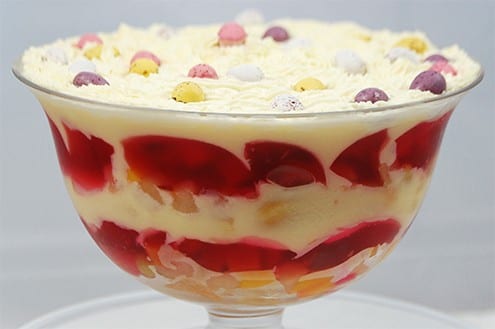 Print
Makes one large trifle (as pictured). All measurements are very relaxed, as much will depend on the size of your serving dish and whether you're making one large trifle or individual ones (in wine glasses or champagne flutes for example).
Author: Ruby Moukli
Ingredients
Instructions
Notes
1. Nanny decorates her trifles with the more traditional glacé cherry halves and slithered almonds, but I like to use the chocolate eggs (as above) for Easter, or else fresh fruit or flowers. Be creative! 2. Trifle is best when made the day before you plan to serve it, but only add the whipped cream no more than a few hours prior to serving or else it will droop and look sad. 3. Yes, I serve this to my kids complete with sherry. What little there is in each portion is negligible (no more than cough syrup anyway) but if you're uncomfortable with that then by all means leave it out (or make two - one with booze and one teetotal).
2.2.1