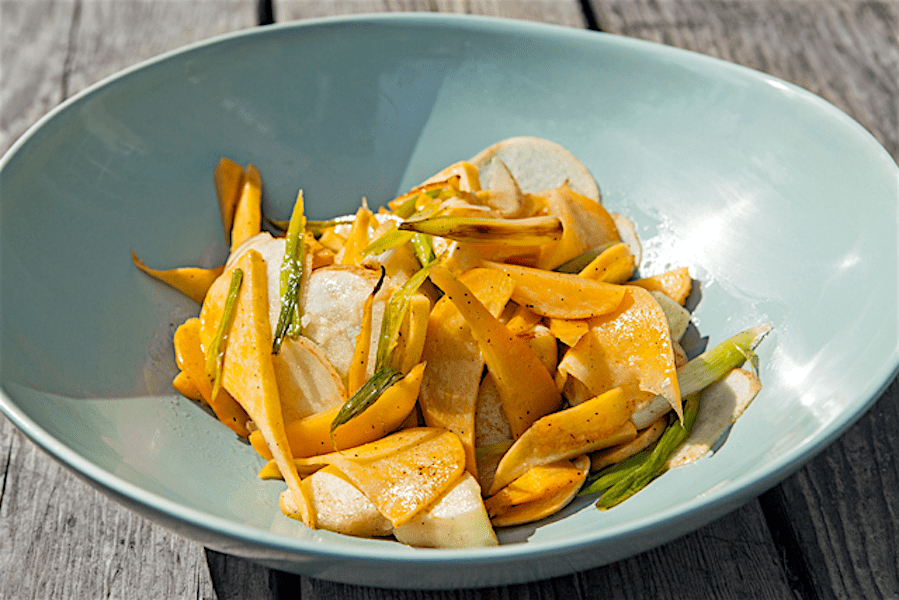 Panna is the ultimate cooking resource, featuring hundreds of HD…

Root vegetables are making a comeback. Here are eight that you should know about and how to cook with them.
By Panna Cooking 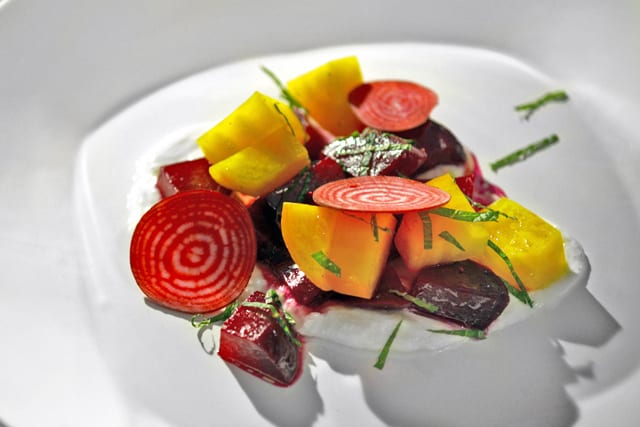 If vegetables were cast in a mega-blockbuster action movie, it wouldn’t be that hard figuring out how to assign the parts. The starring role would go to a perennial superstar, say a macho crown of broccoli or a smooth-talking lettuce. In the supporting role, you’d have a young, upstart ingénue—that would be kale, duh. But what about the minor character who gets one line before being meeting an untimely demise? Or the background extras? They would be a scrappy crew of daikons, jicamas, and Jerusalem artichokes.

Root vegetables have never had a ton of star power and are woefully short on looks and charisma. (Celery root literally could be a stand-in for Jabba the Hutt.) But what root vegetables lack in immediate charm, they make up for in character: “They’re ugly,” says New York Times writer Melissa Clark of celery root. “That’s part of their charm.”

More: Get 7 recipes that put root vegetables in the spotlight.

It’s not just Clark who finds root vegetables endearing. Chefs across the country have been finding ways to feature under-loved and overlooked specimens on restaurant menus, especially during the colder months, when roots are among the few fresh produce items you’ll find at the farmers market.

And at Panna, we think they’re worthy of a place at your dinner table, too. Here are eight surprising breakout stars worth checking out. 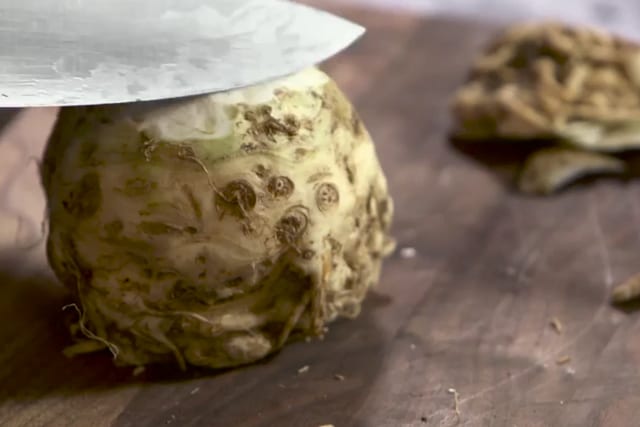 Celery root, a.k.a. celeriac, a.k.a. that scuzzy thing at the bottom of your CSA box, might just win the title of least photogenic food ever. It’s a true powerhouse in the kitchen, however: Anything a potato can do, celery root can do too (and often better). It takes well to being fried, crisping up at the touch of hot oil, and gets pleasantly tender when steamed or simmered.

Taken from a plant that is different from (though related to) stalk celery, the root has echoes of the slightly saline taste of the green vegetable. That salty-savory warmth really shines through in soups and mashes, as it does in Michael Anthony’s Celery Root and Apple Puree.

When dug straight out of the ground, salsify roots aren’t exactly charmers: thin and gangly with a coat of scraggly side roots, they resemble a rugged woodsman in need of a good shave. If you give them a trim with your vegetable peeler, though, they’ll clean up nicely, revealing tender, white flesh beneath.

Salsify is sometimes described as having an oyster-like taste (hence its nickname, “the poor man’s oyster”). But it’s got a bunch of lovely and intense garlic and asparagus overtones going on, too. You can chop salsify coarsely for soups or boil them for a hearty purée, but—like many other things—salsify might just be best simply browned and caramelized in butter.

In Japanese, daikon literally means “big root.” The name fits well because the chubby radishes, which are used throughout Asian cuisines, can grow to be over a foot long and several inches in girth.

On its own, daikon has a slightly bitter and spicy bite to it. But it also absorb flavors easily, making it great for pickling or simmering in broth. In recipes like Anita Lo’s Brisket Noodle Soup with Korean Chili, for example, the root becomes all sorts of tender and juicy while taking on the beefy oomph of the cooking liquid. 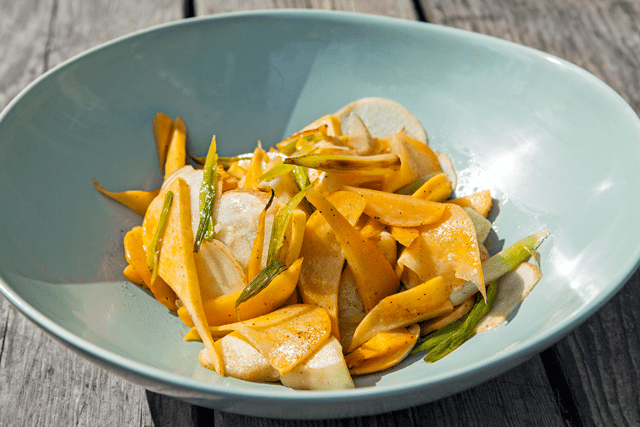 Turnips are hardly the new kid on the block—they’ve long been a staple in the sorts of hearty, stew-y dishes that bring to mind steaming crocks and wintry nights. But there’s something about how they’ve been turning up in recipes lately that feels fresh and new. Take, for example, these Roasted Turnips and Apples with Honey, where Michael Tusk explores their sweeter side. Mild, with a lightly peppery kick, they can be puréed, pickled, roasted, simmered, or simply sliced and eaten raw, making them one of the most versatile vegetables out there.

10 Festive Holiday Recipes Made with Tea

Taro isn’t exactly the most approachable root: It can’t be eaten raw, plus it requires careful peeling and thorough cooking. But if you steam, simmer, or fry it well, you’ll understand that the effort is well worth it. It’s hard to describe taro’s unique flavor to the uninitiated: there’s a pronounced nutty taste backed up by notes of vanilla and musk, which merge into a flavor profile that’s astonishingly complex for such a humble tuber. The dense, custardy texture also makes it feel quite decadent.

Taro is a staple throughout Asian, Pacific, African, and Latin American cuisines, in which its starchiness often used to soak up and offset strongly-flavored sauces and seasonings. In Asia, you’ll also find taro as a filling in cakes and other sweets. 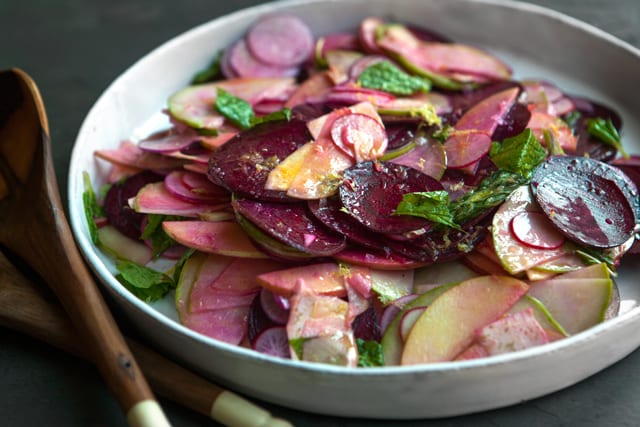 The world seems to have finally come around to the fact that beets are good for so much more than just borscht. Available in shades from deep purple to golden, they also have an appealing sweetness. Although you can roast, steam, or boil them, we’re addicted to their raw crunch. Try slicing them thin with a mandolin and and tossing them in a Shaved Root Vegetable Salad from Seamus Mullen.

Jerusalem artichokes (also known as sunchokes) are not artichokes, nor are they native to the Levant—they’re from a flowering new world plant that is a part of the daisy family. Regardless of their deceptive name, the knobby roots have managed to let their true colors shine in a big way: nowadays, it seems like every new American restaurant menu features them in some shape or form during the fall and winter months.

It’s easy to understand why chefs go gaga for Jerusalem artichokes: They have a built-in buttery flavor, accented by a nutty, earthy richness and a hint of sweet. Plus, they’re low in starch, so they don’t feel quite as stiff and mealy as potatoes or other floury tubers. Jerusalem artichokes are great roasted whole or puréed into soups. 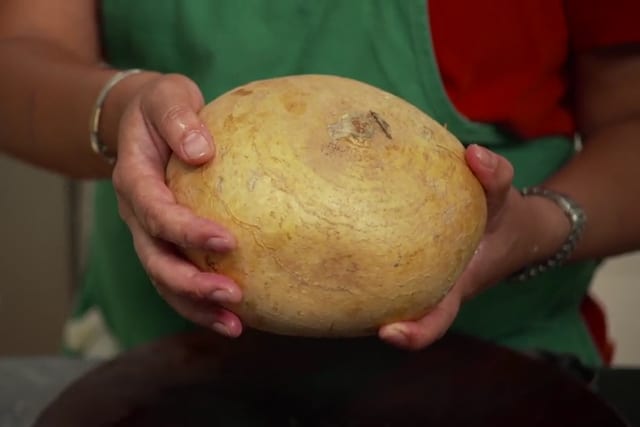 If you really want proof that roots can be crazy, sexy, and cool, look no further than jicama. Native to Mexico, the bulbous, brown vegetable has surprisingly juicy flesh reminiscent of an Asian pear. For the most part, jicama is eaten raw, adding an uplifting touch to salads and more. It’s especially suited for the citrusy punch of ceviches and seafood salads—we’re personally fans of it in Rick Bayless’ Mexican-style shrimp cocktail, where it provides a cooling contrast to the recipe’s heat and spice. But it can cross over into dessert territory as well, fitting in seamlessly next to almond jelly and tropical fruits in one of Anita Lo’s dreamy creations.

Panna is the ultimate cooking resource, featuring hundreds of HD video recipes by celebrity chefs. Visit us at pannacooking.com or join 1 million home cooks on our app for iPhone and iPad.