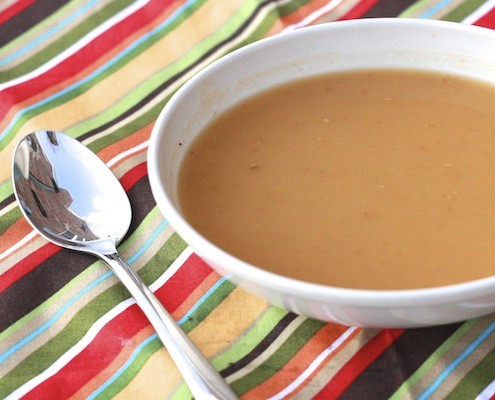 I am all about soup for dinner. Paired with salad or bread (preferably both!), it makes for a (usually) healthy meal. Even better, most soups can be made ahead of time and then re-heated just before serving. Even better than that, most soups make large batches and the leftovers can be frozen. I seriously love planning my meals for the week and knowing I have soup I can pull out of the freezer to thaw the night before we want to eat it.

This sweet potato soup is another one to add to my growing list of soups and stews! I have a favorite creamy sweet potato soup that I frequently make—it’s definitely a household favorite. This time I branched out and tried a new recipe, courtesy of Food and Wine magazine.

I doubled the recipe which meant there was enough for 4 of us, plus extra for freezing. The flavor in this soup was fantastic—spicy and smoky from the chipotle pepper, but with a bit of sweetness from the apples. My only complaint was the texture. I prefer a thick soup and the water added to this one makes for an incredibly thin and runny soup. My recommendation is to start with broth only and add additional broth or water after you blend it, based on how thick you’d like it.

Any favorite soup recipes you’d like to pass along to me? There’s LOTS of winter left (ugh), meaning lots more soup-making and eating!